Scott Morrison now claims to be strongly anti-racist, but won't — and can't — rule out his party directing preferences to One Nation ahead of Labor.

Scott Morrison is dodging and weaving on One Nation preferences, but he has a real problem that won’t go away until he declares that Hanson’s white supremacists and fascists will go last on all Liberal and LNP ballots.

The fact that the LNP wants to put Labor and the Greens below Hanson up north even after events in New Zealand is going to inflict real damage in metropolitan Queensland and in other states.

Just ask Colin Barnett, who has first hand experience of cuddling up to Hanson and her grubs and now rues the day.

Labor has made its position clear: Hanson goes last, end of story. Morrison’s position is a dog’s breakfast. He won’t do a deal with Hanson, he repeatedly says — a non sequitur given the question is never about deals, but about putting One Nation last. Then he says you can’t decide on preferences until you see who is standing in each seat, because someone worse might come along. To which the simple answer is, fine, then your position would be that One Nation goes last unless there’s someone even more toxically racist on the ballot, in which case One Nation goes second last.

The next fallback is that preferences are a matter for state executives — the sort of limp reasoning Michael Daley tried to use over NSW Labor’s toxic preferencing of the far-right Shooters Party.

Yesterday, Morrison tried a third approach — that Labor had done deals with One Nation. “The Labor Party did a preference deal with One Nation that saw people like the Member for Dobell elected into the parliament,” he told the ABC. This was a lie, one Labor immediately briefed the Press Gallery on, and Morrison was rapidly fact-checked — though by News Corp, not by the ABC, much of which seems terrified of performing basic journalism on the Liberal Party.

The issue should be pretty straightforward for Morrison, who is now in furious denial about his long history of exploiting racism and insists he’s now a tribune of peace on earth and goodwill to all men (and women if any manage to get elected). And you can’t pose as an opponent of tribalism, extremism and racism while rewarding at the ballot box a party that is definitionally tribalist, extremist and racist.

Indeed it’s quite possible Morrison dearly wants his branches to put One Nation last, if only to bolster his credentials as a latter day anti-racist. But many of his Queensland colleagues are desperate for preferences from One Nation, which is still polling around 10% in that state, and have been telling journalists they want to see Hanson and her racists preferenced by the LNP in return — which is exactly what the LNP did in the 2017 Queensland state election in nearly every seat, and in the Longman byelection last year, when the LNP put Labor and the Greens below One Nation.

Morrison also lacks the authority to dictate preference decisions. Malcolm Turnbull didn’t have the authority to demand WA and the LNP put One Nation last and an apparently interim leader like Morrison certainly won’t.

He’ll thus enter an election campaign persistently dogged by the question of why his party is telling voters to support racists over mainstream parties, especially in Queensland. And don’t think voters in Brisbane and Sydney and Melbourne and Adelaide and Perth won’t notice. Morrison can fudge and dodge and even lie, but he better get used to being asked about Hanson and the vile creatures that ride on her coattails. 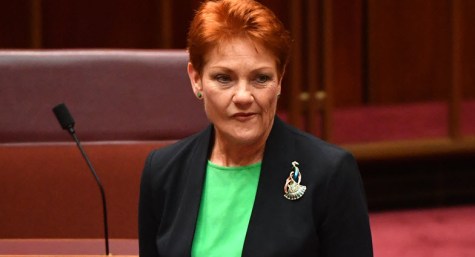 I think football is the winner.

Word has it that Pauline had another name in mind for her party, however, AFP was already taken by the Australian Federal Police. In one nation’s case, AFP stood for Angry F..kers Party.

Well obviously there are no viler creatures on the horizon, the LNP won’t do us all a favour and put themselves, deservedly, last!

So, Scott et al., your choice is really quite simple. Do you want the votes of people who first up support a woman whose whole political career has based on right-wing racism and bigotry (clue as to those voters views here) or do you want to send a message? Still too hard? Okay, know, here’s another option, let’s think of those voters as extremist Islamic State supporters. Would you happily accept those votes? Of course not, right. So, simple answer, ah.