Former MP's climate comments make no sense, observing some potentially weird vertical integration at Nine and Crikey wants to know how you're being pork barrelled.

Turnbull, Love Island and pilates: it’s 2019! During his political career, Malcolm Turnbull was well-known for his flexibility (see climate change). Now as a retiree he’s turned to pilates to keep that flexibility up. Turnbull, apparently a regular patron, was on hand to unveil the Elite Spinal Physiotherapy and Pilates Studio in Sydney’s Bondi Junction this week. After making a speech, Turnbull was slated to welcome guests, who included celebrities like a former Love Island contestant, and some “influencers”. Perhaps in return, the Elite Studio helped locate the spine which eluded Turnbull for most of his prime ministership.

New South Wales of a time. Ah, election season — the services and infrastructure equivalent of Christmas, with the government delivering presents to all the kids who have been nice (enough to live in a crucial seat). We here in the Crikey bunker like to keep an eye on what’s being promised and delivered as an election approaches — and with the state poll in New South Wales fast approaching, we want your tips. Are you a marginal seat dweller suddenly finding your kid’s public school canteen is being given gold fixtures and serving fois gras? A safe seat holder being kept happy with lots of spending? Or does your area regularly vote the “wrong” way by such a margin that the government appears to have given up trying to sway you? Let us know any notable developments in your area here.

Great Scott! Yesterday, Crikey dedicated our whole edition to climate change, the possibility of real action, and how the debate became as deformed as it currently is. And The Drum on Wednesday gave us a great example of just that: “Renewable energy itself is great and works 20% of the time. What about the other 80%? Yes, renewable energy is the cheapest form of energy, the other 80% of the time you’re using battery backup and storage. That’s where it becomes hideously expensive,” former member for Lindsay Fiona Scott informed us. Where does she get this number? What is this based on? Why, indeed, is she being asked?

As quite a few people better versed in renewable energy than Ms Tips have pointed out — it appears that her comments were completely fact free. Man, Ulhmann. It couldn’t be, could it? Nine’s political editor Chris Ulhmann — with his nonsense about windfarms, his history-lite takes on Marxism and Cambodia, his “couch-ercising” — has been a reliable source of both laughs and annoyance in the Crikey bunker, but surely he’d not go so far as to shill for a reality TV show broadcast by his employer? In a column which sets out the major issues facing the Coalition in this election year, he ends, apropos of nothing much, with this:

Barnaby Joyce’s declaration that the Nationals “are not married to the Liberal Party” ignores the fact that, in Queensland where brand differentiation matters most, the parties are locked in a loveless formal union. It is a structural problem which can’t quickly be undone and guarantees that the campaign will be full of Married at First Sight moments.

The column is titled “Libs face state backlash” in the paper but online, they make the reference more explicitly, with the headline “Many MAFS moments ahead in federal campaign”. What does that even mean? Surely, he hasn’t just shoehorned in a reference to one of Nine’s highest-profile shows for the sake of it? The reference is so clumsily made, and so unrelated to anything else in the piece, one wonders. At least they refrained from adding a note about when the show is screening.

Something big coming in Victoria? Here’s MP Luke Donnellan launching accessible toilets at Hamer Hall. Obviously Ms Tips agrees that it is good to have accessible toilets in Hamer Hall. But do they need announcing? That’s like calling a press conference to say you’ve put fire alarms in the orphanage. It makes sense once you know the government is about to privatise dialysis care in Victoria. This is gender neutral pedestrian signs and rainbow crossings for Pokemon Go characters all over again. The weaker the progressive announcement, the more comprehensive the neoliberal move coming. This is the Andrews government’s distinctive contribution to Labor governance. We wait with interest for the next one… 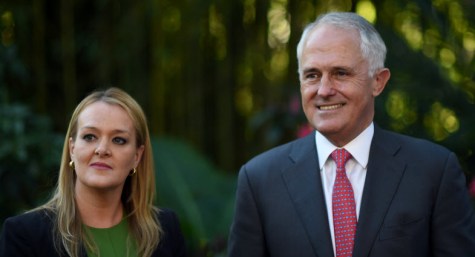 “The Dum” – What was Abbott’s “ringing endorsement” of Fiona Scott?

“Perhaps in return, the Elite Studio helped locate the spine which eluded Turnbull for most of his prime ministership.”

Now, now, that’s unfair. Turnbull wasn’t spineless. He stood up extremely well for the one principle he actually believes in, the greater glory of Malcolm Turnbull and his entry in Who’s Who. People who think Turnbull’s fault was being spineless and betraying his principles are still being suckers for the Turnbull mythmaking.

“Chris Ulhmann” Got to have been one of the inspirations for this week’s Get Krackin’s savage parody of the dickhead male TV host, right, with the couchercising spot? Along with Stefanovic, and possibly Michael Rowland (at the very least, Michael Rowland’s wardrobe)?

And hey, very appropriate for Uhlmann to get a mention right below another story about made-up facts on renewable energy!

“This is the Andrews government’s distinctive contribution to Labor governance” So Crikey isn’t yet tired of being made to look foolish in its coverage of Victorian state politics and Daniel Andrews, eh?

Chris ulhmann had a go about the SA power outages a few years ago too. Non factual of course.

A wonderful example of inappropriate celebratory openings by pollies is a bunch of UK tory seat warmers having the gall to stage photo-ops at the increasingly ubiquitous food banks throughout the Septic Isle.