How did it become the norm to ridicule scientists and media outlets that report on climate change?

News Corp is the home for climate denial in Australian media. With sceptics Andrew Bolt, Miranda Devine, Terry McCrann and Tim Blair as columnists, and Graham Lloyd as The Australian’s environment editor, the parent company of Australia’s most-read and influential newspapers provides a regular megaphone to denialist theories.

In the past year alone, The Australian (News Corp’s national broadsheet) has run stories by its environment editor Graham Lloyd that have: 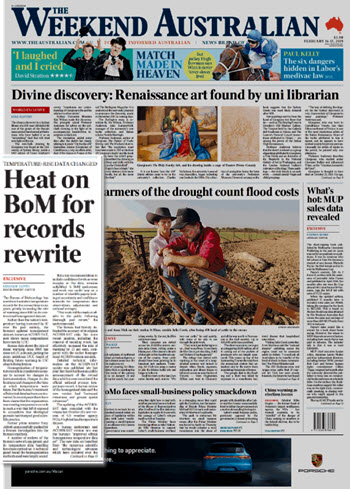 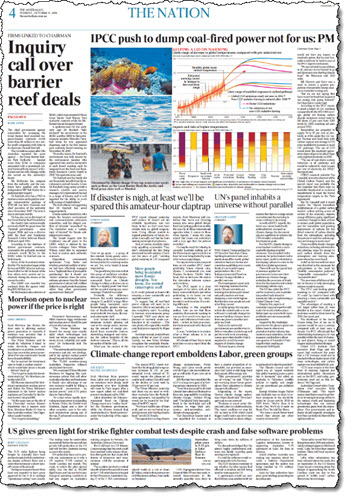 Of all News Corp’s Australian titles, it’s The Australian’s science news coverage that’s most often picked up for pushing climate denialism. Instead of giving most weight to the scientific consensus, it gives credence to scientific outliers, as with Lloyd’s Great Barrier Reef story.

Lloyd’s reporting is a regular fixture on the ABC’s Media Watch, as well as the focus of other media observers (including Crikey). But The Australian and its tabloid stablemates also use their opinion pages to ridicule scientists and media outlets or journalists that report on climate change.

The Herald Sun’s Andrew Bolt refers to those who believe the accepted climate science as “warmists”, while his Daily Telegraph colleague Miranda Devine blames bushfires (including 2009 the Black Saturday bushfires) on “green ideology” and rejects any connection between climate change and extreme weather events. 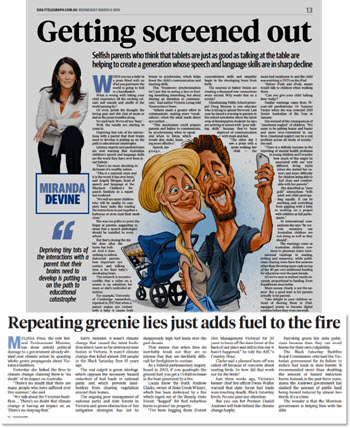 Bolt and Devine both have regular broadcast commitments on News Corp’s Sky News.

The local newspapers’ denialism follows a global pattern for News Corp products — a 2012 analysis found that climate coverage by Fox News and The Wall Street Journal were “overwhelmingly misleading”.

Researchers from the University of Melbourne studied opinion pieces and letters to the editor published in the local News Corp and (what was then) Fairfax newspapers between 2009 and 2013, and found that the “science accuracy” was much worse in the News Corp papers. Professor David Karoly worked on that research when he was at the University of Melbourne, but is now at the CSIRO’s earth systems and climate change hub (part of the national environmental science program). He told Crikey that they found a greater bias in both opinion pieces and letters to the editor in News Corp papers, and especially in The Australian.

“The opinion pieces in The Australian newspaper, which are often not submitted but sought, ended up being significantly more biased than the letters to the editor, and this is still the case,” he said. “It’s clear that the News Corp newspapers are trying to influence an audience, but particularly when it’s in commissioned opinion pieces.”

The research also found that The Australian was more biased than its tabloid stablemates, the Herald Sun and The Daily Telegraph.

“They try to strengthen a view around climate change not being an issue, or the major costs perceived to occur with moving away from coal-fired power stations and to renewable energy,” he said. “They’re essentially spruiking a Rupert Murdoch view that they do want to undercut or destroy the credibility of the science that’s been accepted in international assessments around the world and the IPCC assessment but it doesn’t fit their owner’s ideology.”

I’m a long term shareholder of ‘the West Australian,’ starting long before it was taken over by Kerry Stokes, and then merged with his Seven Media.

But I refuse to read it, ever since it became ‘Murdoch-light’ (and not even that), and started publishing Andrew Bolt.

It’s a completely denialist publication. Before I stopped buying it, I’d noticed that there was no global warming letter to the editor that wasn’t silly enough not to be published.

Its global warming denialism is pervasive throughout the publication.

It is not only Bolt, Devine, McCrann and Blair that rail against anthropogenic global warming. Chris Kenny is as vehement as Bolt in his denial of AGW, and Judith Sloan regularly downplays the phenomenon and regularly displays her strong anti-renewable stance. Kevin Donnelly, in criticising the student protests, trotted out the usual denialist memes. Even the letters to the editor are carefully selected to reinforce the denialism.

The deliberate ommission of letters and on-line commentary by those disputing the false proclamations of these columnists is a major factor in the attempts to influence opinion.
‘Peer pressure’ has significant influence and by denying the publication of information contrary to that being falsely promulgated, the “voice of public opinion” is being deliberately distorted.

I find it interesting that when I happen to pick up a Murdoch owned paper left lying around at work (I haven’t bought one in years) I find the same names with pro LNP letters always appearing in the News LTD letter section day after day.
The good news is that Rupert’s newspapers are dying a slow well deserved death and because of their “pay for view” pay walls, soon those rusted on LNP supporters will be the only ones reading their own drivel.

Yes, but would they use that “70”% share of our hard-copy/newspaper news market and SKY (with that “News Corp Australia Editorial Professional Conduct Policy” self-regulation) of theirs, those looney elements of 10 and other various/radio shock-jock dependants (for ‘all the news they need’) to bend reality out of shape – just to suit the agenda of Rupert Murdoch – who sits on the Advisory Board of Genie Oil & Gas along with with Dick Cheney?

…… Though I will admit I’ll never forget one afternoon’s drive to a local shopping centre back in May 2015.
The day that local rag ran a story/furphy on “how well the GBR was really going : as opposed to how greenies were bullshitting about the state it was in” : “according to Britta Shaffelke (from the Aust; Institute of Marine Science)”. ABC radio on in the car and listening to Britta Shaffelke as she rang the ABC to complain about how she’d been misrepresented and quoted out of context, to suit the Curry or Maul agenda/version of “news”.

Re Limited News m.o. :-
On Friday and it’s Saturday aftermath we saw one more nadir in society and the politics of “xenophobic intolerance” ideology.
(“Nothing to do with those for whom they give succour”?)
The one thing that kept the Tarrant cohort from being labelled “TERRORIST” was their Judeo-Christian “culture” : just as the one thing that keeps “terrorists” being labelled “MADMAN/MURDERER/KILLER” is their Muslim culture.
So the question for the likes of Morrison, Dutton, Hanson, Anning, Bernardi, Blot and their ilk from the likes of Limited News/SKY – feeding their “dependants” – is “What are WE doing to curb the likes of our Tarrants – to the satisfaction of the Muslim community?”

We should stop calling people who deny the scientific consensus and science of Global Warming “Sceptics”. Scepticism is the correct approach to be taken by scientists as they gather evidence on theories and propositions. These people should be called what they are, “deniers”.

With all his stacked $Billions, this will be his epitath, his outstanding contribution to the denial of climate science on three continents.
‘Murdoch’ will become a curse, salient warning to a reduced humanity!
Dickens could not have done him justice!

Wel, it would be impossible to do the ,mudorc an injustice – he has been the source of so much evil in the world, wars, plitical change, deceit & deception.
None more richly deserves his own special Circle of Hell.

Though it might be argued that if Murdoch did not exist someone else would fill that vacuum …it’s not a strong argument, on ambition and global reach. He has a particularly malign talent and needy personality..
Murdoch has managed to gather a cast of desperates and utter cranks to promote his world view. It’s the world view of the ‘silly old bugger’, which his billions magically makes credible to needy trolls like Blair and Bolt.
Fox, Sky and the papers…what a legacy of nasty mediocrity.