Will Australia ultimately intervene in West Papua like it did in Timor-Leste? Or will the government turn a blind eye in favour of its recent free trade deal with Indonesia?

Last week, Trade Minister Simon Birmingham was in Jakarta to sign Australia’s long-awaited free trade deal with Indonesia. Already our most important security ally in the region, Indonesia is now set to become a trade partner of comparable significance. But throughout the eight months of negotiations, violence has escalated in the Indonesian province of West Papua, with allegations surfacing that the Indonesian National Armed Forces (aka Tentara Nasional Indonesia or TNI) deployed a chemical weapon, white phosphorous, on civilians.

In response to the worsening situation, which includes cases of torture, UN human rights experts have issued an unprecedented declaration condemning a “culture of impunity” surrounding human rights abuses in the region. More than ever, the conflict appears to be mirroring another from our recent past: the Indonesian genocide in Timor-Leste.

Late last year, The Saturday Paper published images of Papuan villagers with severe chemical burns consistent with the use of white phosphorous, in the remote highland region of Ndgua. Tensions in the area were already high, due the continual presence of the TNI, who accompany Indonesian road workers constructing the Trans Papuan railway. Violence broke out after locals took part in a flag raising ceremony in support of independence (flying the Morning Star flag is an arrestable offence), which left 31 Indonesian workers dead.

TNI forces responded with a three-pronged retaliation — artillery, ground troops and an air-bombing campaign, which included the alleged deployment of white phosphorous bombs. White phosphorous is listed as an incendiary weapon in the UN’s Convention on Certain Conventional Weapons, which prohibits its use in areas with a high concentration of civilians.

The Indonesian government has officially denied the allegations, calling them “propaganda” and “fake news”. When asked for comment, a spokesperson for Australia’s Minister for Foreign Affairs and Trade Marise Payne responded that “our officials have also engaged with a wide range of non-government contacts in Indonesia, including those with first-hand experience of the situation in Nduga, and none have provided any information that would corroborate the original allegation”.

But Ronny Kareni, a spokesperson for the Free West Papua Campaign, cast doubt on this claim, explaining to Crikey that no Australian officials have even been allowed into the area where the alleged chemical attack took place. 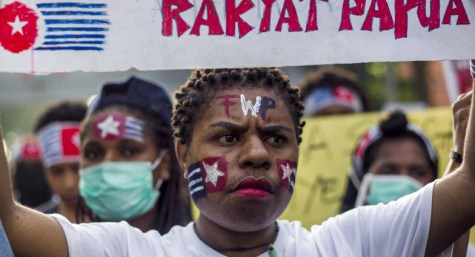 “There are two survivors from the bombing, but unfortunately because of security and limitations to access in the region, it has made it very difficult for them to get access to medical supplies, let alone the medical support to obtain scientific findings to prove the alleged use of chemical weapons,” said Kareni. “Local and provincial governments have been restricted to enter the area, so if they want to enter they will have to be followed by Indonesian security forces, which is the military and the police.”

This is not the first time that the analogy has been made, but the similarities between the current conflict in West Papua and that in Timor-Leste are increasingly difficult to deny. It is now known that Indonesia utilised napalm in its fight against Timorese independence, with secret documents released in 2015 revealing that the Australian government was aware of this during the conflict.

Like the profits it obtained from resource-rich Timor-Leste, Indonesia makes billions of dollars from gold and copper in West Papua (mining company Freeport McMoRan is Indonesia’s biggest taxpayer). And just like Timor-Leste, there is overwhelming support for an independence referendum in West Papua — a recent petition delivered to the UN in support of such a vote contains the signatures of 1.8 million West Papuans.

While the 25-year war over Timor-Leste is now widely considered a genocide, the ongoing conflict in West Papua doesn’t appear to yet register as a concern to either side of Australian Parliament. Both the government and the opposition’s official responses emphasise a recognition of Indonesia’s territorial sovereignty over West Papua, and reiterate Australia’s commitment to the Lombok Treaty. The treaty, signed in 2006, had Australia and Indonesia pledge not to support “in any manner” any activities that threaten the “stability, sovereignty or territorial activity” of the other.

The violence in West Papua is arguably even bloodier than it was in Timor-Leste — since Indonesian occupation began in 1963, it is estimated that 500,000 civilians have been killed. Occupation started what has become a sharp decline in the indigenous Papuan population, which Kareni attributes to many seeking refuge in neighbouring Papua New Guinea, and the continuing legacy of a transmigration policy, which created Indonesian settlements in West Papua to alleviate overpopulation on islands like Java. Making up 96% of the West Papuan population in 1971, Indigenous Papuans made up only 48% in 2016, and if this rate continues, the rate will fall to 29% by 2020.

As Australia commits to the free trade deal, strengthening our relationship with Indonesia into the future, West Papuans continue to ask what it will take for the Australian government to intervene, like they eventually did in Timor-Leste. “Part of this trade deal that they are discussing will focus on livestock,” said Kareni. “But what about human lives?”

What do you make of the situation in West Papua? Do you think Australia needs to do more? Write to boss@crikey.com.au.

The colonisation of WP should not have happened, it did. Of course Australia should do more, but we won’t. No way will we do what we were eventually forced to do in TL.

Should have said re colonisation. First the Dutch and then the Indonesians. Another tragic legacy of WW2.

There is no way we’re going to antagonise the Indonesians by overtly supporting West Papuan independence. Immediately following such a move, the boats would start flowing our way again, as Jakarta withdrew all co-operation, and it would be all downhill from there.

So sad. So un-Australian. The pursuit of ‘free’ trade deals at the expense of humanity and human rights says everything about the priorities of our government and that of most others.

That these deals, and that DFAT, ASIS and the DSO all act within an iron curtain of secrecy makes all this even grubbier and damning.

Be careful what you wish for. Independence for WP makes me think of how it’s working out in PNG. Support WP independence fighters and turn Freeport into another Bougainville. I’ve copped flak here a couple of years ago for suggesting we should be harsher on the dubious East Timor govt.

Self determination is great in principle but it doesn’t necessarily mean good outcomes for the locals. Why would we commit to a ground war in a tropical mountainous country again ?

The Freeport mine is too important to bother about little things like Truth & Justice getting in the Amerikan Way of BigBi$ – Freeport McMoRan is as yankee as they come.
BTW, how likely is it that 1.8M WP can sign their name on a petition?