Emma Alberici learns some Twitter maths, George Christensen is back in the media, and Q&A wants some of that YouTube cred.

We’d happily have Channel Nine not pay for our trips. In a classic Media Watch gotcha aired last night, the ABC program exposed Nine’s 60 Minutes for bankrolling expenses for “Joe Donor”, the subject of a highly-critical story about how many women he’d donated sperm to around the world. Media Watch said it had seen bank transfer statements, and also quoted “Joe” himself, saying Nine had paid for motels, car hire and sent wire transfers in exchange for filming part of his 40-day trip. But, curiously, in its statement to the program, Nine denied any payment to the man at all to fund his trip. Its spokesman was a little less emphatic when Ms Tips asked for clarification this morning: “There were expenses and production costs incurred in the normal course of filming. We maintain that 60 Minutes did not seek to pay his fare or fund his trip.”

Ms Tips understands that those “expenses and productions costs” included a “per diem” requested by Joe of almost $500 a day, as well as the motel that the program filmed in for four days. We’re sure the MEAA would be happy to furnish 60 Minutes with its code of conduct which states journalists should “ensure disclosure of any direct or indirect payment made for interviews or information”.

Alber-over-rici.  We’ve previously chronicled the Twitter phenomenon of being “ratioed”. This occurs when a post is deemed offensive or stupid enough that the ratio of comments (usually of abuse and critique) greatly exceeds the number of retweets or likes.  On Monday, senior ABC journo Emma Alberici gave us a gold standard example. Alberici blithely went source hunting with the tweet “I want to hear your stories about living on the minimum wage. Have you had to dip in to your savings?”. A high-profile journo combined with a tone-deaf assumption that people earning minimum wage could just “dip into” savings (which the minimum wage doesn’t allow one to accrue)? Well it was as febrile a combination as the “dry winds from the east and the parched grass awaiting a spark“. Big weapon energy. After years of being being a reliable provocateur LNP member for Dawson, George Christensen, quietened down a little just before and after the “vile and defamatory smear” that emerged around him and his travels to Asia late last year. We here in the Crikey office found ourselves oddly nostalgic for his empty, weapon brandishing provocations, particularly as his colleagues shake themselves to rubble all around him. So we were delighted when a tipster sent us through a picture from The Morning Bulletin, a local paper in Central Queensland. It would appear that, while he’s a little quieter, Christensen has not changed. Here he is, brandishing a machete for no discernible reason, flanked by fellow his QLD MPs — a smiling Ken O’Dowd and Michelle Landry, who looks, well, about as happy as any woman could be in the Nationals right now. Will the election bring Christensen back into the public eye?

Q&A destroys joke. Last week, ABC’s Q&A played host to Jordan B. Peterson, the reactionary Canadian academic and patron saint of disaffected masculinity. The show’s producers proceeded to then feature a special video question from alt-right provocateur Milo Yiannopoulos. After the show had aired, and Peterson had graced viewers with his idiosyncratic brand of pseudo-psychology, tough love and “Fascist mysticism”, the ABC uploaded a video to the show’s website and their YouTube channels titled “Jordan Peterson destroys Q&A”. Seasoned Peterson-watchers will know that such a title is typical for videos uploaded by his fan boys. YouTube is riddled with videos where “Jordan Peterson destroys” everything from feminism (the most common target of his destructive power), Islam, regressive BBC reporters, leftist interviewers and SJWs (social justice warriors). A solid joke, but we’d be interested to see if the irony lands with Peterson’s fans. 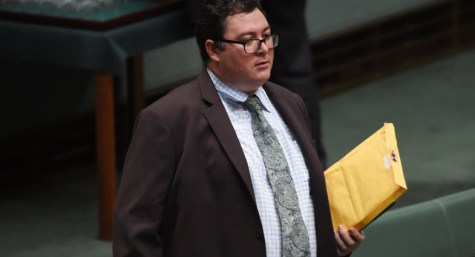 Alberici …. being Alberici as far as I can see.

“A solid joke, but we’d be interested to see if the irony lands with Peterson’s fans.”

Judging from the YouTube comments, they not only took it entirely seriously but also discussed panellist Terri Butler with the sensitivity towards women for which Peterson’s fans are well known.

Van Badham was also excoriated by posters in SMH as was the reviewer who had the gall to mock St Jordan. Blood sport.

From that photo it looks more like ‘Manila George’ has a paddle in his hands, rather than a machete. Might have bought it on one of his SE Asian holidays.

That’s not a machete; that’s a cane knife.

I’m not sure what it’s got to do with lowering power prices.
Maybe he’s promoting biogas from cane trash?

I wish writers including Crikey authors and editors remembered that ‘host’ is a verb as well as a noun. Instead of the circumlocutous: ‘ABC’s Q&A played host to Jordan B. Peterson’ prefer ‘ABC’s Q&A hosted Jordan B Peterson’.