With everyone continuing to follow their talking points, we're taking a deep dive into a shallow pool.

On paper it had all the makings of an explosive session. Four of the biggest female names in Australian politics on stage at the biggest women-centred festival in the country to tell all, woman to woman, about the inner workings of the corridors of the highest power.

On the day, however, it felt like more of the same. What were the odds that we were going to get much more than self-promotion and promotion of party politics from working politicians?

Not that host Jacqueline Maley didn’t try. After introducing the All About Women panel — Greens Senator Sarah Hanson-Young, Labor’s Linda Burney, former Liberal foreign minister and deputy party leader Julia Bishop, and former Liberal MP and now “sensible centrist” Julia Banks (this, apparently, was representative of the “entire political spectrum”) — Maley did her best to grill Julie “I’m not a feminist” Bishop, particularly about sexism in the government. The endeavour proved fruitless as Bishop put her 20 years of politics to good use, skilfully deflecting question after question.

Bishop did admit Parliament House is essentially a theatre, and that the performative and adversarial nature of parliament meant politicians were “judged by [their] ability to be a warrior”. But she seemed to forget this when, not 20 minutes later, Maley asked her if she now felt differently about the infamous Gillard misogyny speech. Bishop declared the speech a “cynical” performance and use of politics for personal gain. It was jarring to hear her continue to excoriate Gillard, after she’d only just admitted she took part in this political theatre of the absurd (“I was no angel, I played my role”).

But then, no one else on the panel was willing to shed any dirt on their own party — that is, apart from Liberal Party defector Julia “thank God I’ve left” Banks, now safely ensconced in the comfort of her new perch in the “sensible centre” (as she kept reminding us).

Sarah Hanson-Young and Linda Burney got off rather easy by not being questioned about some of the shocking scandals plaguing both of their parties. Burney stressed that she has “always felt listened to and supported” as an Aboriginal woman in the Labor Party. Her experience is her experience, but the leaking of harassment allegations against Emma Husar seems to not gel with this image of a respectful Labor Party culture. 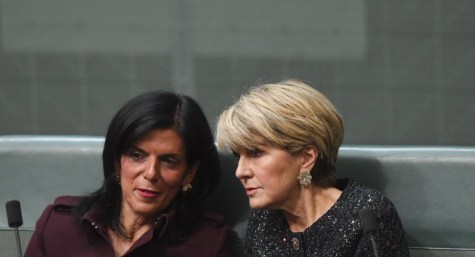 The spotlight, though, was firmly on the ruling Liberal Party and whether it was fundamentally incompatible to be a conservative and a feminist — not that either Bishop or Banks ever referred to themselves as such. What we were left with was a curious mix of defending party politics itself, while complaining about the collective men with whom the women have shared power for so long.

Hanson-Young, whose book En Garde delves into her experiences of bullying and sexism in politics, claimed it has gotten worse: “it was in the corridors and rooms; now it’s in the Chamber”. Julie Bishop chimed in with the only real goss she would offer: that in cabinet meetings, as the only woman, she’d make a suggestion and “there would be silence” only for a man to repeat what she said.

This is hardly a revelation. When I hear stories like this from white women I wonder, yet again, if they’ve ever stopped to think about how often they do this very thing to women of colour.

The overall impression was that of a simultaneous agitation against the lot of women in power, and a collaboration with it. The nods to empowerment feminism — Hanson-Young encouraged women to “just do it; if you want to do anything, you can, you just have to do it” — betray a superficial approach to equity. Despite the work of so many feminists of colour, people continue this perception of women’s lives only through the lens of gender and ignore the material conditions of our lives which make it impossible for many of us to “just do it”.

This marks something of a step backwards both for All About Women and for our understanding of feminism. The strength of these festivals lies in the willingness of participants to honestly and unflinchingly expose where and how women are being undermined. But then, maybe having a political journalist host the session made it seem too much like just another media opportunity.

Perhaps this was particularly jarring for me as I’d raced to the concert hall after providing a last-minute fill-in on the “Feminism in the Arab World” panel. In that 60 minutes, my co-panellists and I discussed academic feminism; the role of Arab hip-hop in grassroots activism; colonial history and its legacies; the Arabisation of North Africa; the impossibility of an Arab identity in an area so diverse there are 22 countries and multiple dialects; the construction of virtuous white womanhood and how it remains the barometer by which all other women are judged and found lacking; the Tunisian revolution that Tunisians refer to not as an Arab Spring but as the Revolution of Dignity; anti-blackness; how sectarianism shapes and does not shape politics and society across the region; and the reductive way the West still tends to view progress almost exclusively through the electoral process, and how this does not account for the role of civil society.

I admit that to go from that complex conversation to 75 minutes of what can basically be distilled to “we all need to treat each other better, and more women in parliament will be better for everyone” felt a bit like taking a deep dive into a shallow pool. This is standard feminist-lite fare available all over the internet for free, so I’m not sure whether the audience needed to pay $30 for the privilege.

What do you think of the recent discussion around women in politics? Send your comments to boss@crikey.com.au.

Cox to Gillard: take gender distractions off the menu

What would you expect from a panel of careerist politicians- politics.

I express suprise that if this sort of bullying, harassment and discrimination (whether gender-based or any other attribute) happened in any other workplace there would be outrage and demands for action. Yet all we get are poor cliched excuses like “the need for rigorous debate” and “politics is a tough game” from those rationalising this behaviour and silence from these panellists when it happens in our Parliaments. How come?

Do you really think there would be outrage and demands for action, Sally?

A hell of a lot of low paid workers experience bullying, harassment and discrimination and a hell of a lot of them are female. The majority, in fact. The industries with the highest female participation rates still tend to be the lowest paid and it’s been happening for decades – certainly all five of mine – and I haven’t heard much public outrage about it. I certainly haven’t heard many calls for action. Compared to the outcry, support and calls for public donations to her legal fund poor, put-upon Ms Hansen-Young enjoyed the silence is deafening.

Seems to me liberal feminism is a little like Animal Farm : all women are equal, but some women are more equal than others.

Ruby, please do a review of Dr Anne Summers National Press Club address last week for a much better take on things. An excellent read also is a piece in John Menadue’s blog Pearls and Irritations today about Greta Thunberg. These women at opposite ends of the age spectrum tell us more about our world and women’s role than these politicos ever can.

It is widely accepted that when Banks took that swipe at welfare dependants (complaining about having to get by on the likes of her government’s Newstart $40/day, by saying it was plenty – enough for her) she was slagging off/abusing women on welfare as well? Isn’t it?

Ovaries do not a feminist make.

If you’re in the ‘sensible centre’, you’re a brain-dead turkey. If you own five houses and
think you can easily live on the dole, you’re a lying , gratuitously nasty parasite.
Otherwise known as a corporate lawyer with the egotistical drive to become a politician
in the liberal party.

“.. in cabinet meetings, as the only woman, she’d make a suggestion and “there would be silence” only for a man to repeat what she said.”

I took up the role of EEO officer with an educational organisation in 1982. In ready circulation at that time was a cartoon of a meeting with a committee chair thanking the sole woman present and suggesting he’d wait now for one of the men to put forward that idea.

So the LP is 30+ years behind everyone else. That’d be about right.