Not for the first time, radio stations have to decide what to do with the music of someone at the centre of sexual misconduct allegations.

Australia’s least offensive radio station, Smooth FM, has removed Michael Jackson from its playlists, following some of its international counterparts’ response to a new documentary about child molestation allegations against the deceased pop star.

Leaving Neverland is a two-part documentary that includes interviews with two men who say they were molested by Jackson as children at his Neverland ranch. Oprah Winfrey has since interviewed the alleged victims too.

The easy-listening station that features mild broadcasters including Mel Doyle, David Campbell and Richard Wilkins is alone among Australian FM stations to remove Jackson from its playlists. In a statement to Crikey, Nova Entertainment Group program director Paul Jackson said:

The decisions we make about the music we play on any of our stations is dependent on the relevance to the audience and the current context. In light of what is happening at the moment, Smooth FM in not currently playing any Michael Jackson songs.

It follows the lead of NZME and MediaWorks in New Zealand. The networks, that own the majority of commercial music stations in the country, have both taken Jackson’s songs off rotation, as has the national broadcaster Radio New Zealand.

We aren’t deciding whether Michael Jackson is guilty of pedophilia or not. We’re just merely trying to make sure that our radio stations are going to play the music that people want to hear.

Aside from Nova Entertainment, which owns Smooth FM, the two other major commercial radio networks in Australia aren’t taking Jackson off the airwaves. Southern Cross Austereo told Crikey that, while it took allegations of this nature “very seriously”, the claims “remain allegations and therefore we currently intend to continue to play his music on occasion”.

A spokesperson for Australian Radio Network acknowledged the international decisions to remove Jackson from their playlists following the documentary:

At this stage, ARN stations with music formats that play Michael Jackson won’t be removing his music however, as always, we will continue to regularly review our playlists based on what audiences want to hear.

In the UK, the BBC has denied earlier reports it was also banning Jackson from its stations, and wedding DJs in the US are also grappling with the question of whether to keep a dancefloor staple on their playlists.

Jackson’s music is just the latest example of radio networks dealing with what to do with popular music when the artists behind them commit, or are accused of committing, crimes. A documentary program about R. Kelly and his subsequent police charges has prompted a “mute R. Kelly” movement, and allegations published by The New York Times about sexual misconduct by singer-songwriter Ryan Adams also led to his catalogue getting pulled from radio station playlists.

Leaving Neverland screened last week in the US on HBO, and in Australia it will show on Network Ten tomorrow evening (and on its streaming service 10Play). 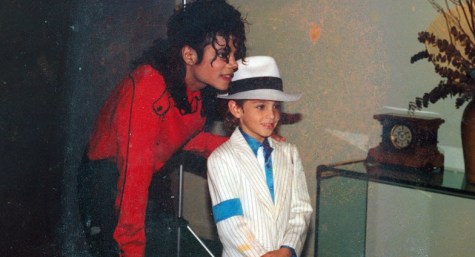 How many bites at the cherry do these guys want ? The best known of the two was a star witness at MJ’s trial saying he wasn’t molested. Now he’s fronting up years later in this flick saying he was. Although the family may complain they’ll lose radio royalties I can’t really sympathize as it wasn’t their work and they’ve no doubt raked it in up to now. However MJ is conveniently no longer here to defend his name. Why not dredge it up while he was alive ?

Oh for the good ol’ daze and the likes of Jerry Lee Lewis?

I think that he was either denied an Oz visa or expelled when his kissin’cuzzin marriage became known in the 50s.

‘Those were the daze my friend…..’

MJ the rockspider.. not moonwalking .. scuttling..

Da Vinci was a bit dodgy sexually, according to Church authorities at the the time as well as the Mike Angel bloke – if ‘David’ isn’t proof he was a pedo what is?