The latest scare campaign against industry super funds is the fantasy that trade unions will start calling the shots for big business.

The Australian industrial superannuation system is one of the great models of industrial relations cooperation in the world. In 38 industry super funds, every day, union-nominated and employer-nominated directors put their day jobs aside and meet to oversee the business of making money for their members. In doing so, they’ve managed to significantly out-perform the market-based super fund model run by the big banks — while investing in asset classes like major infrastructure projects that politicians want supported but that the retail funds won’t touch.

As Crikey has detailed over and over and over, instead of being celebrated, this success has been pilloried as a colossal example of union corruption. As far as we can work out, Crikey is the only outlet other than industry fund-owned New Daily that even mentions industry super funds are actually jointly run by employers and unions. It’s as if the rest of the media have a weird filter that edits out employer groups from the story of industry super.

Funnily enough, however, from a historical perspective, industry super hasn’t been about some insidious victory for unions; instead, it represents a process by which trade unions have become fully fledged participants in the capitalist system that they’re intended to protect workers from. Unions now have every bit as much of an interest in the strong performance of the economy, of the major companies in which they’re invested and major asset classes as the rest of the shareholding class. Trade unions have been co-opted into the very heart of Australian capitalism. That incessant conservative demand of the 1980s, that trade unions abandon militancy and work with business for the good of the economy, has been achieved in a way that would have been unthinkable then.

But that hasn’t changed the business/Liberal/commentariat view that unions are implacably evil.

Now that the retail super funds that were championed by the Liberals, big business and the commentariat have been discredited, the latest hysteria about union funds is that they represent a sinister threat to business via their activism. There’s been a surge of coverage in the Fin and the Oz in recent days about the sinister threat of Greg Combet-led funds imposing their will on big companies.

Like the campaign run by Liberal Party loyalist Andrew Bragg designed to portray industry funds as a giant slush fund for unions, the fiction of rampant union activism barely manages straw man status. Article after article comes back to just one instance of union “activism”, BHP being pressured over the jobs of Australian seafarers. The AFR’s John Kehoe had to shoehorn in Glencore’s decision to cap coal production into his piece. It’s true that AustralianSuper is part of the Climate Action 100+ initiative that put pressure on Glencore — but so are such raving socialists as the Church of England, HSBC Global Asset Management and Canadian insurance giant Manulife. Terrifying.

But let’s consider an alternate reality in which unions really did pressure the boards of major corporations, via their industry fund shareholdings, to behave more ethically in recent years. What might have happened? What nightmare scenarios might have occurred? Perhaps the major banks would have been encouraged to proactively address their systemic and cultural flaws rather than wait for a royal commission, saving themselves hundreds of millions of dollars. Maybe major companies would have been more likely to negotiate higher wage rises, halting years of wage stagnation that have undermined economic growth. Maybe big mining companies might have proactively addressed the problem of tailings dams killing scores of people. Maybe energy companies might have been less likely to exploit their market power so aggressively that even the Liberal Party came after them with the big stick of forced divestment.

And, curiously, the AFR and The Australian have no issue with private investors throwing their weight around — even if it results in mammoth wealth destruction. Too bad if you were a small investor in Ten, for example, when Lachlan Murdoch, James Packer, Gina Rinehart and Bruce Gordon waded in and presided over the trashing of the network. And it took a royal commission into the banks before those newspapers wondered if retail super fund trustees were acting in the interests of members, when it was obvious for years that there were systemic problems in them.  Apparently, industry super funds are to be held to a far higher standard than business.

The fantasy of union thugs lumbering into boardrooms and ordering businesses around via industry super funds itself relies on another fantasy — that Australia’s big business boards have been covering themselves in glory in recent years. That’s the lie at the heart of the latest attempt to demonise unions. 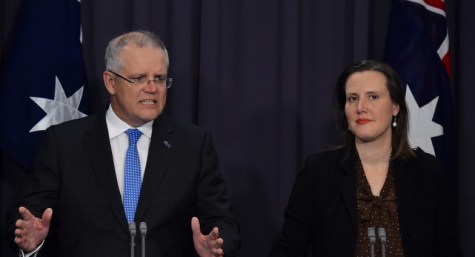 In the end, it was the Liberals who killed retail super

Combet’s a good operator but he has the same lack of public charisma as Shorten. But Albo is a totally different kettle of fish.

There’s nothing wrong with Combet but Shorten deserves to lead

Excellent article, right on the money, I read those articles in the AFR and Oz yesterday with incredulity. by every measure Industry super funds run by both unions and industry have outperformed constantly the retail funds. I am all for good corporate governance, but I am also all for not fixing what isn’t broken. as pointed out there are many investment funds that are taking an ethical approach to investment and the returns for those funds have been good.

Once upon a time Oz had a ‘news media’ – now, in it’s place, we have Screaming Lord Stutch and Sun King opinionista trolls paid to masquerade as media hacks.

The big corporates know that if unions did use their powers for good, by way of industry fund influence, they would have to smarten up their act. This is why they must always be projected as deviant, despite excellent and ethical performance within the very capitalist structure they are meant to be at odds with. They haven’t been co-opted, they are actually demonstrating that capitalism, not neoliberalism, can be deployed in a way that is fair and responsible. Wait what…?

And another thing – is the Parliamentary Superannuation Scheme, both pre- and post 2004, not a superbly well-funded industry superannuation fund? Is it not managed by the Remuneration Tribunal – a group of three people all appointed by this government?

As I was a Commonwealth public servant I belonged to the old ComSuper Scheme and after I left Commonwealth employment I preserved my accumulations and later joined UniSuper. I had no choice in these decisions. They seem to me to be identical in practice and effect – both then limited to employees within the respective industries. While I was a member of UniSuper I knew individuals, including highly respected professors and union members, who were on the board.

Now retired I draw a pension from both and these are paid in identical ways.

The Fin and the Oz must be in rapid decline if this is their standard position.