Welfare spending has gone up under the Coalition

The claims that the Liberals are engaged in an attack on welfare aren't actually backed up by the numbers.

If the Howard government failed to make a dent in welfare spending or its incidence in Australia, what’s happened since 2008? The overall level of spending on welfare, health and education can only be a very rough guide to the extent to which governments have cut or increased welfare spending but, based on budget data of actual spending over the last decade, it’s impossible to conclude the Coalition has cut welfare spending since 2008.

Let’s look at the numbers.

In 2005-06, spending classified as social security and welfare in the budget papers was $86.2 billion. This year it’s forecast to be $174.7 billion and rise to more than $182 billion next year (we’ll get updated numbers in the coming budget, of course).

Liberal governments fail to live up to anti-welfare reputation

In 2012-13, Labor’s last full year in office, social welfare spending was 34.5% of all spending, so it has gone up under the Coalition since then. Similarly, health spending as a proportion of all expenditure has increased (albeit not by much) since the Labor years.

Education spending has fallen slightly as a proportion — but the comparison is fraught given it took a couple of years for Labor’s highly successful Building the Education Revolution (BER) stimulus package to be rolled out, with a corresponding impact on the budget numbers.

But as this graph detailing spending adjusted for inflation since 2013 shows, the Coalition has either maintained real levels of spending from 2012-13 or increased them for welfare, health and education.

You can see both the BER and stimulus handout spikes in that graph, but Labor’s time in office was otherwise noteworthy for its efforts — relentlessly opposed by the Coalition at the time — to curb middle class welfare by cutting family payments to middle-income earners.

That, presumably, is not the sort of thing left-wingers have in mind when they complain about neoliberal cuts to welfare. But this is an important reason why the level of welfare spending to overall spending has fallen since the Howard years.

Once the stimulus payments were out of the way, Labor cut family payments from nearly 13% of all expenditure under John Howard to around 9%; they’re now forecast to be 7.3% next year after family payments were held steady since 2016-17. Otherwise, there’s little evidence that Joe Hockey’s “age of entitlement is over” was ever really delivered, at least in overall spending terms. 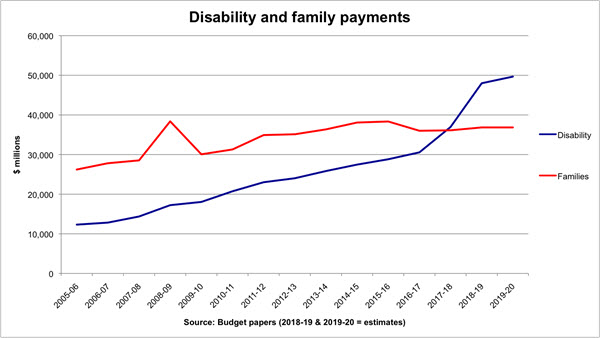 And that recent pause in family payment increases has been part of the transition to the National Disability Insurance Scheme. Disability payments (which include the Disability Support Pension) will be nearly $48 billion this year, compared to $29 billion in 2015-16. Disability payments have increased from 7% of all spending then to nearly 10% now and will continue to rise.

Critics may say that NDIS was a Labor initiative, which is true, but the Coalition under Tony Abbott immediately supported it and even — shockingly for an opposition characterised by relentless negativity — backed an income tax rise to pay for it.

That hasn’t stopped the Coalition since then falsely claiming Labor didn’t pay for the NDIS — Finance officials are on record as confirming it was — but nonetheless it’s contradictory to claim a Liberal (and neoliberal) assault on welfare while tens of billions of additional funding are going into the NDIS.

Aged pension spending has also increased slightly under the Coalition, rising from just over 13% of spending in 2012-13 to a forecast of around 13.9% next year. And unemployment benefits have fallen in real terms, reflecting the sustained strong jobs growth achieved by the Turnbull government.

The Coalition is hardly spotless on welfare: the robodebt scandal was a disgrace to both minister Alan Tudge and his bureaucrats; the cashless welfare card infantilises recipients and has no evidentiary basis; its Work For the Dole scheme is unsafe and pointless (funny how the death of a Work For the Dole participant elicited none of the furious reaction from the media and the Coalition that deaths under Labor’s Home Insulation Program did).

But in macro terms, once again the claims that the Liberals are engaged in any attack on welfare — neoliberal or otherwise — don’t stack up.

22 thoughts on “Welfare spending has gone up under the Coalition”