A love letter to Invercargill and cities in decline

There is a strange pleasure in visiting places like Invercargill, forlorn cities stuck decades in the past. But nothing can stay unchanged forever.

One cold day, 25 years ago, I stepped off a train in the very south of South Island, New Zealand, and into the 1950s. The train had come all the way down the coast from Christchurch, people getting off at Timaru, Dunedin and other points, and looking at those of us remaining on with a mixture of quizzicalness and pity. When we reached the terminus, no more than half a dozen got off, into the maw of a bizarre concrete modernist, vaguely Jugendstil station.

The wind ripped. I had a backpack on. The others, hardy white folk in tweed and short haircuts, gaped at me. We live here, they seemed to say. Why are you here?

Invercargill! Why was I here indeed? The city is on the very southern tip of New Zealand. It is the most southerly English-speaking city in the world (only a couple of Chilean cities beat it out for the world title), with a population of about fifty thousand, and that was enough to make it worth going to. Once there, it was clear that this was effectively a re-enactment of Brigadoon, a place emerging from the mist to greet a solitary tourist.

For more than a century, the place had been a prosperous city, a centre of meat export and frozen fish production. That had all declined decades ago, and nothing had replaced it. The place was away from the new glacier tourist industry; most people only encountered it on the way through to the nature reserve of Stewart Island. That seemed fine with Invercargill, which, unremarkable, unobserved, persisted.

Out of the station, the main street had a row of 20 or so three- and four-storey Victorian terraced buildings, paint peeling, as yet unrestored, which would have been demolished decades earlier elsewhere. I slipped into the nearest cafe, which was an austere affair with a tray race — a tray race! Metal bars you slide your tray along, as you select plates of four point sandwiches — and ancient waitresses in coiffed paper hats. The stodge food was of a lost Anglo-Celtic era: mousetrap (basically bubble ‘n’ squeak on toast), four brands of meat pie, Dominion Assortment boiled lollies, and the queen of them all, banoffee pie, which, I would find, amounted to the city’s national dish.

Afterwards, I checked into the sole hotel — a 10-storey late-deco/modernist place, right out of Edward Hopper, called the Kelvin, built in the late ’50s, and towering over the city — and stayed for three days. The wind whipped the bare streets, the rain came in the morning and stayed, the sun never broke through the grey skies. Who knew heaven was due south?

But nothing has been left unchanged in the past two decades, and so it was with trepidation that, just after Christmas, I stepped off the bus and had a look at the place again (the train has long-since been discontinued). The weather was still reliably grey — through the first half of January, it never broke past 20 degrees, and it rained every day but four — and the main street had persisted. The terraces had been repainted, but you can’t have everything.

In the interim, the city had suffered the same boring beautification that gripped every municipality in the ’90s and 2000s: widened footpaths (for who?), brick replacing asphalt in a mini-mall area, pointless public sculpture here and there, but that could all be ignored. The single Starbucks that had arrived tended to emphasise the exotic nature of everything else. Go for the weather, stay for the general air of decline.

The aim was to avoid the January heat and get some serious work done, and, for relief, wander melancholically among streets of undisturbed Victoriana/Edwardiana. Boarded-up shops, derelict warehouses. This is “forlorn tourism”, holidaying in places from which active life has vanished, but which has yet to lean on its retro/historic quality assets. Being has left, and our ghastly post-historical existence has not yet arrived. It’s morbid symptoms on a package tour, and it repays tedium with an air of disconsolate disturbance from dawn to dark.

Can Bali top that?

The Grand Hotel, a terraced pile on the main street, now a residence hotel, with its all wood-panelled foyer, its perpetually deserted front desk, its manual earthquake evacuation chart, its ballroom, locked up for decades. Painted advertisements, which date from the ’40s with three-digit phone numbers, lie undisturbed on the side of shops. The city’s preserved water tower, at the end of a street that goes forever, so omnipresent as to seem like the product of a dream. Buried behind warehouses, the remains of David Strang’s coffee mills, which emerged like Laocoon from imminent demolition a decade or so ago. (Strang invented instant coffee here in the 1890s using fish preservation processes. For decades, until a US process superseded it, instant coffee was known as Invercargill coffee).

This was all going splendidly for a week or so. I had attained a state of wholly undefined and indefinable loss of something I had never myself had, as to enter a quasi-mystical state. Being itself was emerging from behind existence, in each iron terrace dripping with rain. And then underneath one such, on the front of a long-vacated shop, a notice: application to demolish.

I didn’t read much more. There was, in one of the other shops, a display suite. The damn city was about to pull down its central city block and replace it with a black glass shopping mall, apartments, a new cinema. Grand Victorian buildings were going, a tiled arcade, the works. The proposed new design looked like every suburban mall you’ve been avoiding for the past 10 years.

They’d got me. That’s the trouble with backwardness; it’s backward. Those ghastly “centrals” that bigger cities had put in decades ago and were now desperate to break up, Invercargill was just getting around to doing. The news was so disturbing I fled to Bluff, the small port south even of Invercargill. There they were planning to demolish their largest Victorian building, a triple-fronted Victorian hotel, and put in what looked like the world’s most RSL-y RSL.

“An urban heritage consultant was hired last year,” Jen, who ran Bluff’s funky cafe, told me as she gave me a lift back.* “He said they should keep the hotel and make it a boutique upmarket place, and keep most of the city centre, and infill new stuff with the old. So they sacked him.”

Well, their city, not mine. I was engaged in some sort of Club Med, a holiday in other people’s misery, pursuit of the existentially uncanny. All the same, I felt nauseous for about three days straight, and eventually assuaged it only by, at 7am one morning, putting up a whole series of Cultural Revolution-style big sticker posters denouncing municipal vandalism on shopfronts around the town. Ah, history goes, that’s what it does. Still, traces persist. The proto-hipster Zoo cafe (to be demolished) sells a banana-caramel milkshake, does a roaring trade. Banoffee living on, the taste of the past.

*The Bluff bus service had been discontinued, but no notices had been removed; in Invercargill, the museum had been closed because the roof was structurally unsound, and the town’s construction budget had been spent shoring up the earthquake-damaged rugby stadium; forlornness is everywhere. 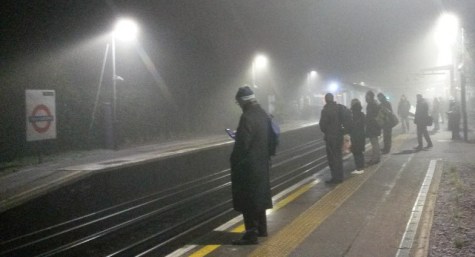 Rundle: far from Starbucks, and on the way to nowhere

Sigh. Memories of mid-70s Invercargill. Some buggers are making a motza out of these “developments”. But I agree, why does everywhere have to look exactly the boring bloody same!?

Did you really have to leave the country after your effort yesterday?

Nice one Guy. If you want to see a city in NZ that has made something interesting out of its old buildings try Oamaru with its steampunk museum. There is even an annual steampunk festival.

I will admit there are parts of New Zealand where it is hard to distinguish steampunk from business as usual, but it is a niche tourism destination that works for them and preserves their history.

You’ve reminded me that Oamaru has Janet Frame’s house and some rare kind of penguins, too, which I unkindly omitted from my other comment.

Best bit of ‘travel’ writing I’ve read for many years, Guy.
I’ve never been further south than Dunedin. Last time we made it to Oamaru; after arriving to find the only person in the windy-rainy main street shopping centre, on a mid-summer day like those described by Guy, was a man in shorts and heavy parka (he looked very ‘army surplus’) studying a map, we retreated to the motel and decided not to venture any further south.

There’s a NZ cult movie called “Goodbye Pork Pie” (much loved by the country’s dope smokers, and remade recently as simply “Pork Pie”) in which a bunch of misfits race across the country in a Mini pursued by cops, the media and a bunch of crims. Both versions well worth seeking out, though probably unfindable in Oz… The character’s determined aim is to “Go all the way to Invergarill!”

It’s a joke only Kiwis will get, because nobody ever wants to go to Invergargill! No one… Except Guy Rundle, apparently…

Thank you Guy. Enjoyed the colourful (an sadly accurate) description of my birthplace (actually Bluff)… Makes me want to go back too…

I think The Quiet Earth is the classic New Zealand end of the world story. Elsewhere it was a good science fiction movie.

Not seeing people may be the new normal. In the current Australian summer heat you can drive through country towns and see no one on the streets anywhere – just the occasional car with air con at full blast.

“All the way to Invercargill.”
“Nothing half-arsed!”

Thanks, Guy and Teddy for that reminder.