Crikey had a front-row seat at this week's Senate inquiry into the widely criticised pre-employment program. Noticeably, there were a few seats spare...

Even without having to compete with the revelations regarding George Pell that are dominating Australian media, you suspect this would have been a quiet story. As Crikey arrives at the Senate inquiry into the ParentsNext pre-employment program for single parents, The Guardian‘s Luke Henriques-Gomes is already there, assiduously typing away. His Twitter feed (along with Per Capita’s Abigail Lewis’) operates as a mini Hansard for the event and he represents exactly 100% of the other reporters there — although Crikey alumnus Sally Whyte is also listening in for The Canberra Times.

Nominally a pre-employment program designed to engage single parents with their community, ParentsNext requires people to attend compulsory activities every week — say, story time or playgroup. If they fail to do this (or just report it within a strict time-frame) their parenting payment is suspended.

I say single parents, but this is a program aimed at women. Particularly poor women. Particularly poor Indigenous women. Ninety-five per cent of participants are single women, and more than 16,000 (roughly one in five) parents on the program had their payments suspended within the first six months. The suspension rate for Indigenous participants is more than one in four.

The program has been severely criticised as pointless, demeaning and intrusive, and it’s not hard to see why. Providers are essentially able to design an activity plan as they see fit and suspend payments at will. If there is a dispute, the arbiter is the provider. This leads to mothers forced into signing privacy waivers, having their medical records accessed without permission, and having to message their provider pictures of their day, proving they are attending whatever compulsory activity they’ve been set. Often ParentsNext is the only source of income the parent has and poverty is, if not already a reality, a trapdoor beneath everything they do. The power imbalance is staggering.

Every single witness at the inquiry, even the job providers who are a little more mild in their criticism, says that the “targeted compliance framework” that allows this to happen should be removed from the program. Well, that is until a swathe of public servants from the Departments of Human Services, Social Services and Jobs and Small Business turn up to defend it.

One wonders what it must be like for a public servant, preparing to defend a policy that literally every other witness has said doesn’t work. They rattle off a long opening statement (Greens Senator Rachel Siewert, the committee chair, eventually cuts them off). The are confronted with the above examples of poor provider behaviour, and provide the bureaucrat block: “there is nothing in the guidelines that permits this”.

Siewert counters, wide-eyed with incredulity, “but this is what’s happening…”

She forms a strong double act with Labor’s Murray Watt. You can tell by the murmurs in the crowd, they ask the kinds of questions the advocates want asked. But Watt is also a bit, well, Labor about the whole thing when it comes down to it. At the press conference — when campaign figurehead Ella Buckland hands over the 34,000-strong petition asking for the policy to be made voluntary — Watt is asked whether Labor will scrap or change the policy. He will say only that there “is a lot of concerning evidence being presented” and that he’s not the shadow minister concerned.

That kind of equivocation is, thankfully, absent from his questions.

The Coalition representative, Senator Lucy Gichuhi, is present via teleconference; she doesn’t ask a single question until the job providers turn up after lunch. The “no” that crackles from the speakers every time she’s asked if she has anything to add is so clipped and uninflected it might as well be a staffer with a tape recorder.

At one point, Henriques-Gomes turns to me and wryly compares the conduct on display here to the hysteria around the franking credits inquiry. Indeed it’s worth comparing the two issues more broadly; franking credits get days upon days of coverage, front pages, photos of “concerned citizens” peering out from their seaside properties and campaign ads. Two journos are at this inquiry. Attendees at this inquiry firmly and seriously point to the sexism and counter-productive nature of this policy. People at the franking credits inquiry shout from the back and declare they might as well be euthanised because they might stop receiving a rebate on tax they don’t pay. One gets serious airtime, a national debate, while no one turns up — the ABC, Age and all the commercial networks all pass — to the other.

In another context, Australian Council of Social Service CEO Cassandra Goldie — a passionate, caffeinated figure who delivers long sentences on a single breath while rocking slowly back and forth — touches on a possible reason for this: the misogyny and moralising around single mothers. How else to explain the difference in punitive measures between this and say, policies around aged care?

Goldie concludes her evidence by reflecting on the wider conversation about re-entering the workforce and the surveillance and control (control is a word that also comes up a lot) exerted on vulnerable groups like single mothers. “There is an assumption that single mothers don’t know themselves, and what they need. That’s not true — it’s just minister after minister in this area hasn’t asked them.”

There is a “yes!” that emanates from the crowd and reverberates around the small conference room. It’s the loudest interjection we get on a day more often characterised by a sigh and a quiet, disbelieving shake of the head. 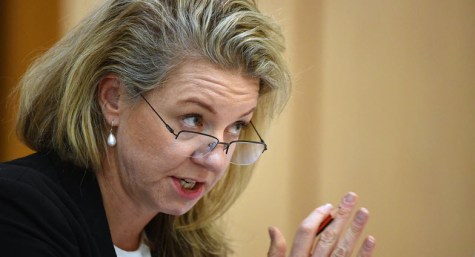 Senate asks why we sterilise women, kids with disability 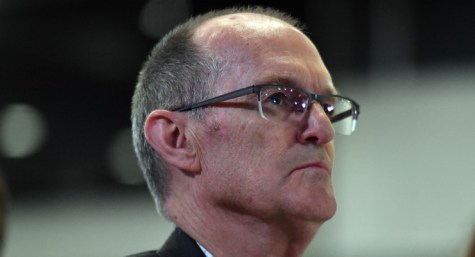 David Marr’s comment on Monday on the Pell conviction is suitable here too. It’s all about sex. The LNP, just like the Cardinal Marr was describing, opposed gay rights, changes to the law on homosexuality, SSM, abortion, IVF for single women, stem cell treatment. You name it, they want the last word against it. That they would be down on single mothers is another example. They hate sick refugees too and would deny them treatment.

Thanks for this report. Pity the senate enquiry will receive so little coverage. The unspeakable inhumanity of the present government needs wider publicity.

As Watt showed, don’t expect anything from ‘Labor’ – they will continue this, just like robodebt.

What point were you trying to make here Desmond? That single parents should not receive government assistance? Or that they should be punished for needing it?

There may be a misogynistic component, but the rich have always had a robust sense of entitlement, which they then deplore when they see it in anyone less privileged than themselves. For example, the rich criticised the welfare state (remember that?) because its offer of cradle-to-the-grave security for everybody was unaffordable, induced indolence, etc. But the rich themselves, with their inherited wealth, have always believed in their own cradle-to-the-grave security – they just have a problem extending it to others.

Given the author acknowledges most of us have never heard of this program, a brief explanation of what it is, it’s aims and eligibility should have started the piece. I looked it up but the dept description was the usual public service vague sunshine and lollipops.

It probably started out as a good idea on paper until the Minister and cronies tweaked it with compulsoriness, no input capacity from participants and a solid chunk of the funding going to providers. A bit like offshore detention.

I agree this system sounds a bit like offshore detenetion, but I don’t think any “idea” like this is ever good. To me, this particular one has only ever been just another way of demeaning and demonising the vulnerable in our society. Imagine this:

You’re a single parent, most likely a woman, living in a small town in, let’s say, the Farrer electorate, a region with 22% unemployment. You already have to contend with likely being “breached” if you to comply with tasks set you by your “job service provider”. Now, you’re stuck in this “Parents Next” rubbish, without any choice in the matter – a programme with penalties for non-compliance with conditions the “job service provider” imposes on you because of your inclusion in the system. Now, on Wednesday you’ve been told to take your child/children to a “story day” at your local library on Friday. There’s problems with this – the “local” library is 75 kilometres away, there’s no public transport, your ancient car only has a quarter of a tank of petrol, and you’ve no ready cash.

What do you do? Appealing to the job service provider will get you nowhere. Do you go and hope you don’t run out of fuel either going or coming? Do you go, and hope that you first, get back home, and second, not have to meet some other more or less difficult task involving travel in the next week or two? Do you not go and risk losing your payment for an undisclosed period?

Hobson’s choice, isn’t it? As I said, another disgusting, deliberately cruel policy aimed at the poor and vulnerable. It’s to be hoped that Labor cancels all these crappy systems, gets rid of the profiteering private Job service providers, and reintroduces a fair and equitable method of dealing with unemployed people. I’m not holding my breath, though.

Thank you Crikey – I had no idea that this cruelty was even a thing.

What is wrong with this government? I can’t even…

Same here FD – I’m quite staggered after reading this piece.

It’s basically Mutual Obligation plus misogyny with added child abuse – cutting payments to poor parents, brilliant way to improve their ability to provide for their children.
But a perfect way to appeal to the rabid right.