The Abbott/Turnbull/Morrison government has had a number of high-profile policy failures. It’s hard to go past climate policy as its most spectacular stuff-up, but superannuation surely has a strong case as well, if the latest data from the Australian Prudential Regulation Authority is anything to go by.

Along the way, it had the Business Council, the Financial Services Council, financial planning organisations and significant sections of the media backing it. Three of the four ministers who had carriage of the superannuation portfolio have been former bank executives.

After six years, however, the extent of the Coalition’s failure is clear. Industry super funds have enjoyed massive growth in funds while retail funds are in decline and self-managed super funds — championed by sections of the media against industry super funds as the growing stench from banking scandals became overpowering — have flatlined. 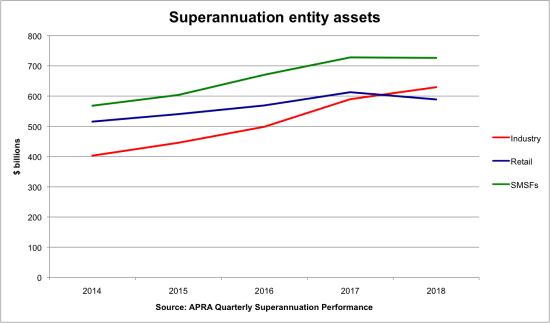 In that context, 2018 was merely an acceleration of existing trends. In 2017, retail funds had grown their assets by less than 8% compared to over 18% for industry funds, which had overtaken the former in overall size of assets. That was before the royal commission revealed the full extent of the rorts indulged in by the big banks and AMP. That saw retail funds shrink by nearly 4% while industry funds grew by 6.7% across 2018.

If the coming election spells the end of the current government, its legacy in superannuation will be one of its most notable failures. The sector it set out to protect has crashed and burned while the sector it sought to wreck has prospered; all of the major reforms the Coalition sought to implement have been defeated.

Indeed, in committing to implement nearly all of the royal commission recommendations, the government finds itself completing unfinished business from the FOFA era that it desperately fought in the days of Julia Gillard. It’s one thing to fail in your own objectives, quite another to reluctantly sign on to completing the work of your opponents.

Part ideology, part irrational malice, the Liberals’ hatred of industry super (even as some of them put their super in industry funds to take advantage of their better performance) was one of the defining characteristics of this period of Coalition government. Perhaps 2018 will mark its end and a reluctant acknowledgement by the Liberals that industry funds are here to stay and perform better than for-profit funds.

That might mean Australia can get on with a superannuation and retirement incomes policy driven by evidence and logic, no matter which side is in power. Is that too much to hope?

Do you think the government will finally change its tune on superannuation? Let us know at [email protected]. Please include your full name if you would like to be considered for publication.

In the end, it was the Liberals who killed retail super

Climate is failure by deliberate omission and super by ideology. The NBN on the other hand is a failure that is almost as great for Australia’s future but was destroyed because of the deliberate petty mindedness and viciousness of Turnbull and Abbott.

Actually, I guess if we want to make a list it will be simply too long to go into.

The hatred for trade unions eclipses all other influences. It is intensely pathological.

Paradoxa – Irrational hatred of trade unions is the only dogma on which the “broad church” can agree.

More publicity should be give to the fact that Industry Super funds are run by boards with equal numbers of employer and employee member and are open to all, not just union members.

I was in two industry funds – the old ComSuper and UniSuper – and, now retired, drawn a pension from both.

The thing that makes me laugh is that MPs are all members of the most high paying industry superannuation fund of all – only people in their industry can join, it is monitored by some of their own (not labelled unionists of course, but the role and effects are the same), and it does very well by them. One difference is considerable though – no waiting to reach an ever-rising age to claim benefits.

Being accidentally born a Pom, I enjoyed many years ‘Bonfire Night’s’ where effigies of Guy Fawkes were burned every fifth of November. I’m feeling the need to start a new tradition in Australia. September 18th was the date that Abbott took up the position of Prime Minister, so that date seems suitable for me (Unless it’s a Total Fire Ban Day.)