Scott Morrison had a chance to secure some credibility on climate action yesterday, but opted for the same facile talking points we've been hearing for years.

It’s tough being a Liberal when the electorate — as it does periodically — decides climate action is necessary and politicians opposed to it should be turfed out.

This past summer, which has seen an array of new heat records and devastating fires and floods, has once again made climate inaction unacceptable to voters. Climate denialists have to keep their heads down; moderates have to subtly suggest they’d like to go further, and those who believe in nothing will utter whatever talking points sound best.

Take Dave Sharma, the Liberal candidate from central casting (and — more fatally — the North Shore) who lost Wentworth to Kerryn Phelps on climate change and asylum seekers. Sharma is going around again against Phelps and clearly feels the need to more strongly signal his climate change credentials than last time by urging greater, though suitably vague, action. He also suggests there’s “plenty of blame to go around on all sides” for Australia’s dismal record on climate policy.

Well, actually, Dave, there isn’t — the blame extends strictly to the Liberals and the Nationals, who went to the 2007 election promising the world’s most comprehensive emissions trading scheme and then refused to support Labor’s much more limited scheme, who twice dumped Malcolm Turnbull over climate policy, who opposed and lied systematically about the impacts of the Gillard government’s carbon pricing scheme, and who rejected any bipartisanship on climate despite Labor abandoning carbon pricing and agreeing to support each, successively worse, scheme the Turnbull government came up with.

Or there’s Scott Morrison. Morrison leads a denialist government. Whether he’s personally a denialist isn’t clear. More likely, he doesn’t believe in anything much. Thus his backyard barbie-level insights into climate change on 7.30 last night. Pressed by Leigh Sales on how, exactly, climate change would affect the Australian economy, Morrison offered that climate “impacts everything from our farming operations, our agricultural sector right across our marine environment so obviously the climate has an enormous impact on life in Australia as we know it as it has for hundreds of years indeed tens of thousands of years.”

Such forensic analysis from the country’s leader doesn’t augur well for proper climate policy — thus the reheating of the wretched Abbott-era Direct Inaction policy. Morrison was keen to shift from Sales’ focus on climate impacts onto the fact that Australia provides only a tiny proportion of the world’s emissions and that we were meeting our own self-identified targets so, hey, what could he do?

The repeated insistence that Australia is responsible for only 1.3% of global emissions is one of the great furphies of the climate debate here. Not because it’s not true, but because it’s irrelevant: we might be a bit player in terms of total emissions (we’re champions in per capita emissions, of course) but we’re also the developed economy most at risk from climate change. No other developed economy faces such serious impacts on its economy, key industries and infrastructure as Australia — from reduced agricultural output, greater disease, more severe and more frequent weather events and greater exposure to rising sea levels.

What Morrison could have said was “we may only be 1.3% of global emissions but we have a vested interest in ensuring that other countries, and especially big polluters, accelerate their efforts to reduce emissions. And we can’t do that while failing to reduce our own emissions. How can we say to China and India that they should take major steps to reduce emissions in their crucial economic sectors when we won’t do the same, despite being much wealthier? We have to lead on climate action, because the stakes for Australia — and our regional neighbours — are too high.”

If Morrison had said that as he took Direct Action out of the policy microwave and offered it up to voters again (with the bizarre, apparently unthinking support of Nine’s newspaper journalists), he might have appeared credible and practical, a leader willing to accept reality no matter how inconvenient. One prepared to put aside a decade of denialism from his party and engage pragmatically with a key challenge facing Australia.

As it stands, he looks like a desperate politician trailing in the polls with less than three months til an election. 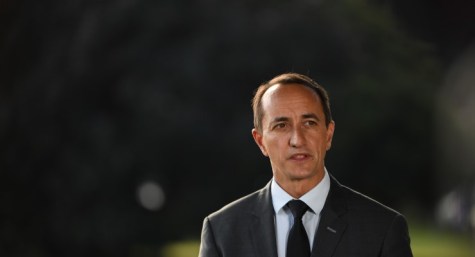 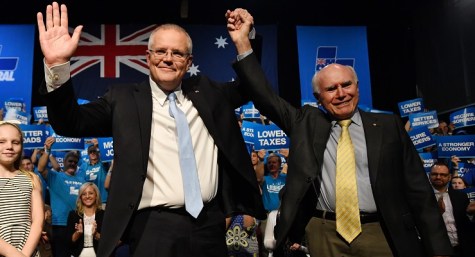 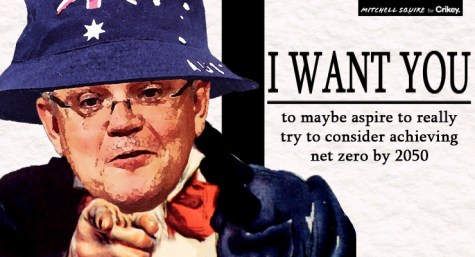 “Morrison was allowed to shift from Sales’ focus on climate impacts ……”?

I thought it was not Leigh Sales best interview. She let Morrison get away with too much. She could have pushed him on bringing the lump of coal in parliament, if he believed CO2 and humanity was causing climate change, or even the demise of the NEG (before it started).

Leigh Sales does not have it within . . . a perfect fit for our new, cautious, compliant and independent ABC?

Imagine Shorten being able to set the Sales agenda?

Everyone in the ABC is walking on eggshells. No mention in todays ABC about the border patrol boats not patrolling to save petrol. ABC has been butchered. It looks more and more like a duck walking……

Sales has always been extremely soft on Liberal & National MP’s…..especially when compared to her more biting style when interviewing Labor or Greens MP’s.

Well, Denmark has only a quarter of our population, but its commitment to non-carbon generation makes it a moral leader on the world stage. We hide in a corner, hoping no one will notice our squalid rate of emissions. Instead, we could be seen to be taking a hit, and taking steps to survive it.

The other point that he won’t acknowledge is that along with importing deflation we are also exporting our carbon footprint.

Maybe so, Bernard, but we account for only 0.33% of the global population, so our per-capita emissions are amongst the worst in the world. How do we expect China & India to reduce their per capita emissions when ours remain so much higher than theirs? Yet they already are doing more about emissions than Australia is!

In this context numbers mean nothing: a head prefect sets a standard for the other 99.9% of the school’s enrolment. One person’s exemplary behaviour has a crucial impact on the majority.

It’s not just the heat but the debilitating effect of heat and high humidity. We used to laugh about the English complaining about the heat of a summer’s day reaching 25C. But what wasn’t appreciated was the accompanying humidity was often over 60%.

As someone said recently the tropical climate we used to associate with North Queensland is moving south.

Together with the stingers and the crocs….Sales has a woeful track record holding these climate criminals to account.

As at Lake Woebegone, “we are all above average”.