‘Concerned citizens’: the rise of political plants in an election year

Political parties have a constant feed of "concerned citizens" to put in news stories. Let's meet a few of the more recent examples.

With a federal election campaign coming up, you can be sure to hear a lot of “concerned citizens” turning up in media and campaign ads, expressing their worry about a political party’s policy in a sometimes suspiciously specific and on-message way.

Sometimes their interest in politics is not as new as they might imply. Over the next few months, keep an eye out for more concerned citizens (with unannounced affiliations) like this:

Bill Shorten’s retirement tax is hopeless for us people living in South Australia and a lot of people, my friends included, we rely on our stocks and shares and the dividends we get from them. Bill Shorten hasn’t thought about the people who have worked hard … and now we’re not quite sure what’s going to happen in the future. That’s one of the reasons why I’ll be voting for the federal Liberal government at this election.

Jim Bonner is a 72-year-old South Coast retiree who is absolutely fuming about Labor’s policy regarding franking credits and self funded retirees. He announced in a recent Georgina Downer campaign video that they had lost his vote.

The plant: The ad failed to mention what Bonner is retired from. He worked as a press secretary for Liberal prime minister Malcolm Fraser. And Liberal South Australian premier Dean Brown. And Liberal defence minister Ian McLachlan. And he was a staffer for Liberal cabinet minister Simon Birmingham. Oh, and a media liaison for multiple federal Coalition election campaigns…

The penalty rates cut was, seemingly a slam dunk for the Labor Party. The Fair Work Commission, stacked with Liberal appointments was cutting the entitlements of Australia’s most vulnerable workers and the Liberal Party had nothing to say about it. A young man, Trent Hunter, standing beside opposition leader Bill Shorten at a press conference in February 2017 summed it all up perfectly.

The plant: While Trent Hunter did indeed work in retail (Coles in Western Sydney) his extracurricular activities are also perhaps relevant: he was a delegate for mammoth Labor party donors the Shop Distributive and Allied Employees Association, and a Labor Party campaign volunteer who had worked closely with Labor MP Emma Husar. Apart from that — and this is pretty ironic given the Shoppies reputation for cosy deals that screw over their members — the deal he was under actually insulated him from the penalty rate cuts, and he wasn’t likely to lose a cent.

Former communications consultant Jon Gaul, 80, was among those at the gathering, where he told the hearing the [franking] policy was a ‘death tax’ and ‘blatant, unfair, deliberately targeted discrimination’ that would prevent him from leaving any inheritance for his three children.

The real luck is when a media outlet does the equivocating on one’s behalf. Gaul was portrayed in an February article in The Australian as a kind of unofficial spokesperson for his local community of seaside-dwelling self-funded retirees who were to be unduly affected by Labor’s proposed policy on franking credits.

The plant: Well, it might be worth looking at an updated version of the story which adds “for the Liberal party and local branch president” after the description of Gaul as a former communications consultant. It also clarifies that he has been president of the Eden-Merimbula Liberal Party branch for three years. The Australian Financial Review also sympathetically reported Gaul’s comments to his local RSL, but mentioned his Liberal party connections.

In the lead up to the federal election in 2016, a Liberal Party campaign ad featuring Andrew Macrae, a “tradie” with suspiciously flash jewellery, questionable safety processes and a pronounced sympathy for the big banks (which has aged particularly well) attracted ridicule and the hashtag #faketradie.

The plant: As it turns out, Macrae was able to produce a NSW government contractor licence as evidence he was a genuine tradesman. He apparently owned a business called Teamwork Maintenance, although we can’t help but note the business did not have a website, advertising or social media profile. So maybe it should have been #ambiguoustradie? 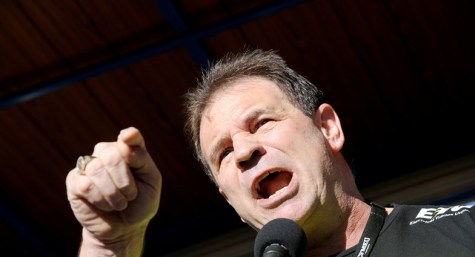 Whatever the question, the answer is John Setka 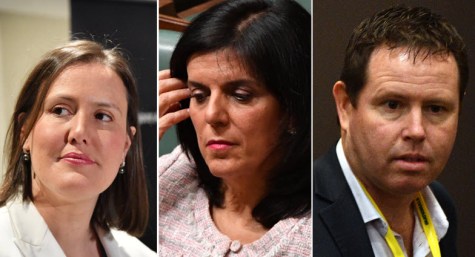 Where the bloody hell are these advertising morons who think their subterfuge will never be found out – and how much are they paid to be so stupid?

The difference with what the shoppies did is that at least they got a pay rise in exchange for the penalty rates. The (un) Fair Work Commission decision was unilateral and involved no pay rise.

As a shareholder in AFI(aus foundation investment), I received a short survey email form today to give feedback on the terrible ALP policy to cut the dividend imputation associated tax give away thats been in operation for years. They wanted ammo to fight the ALP policy. They asked if I’d like my feedback on their skewed questions to be published if “they needed it”. I agreed, but I doubt they will be in touch given my bolshi responses. Although I think Nine’s MAFS producers could massage it into line.

labors franking credits policy is basically right but it does impact too harshly on the lower income retirees and still grossly benefits the wealthy who continue to receive franking credits off their taxable income, it should at least be grandfathered or a minimum income cutoff level, most of these small income retirees have done no more than follow the legislation as advised by their advisers, but are now being portayed as greedy wealthy bludgers sucking off the taxpayers teats when in fact they actually save the tax payer hundreds of thousands of dollars over their retirement lives by not claiming the aged pension, most of these have salary sacrificed and forgone luxuries during the working lives to accumulate a reasonable superannuation holding , it should be remembered that these politicians crying about tax savings enjoy a much greater income on their retirement , paid for by us , and their fat super is mostly tax and travel cost free, and then they can get cushy job post politics as a payoff for for favours to corporate australia while sitting as politicians on fat salaries, also, in most European countries you are allowed to take your super and still get the pension as you have paid for it all thru your working lives, as have these small income retirees, it doesn`t take much to get the envy rage going in Australia, most of these baying blood hounds will sooner or later be faced with retirement and then watch their attitudes change, Australia, whining one day and whinging the next, and just for the record, I`m a lifelong labor member/voter/worker and not a member of the hard hearted, mean spirited conservative class, but I like a fair go for all, including those hard working forward thinking small income self funded retirees and stuff the rich bastards and a pox on all the whining bastards out there too.

Why don’t journalists just ask how much super (non taxable) that these people have, and don’t they realise that it is actually supposed for be for you to support you in retirement, not the income derived from it.