The Emissions Reduction Fund was used by Tony Abbott as a scam to channel pork to Coalition supporters while pretending it would address climate change. Now Scott Morrison faces the same problem, so he's doing the same thing.

With the Morrison government dusting off its “Emissions Reduction Fund” to address the political problem of being climate denialists when the electorate wants action on climate change, it’s worth examining the history of the program, and how some things never change.

When what became the government’s Emissions Reductions Fund was first put together by Greg Hunt on the back of an envelope over the summer of 2009-10, it had two purposes. First was to pretend that Tony “climate science is crap” Abbott, who had recently replaced Malcolm Turnbull as Liberal leader, had a climate action policy. The second was to pump taxpayer money into the pockets of Coalition supporters. Not for nothing did “Direct Action” have a strong focus on carbon sequestration by farmers — or “soil magic” as Lenore Taylor brilliantly dubbed it.

The first goal proved difficult. Abbott was an unapologetic denialist and once elected in 2013 he set about trying to wreck the Australian renewable energy industry, sending investment off a cliff. And the ERF — in its original form to be worth $10 billion over a decade — had been slashed repeatedly by hardheads within the Coalition, and was eventually reduced to $2.5 billion.

The fund had no supporter in the government other than Hunt. Climate denialists within the government thought it was a waste of time; climate action supporters knew it was worthless as an emissions policy. And both knew that it was a waste of money. Peter Costello’s 2007 intergenerational report had directly addressed policies like Direct Action, saying it would involve “significant fiscal costs” that “can rise quite significantly, imposing a substantial tax burden on today’s, and future, generations.”

Even industry groups normally aligned with the Coalition derided it. When the Abbott government signed up to a Paris Agreement target of 26-28% of 2005 emissions, the Australian Industry Group warned it would cost between $100-250 billion (yes, billion) to reach the goal via the ERF.

Meantime, the funding was pumping hundreds of millions to Coalition supporters. As per “soil magic”, nearly two-thirds of the funding flowed into “vegetation management projects” run by farmers. More frequently these would be large pastoral and agribusiness companies, a new mini-industry of ticket-clipping carbon consultancies that would organise and do the paperwork for ERF grants for smaller companies and farmers.

Verification of carbon sequestration is difficult for such projects, and given (as a review by the government itself acknowledged) all the carbon abatement gains could be wiped out by drought, flood or bushfire, useless as a source of long-term emissions reduction.

Big business was lured in by the prospect of, in effect, free money, often for projects they would have internally funded anyway. Fortescue Metals, Wesfarmers, AGL, mining companies, Qantas, Woolworths and Woodside all received grants under what was essentially greenwashed corporate welfare.

So absurdly generous are the ERF guidelines, a company part-owned by Coalition donor and fossil fuel energy enthusiast Trevor St Baker recently applied for a grant to upgrade the Vales Point coal-fired power plant, the life of which his company is proposing to extend an extra twenty years. And state and local governments also received grants, in effect cost-shifting what they should have been funding themselves onto the Commonwealth.

As predicted, the ERF did nothing to curb Australia’s emissions, which reversed course and began rising again after the ERF “replaced” Labor’s carbon pricing scheme in 2014. The Climate Institute calculated that, with more than 80% of the ERF budget allocated, the scheme would cover less than one-eighth of the emissions reductions needed to reach the Abbott-era (and hopelessly inadequate) 26-28% targets, assuming that none of the likely sequestration problems with “soil magic” eventuated.

Now, nine years later, Scott Morrison is facing the same problem Tony Abbott faced in 2010: voters think he doesn’t believe in climate change, and he needs a fig-leaf policy to pretend he does.

So, the ERF is being dusted off again — though the name is sufficiently discredited that it will be rebadged yet again — with extra funding, though just $2 billion, not the tens of billions needed to make it faintly plausible, and even widened to be more generous to industry and farmers. Gullible journalists at Nine have fallen for it — maybe they should read the intergenerational reports of their company chair; it’s less clear that the electorate will. 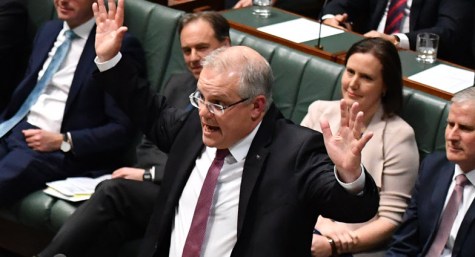 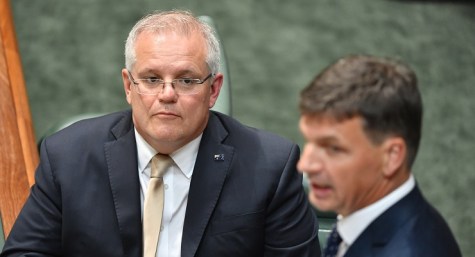 Supposedly private equity &/or market driven corporations that receive tax payer funded grants or are allocated funds for a specific purposes need to either repay the amount or yield a obvious and tangible return to the tax payer either $$ or beneficial activity.

A capitalist venture should not be tax payer funded; or should be nationalized to a comparative degree if it is not viable without government funds; or just die off as a unnecessary parasitic entity

This is the same Morrison who waved a piece of coal around in Parliament whiles his mates guffawed at his wit.

Soil magic has been extended to government magic…what a shambles of a policy portfolio to take to an election, spruiked by a cohort of proven liars..!!
And some journos (Keane among them), plus around 32% of our voting population, still think they are worth another go..!!

Carbon sequestration is just good farm management. To be dishing out tax free grants for doing what should have been happening anyway is not ‘soil magic’, it’s a fraud on taxpayers. At the very least it should be referred to the Auditor General to establish whether this money is just more pork

In any discussion on decarbonisation, we must not be distracted by any nonsense about “carbon sequestration”. It never has been possible on the scale required, and it never will be. It is wishful thinking at best, and always will be a red herring.