While everyone’s worrying about "fake news" on the "unregulated" internet, the world’s new global screen content behemoth is pumping it out to untold millions of homes.

One of the unintended effects of the vast growth of Netflix is the sheer demand it has for new product. This is increasingly being sourced from non-US places, and so viewers are exposed to worldviews other than their own, and how the rest of the world thinks. And that is sometimes an amazing and horrifying experience.

Take Trotsky, an eight-part series currently on offer, detailing the rise and fall of the co-leader of the October revolution. Produced in Russia, it is a fervently anti-Bolshevik picture of the era, with even neocon journal Foreign Affairs noting that it reduced Lenin and others to caricatures. When Foreign Affairs thinks that…

Trotsky, who had a genuine wit*, gets the best lines. But what makes the show important is its portrayal of how the October revolution came about, and the central place it gives the shadowy figure of Alexander Parvus-Helphand, the most significant historical figure you’ve never heard of — a Marxist who became a millionaire, and then a German imperial agent. According to Trotsky, the entire October revolution was pretty much his creation, with Trotsky as a willing puppet.

I’ve banged on about Parvus once or twice before here, and in just about every other forum. Here’s the short version: he was a Russian Jewish radical, a trained economist, who became a leading theorist in German Marxism around 1900, a leader in the 1905 Russian revolution, developing the theory of “war and permanent revolution”, which would become the basis of the October revolution. 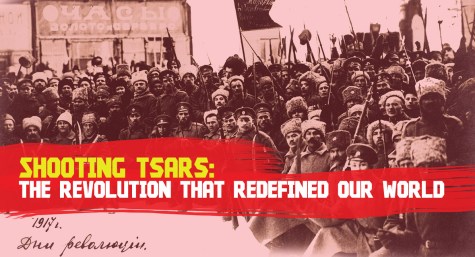 Shooting tsars: the revolution that redefined our world

Convinced that the movement needed money as much as people — and drummed out of the German party on account of women, wine and financial impropriety — he went to Istanbul, became rich off military supply commissions, and a friend of the German ambassador. When World War I broke out, he got his master plan put into action — millions of German marks funneled to a Russian network, which fomented strikes and destabilised the Tsar.

Publicly, Lenin repudiated him; privately, his key Bolshevik lieutenant was part of Parvus’ operation. He organised Lenin’s sealed train, funneled money to the Bolsheviks through a dodgy Danish think tank/export company, and helped pitch the Ottoman empire into the war (knowing it would destroy the sultanate). When the Bolsheviks abandoned Lenin’s brainless “socialism in six months” policy**, and adopted a transitional state capitalist economy in 1921, it was along the lines Parvus had suggested in 1908 (based on Australia, and the Harvester judgment). Oh and he organised a battleship hijack during the Dardanelles campaign. He died in 1924 in his mansion on Peacock Island in Berlin, having been expelled from Switzerland due to rumours of masked orgies. He’s kinda my hero.

He was thus a man of huge influence (much of it unknown, or denied by official history) in fomenting and facilitating the revolution that defined the 20th century. What he wasn’t was a sinister Jewish puppet master with the revolutionaries on strings, for obscure Judaic purposes, as the Trotsky series appears to suggest (his money did fund Trotsky’s revolutionary newspaper Nashe Slovo, through a Romanian double agent named Rakovsky — better than Le Carre, isn’t it? — which left Trotsky unaware of the source).

Parvus was famous in the West until 1939 — the Nazis loved pointing to a Jewish Bolshevik millionaire who fanned the flames of war — and disappeared thereafter, as official post-war US anti-communism distanced itself from its pre-war anti-Semitism.

But he’s never stopped being notorious in Russia because of, well, anti-Semitism. The notion that the country was pitched into the horrors of Stalinism by a Jewish plot has allowed Russian nationalists to hold the belief that loyal Russians were tricked into deposing their ancient order. Parvus is a hugely visible figure on the Russian right after a series of books wildly overstating his influence became bestsellers in the 2000s.

The paranoid take on Parvus dovetails nicely with the east European appetite for extreme conspiracy — back to the Crusades, if possible, if not Ancient Egypt — of which anti-Semitism is just one element. It also assuages a deep bitterness that several generations of life have been stolen from them (the neoliberal disaster of the ’90s as much as Stalinism) by making it the product of nameable, satanic figures, rather than the chaos of history.

So the appearance of such a show on Netflix does two things: first it makes clear just how resurgent old-school Christian conservative anti-Semitism is in Europe, and on the right more generally. But secondly, it transmits that by featuring such a farrago of history as part of its global output.

While everyone’s worrying about “fake news” on the “unregulated” internet, the world’s new global screen content behemoth is pumping it out to untold millions of homes for an obvious reason: it needs thousands of hours of watchable TV. Those of us who know the history can snicker at the “Boris Badenov” portrayals; for millions of others it will simply add to what is the most bizarre phenomenon of our time: the resurgence of a literal-minded anti-Semitism as an unremarkable feature of right-wing politics, and the culture more generally, from Belarus to Wollongong.

*to be fair, Lenin was no slouch. When asked what punishment, for anti-leadership organising, the party should visit on extreme-left communist, and famously fractious, couple Alexandra Kollontai and her toyboy lover Dybenko, Lenin suggested they be forced to live together.

**”The trouble with Lenin,” John Mearsham remarked in his “Menshevik” history of the October revolution So Bright an Illusion, “was that he was a complete amateur.”

News Ltd is the Soviet Union

What never fails to make me laugh is about modern wiriters about the Russian revolution . Nothing seems to please them about Russians or why the people supported 2 revolutions. Even today you have books on the ussr red army role during the Second World War , claiming the rank and file didn’t want to fight the Germans and their officers were just cold blooded killers of their own people. So one shouldn’t be surprise to find a tv show about one of the leaders of the 2 revolution, he and his leader was lead By the nose by a Jewish banker and both leader didn’t have a clue what they were doing. It is a bit like saying a certain cook made the best Irish stew, his fame to claim is he brought to the pot potatoes.

Great piece. I am really surprised that you didn’t mention the obvious parallels between the representation of Parvus as a representation of the Jewish Bolshevik/Capitalist puppet master and the current representation of George Soros, who has become the bete noire of the authoritarian right in Eastern Europe. What’s disheartening is that the tropes of Jewish puppet masters just keep getting renewed. One thing the authoritarian Right lacks is imagination. History doesn”t seem to phase them. What’s most important about your piece is that unless people know their history, the cardboard representations in drama work much better at promoting a warped and insidious set of stereotypes – ones we hoped had been securely ditched in the dustbins of history.

Sadly, you are correct, with the qualification that in many places, depending where you are, the Jewish threat is being supplanted and/or supplemented by the Muslim threat.

“The notion that the country was pitched into the horrors of Stalinism by a Jewish plot has allowed Russian nationalists to hold the belief that loyal Russians were tricked into deposing their ancient order.” You read more of this stuff than I do, so I’m curious: how do these people account for the February revolution? Surely that was what actually deposed the “ancient order” – was it masterminded by the Jews as well?

It appears to be even more complicated than what Guy has said. From the almost total absence of Russian celebrations of the 100th anniversary of the 1917 revolutions, we can assume that Lenin, as well as Trotsky and others, have been swept into the dustbin of history, at least in Russia. On the other hand, Stalin has been resurrected as the savior of Russia from the Nazis and a model of a great Russian patriot. Maybe Guy can enlighten us on this bizarre phenomenon in a future article.

Having a quick scan of the director, the production company and others involved in Trotsky’s inception to its Netflix screening, it shouldn’t be too much of a surprise that there may have been a little seepage of, what us peoples on this side of the fence would call, anti-semitism. “…the resurgence of a literal-minded anti-Semitism as an unremarkable feature of right-wing politics, and the culture more generally, from Belarus to Wollongong” might just be a sensitive overreach in this case.

This was a fascinating and well produced/directed series that I enjoyed very much. Interesting to see these events unfolding from a non ‘purely western’ perspective for a change.