Helloworld CEO and Liberal Party treasurer Andrew Burnes was relatively unknown a few days ago. Now, not so much...

Just days ago, Andrew Burnes was a relatively unknown travel executive who happened to be the federal Liberal Party’s treasurer. Now, he is at the centre of yet another expenses scandal following reports his company paid for Finance Minister Mathias Cormann’s family holiday flights. Cormann has subsequently paid for the flights claiming the payment to be an “administrative error”.

Since those reports Burnes’ political and business relationships have come under the microscope, and Scott Morrison is attempting to hose down claims that US ambassador and former treasurer Joe Hockey told his staff to meet with one of Burnes’ companies ahead of its bid for a government contract. On Thursday, a letter was revealed in Senate estimates which claims Burnes told a staff member “Hockey owes me”.

But let’s start from the beginning.

Who is Andrew Burnes?

Burnes, who is admitted as both a solicitor and barrister in Victoria, entered the tourism world when he founded the AOT Group in 1987. He’s done pretty well for himself since then. Burnes is now CEO of Helloworld (the company at the centre of the Hockey and Cormann affairs), takes home more than $500,000 a year, and is worth at least $225 million.

Burnes has a long association with the Liberal Party. Before assuming his current role in 2015, he was treasurer of the Victorian state party from 2009 to 2011, and his companies have donated more than $170,000 since 2000. Burnes and Scott Morrison have crossed paths in past lives, with the former joining the board of Tourism Australia in 2006. This was the same year Morrison lost his job as managing director after a stoush with the tourism minister.

The relationship between Burnes and Joe Hockey runs much deeper. As The Sydney Morning Herald reported this week, Hockey told embassy staff in Washington to meet with an executive from a Helloworld subsidiary. At the time, Hockey was one of Helloworld’s top 20 shareholders, with a stake worth $1.3 million.

Hockey and Burnes are described in several reports as “best mates”, and the two have been there at critical points in each other’s lives. When Hockey turned 50, just a month before the leadership spill that would effectively end his political career, Burnes hosted a shindig at his place in the Victorian town of Echuca.

It was reportedly as a favour to his friend that Burnes took up the voluntary role of Liberal Party treasurer earlier that year. He could hardly have chosen a more difficult time to take the helm. Burnes’ predecessor, Philip Higginson, had been shafted following a bitter falling-out with Tony Abbott and his chief of staff Peta Credlin, and the Abbott-Hockey reign was in its final throes. After the leadership spill in September, it was Burnes’ guidance that led Hockey to quit parliament. On the night of the spill, Hockey and Burnes partied the night away at a raucous (but slightly mournful) piss-up held in Abbott’s office, and according to one observer, shattered Abbott’s marble coffee table under their combined weight. Hockey disputes this.

The Helloworld affair isn’t the first time Burnes’ political connections have been pointed out when discussing his business deals. In 2016, reports suggested Burnes could snag millions thanks to a re-zoning deal made by the Baillieu Liberal government. Burnes had bought land in 2012 at Fishermans Bend in inner Melbourne and, just months later, then-planning minister Matthew Guy controversially rezoned the area from industrial to “capital city”. Burnes was then able to propose a 150-metre tower.

Fairfax reporters said they were “not suggesting any inside knowledge of wrongdoing on Mr Burnes’ part”; Burnes refused any interview on the matter. It was also pointed out that numerous other Liberal-adjacent figures stood to gain from the zoning changes. Unfortunately for Burnes, his profits from Fishermans Bend appear to have been cut down to size, after the Andrews government recently imposed a slew of height restrictions on new development in the area.

Once the storm around Helloworld blows over, Burnes may face the even more daunting challenge of replenishing the Liberal Party’s election war chest. In 2016, with the coffers already dwindling, they needed $1.75 million from Malcolm Turnbull’s own pocket (the biggest donation made that year) to cling onto government. After the donation was revealed, then federal director Tony Nutt denied that the party was broke or in debt, praising Burnes’ sound management of the finances.

Still with Turnbull unlikely to be so generous this time around, and with donors reportedly growing skittish following yet another leadership spill, Burnes may need more than just sound management to save the party from a major funding crisis. 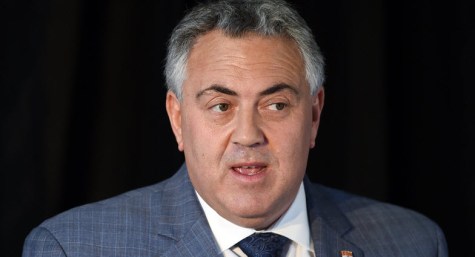 Turnbull: why the Liberals should keep him

Helloworld obviously knows the cost of loyalty. Its Loyalty Program is very generous to politicians. Matthias swings his loyalty for $2.5K worth of travel for this trip (who knows about the other two) but what did Dutton have to pay to swing Matthias’s loyalty from his leader of the night before Dutton made his play for leadership?

It’s encouraging to hear that Joe Hockey has a friend.

They’ll always have Tones’ table. I wonder if the big J has crossed paths with Chris Christie … there’s a match made in heaven.

Odd – “(they) shattered Abbott’s marble coffee table under their combined weight. Hockey disputes this.“.
Surely Smokin’ Joe Leventy would have been more than sufficient?

I don’t care who he is, I just want his phone number…… The amount of time the rest of us have to wait in a queue waiting to make a booking?

Just heard Poodles in QT defending Hockey as one of the greatest treasurers this country has ever seen – I nearly choked..!!
The one thing this mob excel at is bare-faced cheek.

Bring on a federal ICAC…as soon as possible! There are enough dodgy deals from members of this government to keep them busy for years!