High-speed rail is a tantalising pre-election option, but does it make any sense? Crikey does the maths.

With a federal election imminent the Coalition have been running hard on fear. Boats could be on the horizon, they’re saying. But how effective is fear? The lessons of the 2018 Victorian election must surely still be echoing around the Liberal party.

Former Victorian Liberal leader Matthew Guy’s fear-focused election campaign eviscerated the Libs in Victoria and caused him to step down as leader. The lesson is one federal Liberals cannot ignore: what if fear is not enough?

The other big lesson from the state election, other than the limits of fear, is the importance of big infrastructure visions. Labor promised Melbourne an enormous and hitherto undreamed of scheme: a massive orbital rail loop connecting outer suburbs. The promise — which cannot be delivered for decades and is not considered a priority by infrastructure wonks — got a lot of positive attention. A lot.

Scott Morrison must be pondering the upcoming federal budget and figuring out how to get a bit of that positive reaction for himself.

The obvious federal equivalent? High speed rail. The plan to link Melbourne, Sydney and Brisbane with very fast trains already exists. It is an easy carrot to dangle. Indeed the federal Libs have form in this regard. Malcolm Turnbull floated dreams of high speed rail before the 2016 election, although the party walked it back afterward.

What really made Daniel Andrews ethereal idea seem more concrete was a map of the proposed links. Turnbull’s approach last time was to talk of funding mechanisms. That’s important but it is not electoral gold like a map that makes everything seem far more concrete. So let’s say an enormous high speed rail announcement is imminent, complete with gloriously detailed maps.

Should we see it as a disaster or a triumph? There are arguments on both sides.

Whether Scott Morrison pulls high-speed rail out of the bag this election or another politician does so next time, it’s worth bearing both the pros and cons in mind. High-speed rail is tantalising. But it has a risk of being an enormous white elephant. 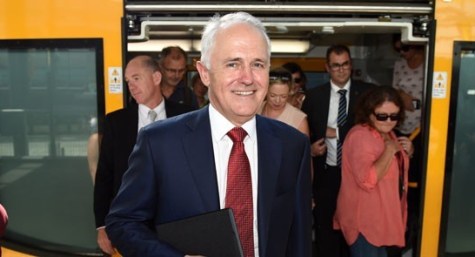 The little policy that couldn’t: high-speed rail’s failures to launch

I’d bet the cost to have the Chinese built it would be massively cheaper. They have a vast HS rail network now.
Rather then build aeroplanes, we buy them from US/EU manufacturers. Why do we need to construct someone elses railway system especially for just single line.

My first thought too was why not get Chinese builders ? Where’s this $110 billion figure from ? The usual trick when a govt doesn’t want to build something is to pull a gigantic number out of its arse.

It would have to get mostly built under one govt though. The Australian way is to wreck predecessors projects then blame them. We’d risk ending up with a hybrid mixed mode train powered by coal for one half and bullshit for the rest.

It’s still quite possible it could stay on the radar if they build that dumbarse airport at Buggerys Creek.

While the trains aren’t cheap, 99% of the cost would be building the lines.

I recently watched a re-screening of the Utopia episode around the very fast train. Please let us not have a re-run of that discussion. Unfortunately its time has passed – like with practically everything else that requires government involvement. Seizing the moment is quite beyond their ken – they have to wait too long to see who will donate most to their declining coffers.

Quite obviously from the above, the numbers don’t stack up. Plus the fact that overseas high speed trains average well below 300kph, making the Melbourne to Sydney trip considerably longer, especially if you include 3 stops along the way. China’s last high speed train replaced a conventional 125kph train, our Sydney to Brisbane averages just 65kph! Now if a smart political party were to suggest a nation building scheme such as building fast local trains to decentralise our major cities that would be a realistic idea people could get behind. We wait in vain…

Reads this report. It answers most of your concerns.

Re the travel time element, I think three hours’ train travel between Melbourne and Sydney – as long as it went to the current central train stations – would be quite successful. The flight at the moment takes about an hour and a half, and when you factor in travel time to and from airports, and allowing extra time to get through security, that competes quite well. On top of that you have the sheer convenience of going from city centre to city centre. I think it could even take as long as four hours, and it would still be successful.

Not if following the election the very fast train is given the NBN treatment.

Well, we know 300kph is pie in the sky, add in the drive to station, parking, waiting, 3 stops along the way and were probably up to 4.5-5 hours. I doubt the price will be less than flying, so add meals and drinks and really, would you really rather not fly?
I say, for those who have the time, upgrade the current track for a fraction of the price, buy new faster chinese trains and travel Melbourne to Sydney in maybe 7 hours instead of the current 11 hours. Use the savings for quick express train lines to decentralise city living.

Now that sounds like a reasonable and effective compromise and would get support from retired people like me who are time rich and don’t mind train travel but feel the current interstate service is way too slow. I’d much prefer a comfortable train seat with extra leg room and a table than a cramped plane seat in the air. It would also be much cheaper and quicker than driving (and far less stressful with our busy roads), with the added overnight accommodation costs. It is much more comfortable working (internet and laptops) on a train where you are also much more free to walk around and also to enjoy a drink at the bar.

The Brisbane to Sydney travel time is even longer with many trips requiring a bus service to link with a train at Casino. A very fast train service could cut much more than four hours from this journey. It would also mean that I could take my bicycle which I now use as my main local transport, along with public transport which I find more than adequate for my needs in Brisbane, Sydney and Melbourne. I’m assuming a very fast train service between Melbourne and Sydney wold include a stop in Canberra.