Crikey readers went in on Home Affairs’ ongoing Paladin controversy yesterday, speculating on what the fallout — if anything — will be for department minister Peter Dutton. Elsewhere, readers added to William Bowe’s analysis of Scott Morrison’s alleged “Tampa” moment (which he doesn’t suspect will be much of a moment at all). As readers pointed out, Morrison has figures to discuss if he wants to shift the blame for people smugglers into Labor’s lap.

Lee Tinson writes: Dutton has to bear responsibility, although I know he never will. But the department heavies have entirely screwed up his (excuse for an) organisation as well. I don’t really know who Pezzulo is, but he’s been around the public service for a long time and is increasingly being called to senate committees to explain his own incompetence. So what do we get? A minister whose only interest is his perceived personal power. A prime minister who is nothing but a bogan in a suit prepared to allow people smugglers into Australian waters so he can blame the opposition.

Mike Smith writes: Dutton can’t really evade responsibility. Individual ministerial responsibility is a constitutional convention in governments using the Westminster System — a cabinet minister bears the ultimate responsibility for the actions of their ministry or department.

Laurie Patton writes: As former Immigration Department deputy secretary Abul Rizvi has pointed out, Peter Dutton is the minister who has seen the largest number of non-genuine asylum applications. What’s more, last year nearly 28,000 people came by air and claimed protection visas, compared with around 18,000 asylum seekers who arrived by boat in the Gillard/Rudd years.

Denise Marcos writes: In recent days PM Morrison has revealed that, during the past four and-a-half years, over 800 asylum seekers on more than 30 boats have been turned back when intercepted at sea. By his own admission this is evidence that current policy has not “stopped the boats”, it simply means the hapless passengers have not set foot on an Oz beach. Ergo, Coalition policy has not been sufficient deterrent to people smugglers who, in those 30-plus launchings, have continued to peddle their trade. A humanitarian tweak allowing medivac which affects only those currently living on Manus/Nauru will not make one iota of difference. The government has not stopped the boats being launched and risking lives — they have stopped the landings. One wonders how many souls are still drowning? 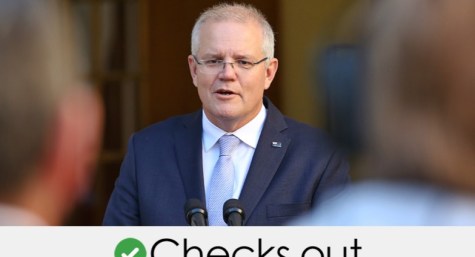 Does Scott Morrison’s cabinet really have a record number of women?

And the 30 refugee boats doesn’t include the one that successfully landed in Daintree when Dutton was distracted with trying to pinch Malcolm’s job.

Dutton the artful dodger? Take responsibility? Ha Ha….
But I would love to see him and Pezzullo front a Royal Commission or a Federal ICAC.