No, this isn’t Morrison’s ‘Tampa moment’

It's going to take a lot more than the goings-on of the "Canberra bubble" to transform the medivac loss to the Coalition's advantage come election time.

The contours of the culture wars were sharply in evidence last week in commentary on the government’s parliamentary defeat on asylum seekers — not just in terms of the issue’s moral dimensions, but also in its electoral impact.

For much of the Murdoch empire, the parliamentary vote and the government offensive that followed have amounted to a “Tampa moment” for Scott Morrison, who now finds a seemingly improbable election victory within his grasp.

The counterpoint was articulated by the ABC’s Barrie Cassidy, who contrasted the genuine sense of crisis that prevailed in 2001 and for much of the Rudd-Gillard period with the government’s current effort to will the issue back into prominence. Cassidy deemed that it was “too obviously just a scare campaign”.

Perhaps inevitably, the first national poll since the bill’s passage is being seen through this lens.

Conducted by Ipsos and published overnight by Nine newspapers, the poll finds Labor’s lead being slashed from 54-46 to 51-49 — which, The Australian proclaimed this morning, showed that Labor was being “badly punished” for its position on the bill.

For all anyone knows at present, this reading of the situation may be borne out in time, but for now there is good cause to be sceptical.

The field work period for the Ipsos poll began as the bill made its passage through the House of Representatives on Tuesday evening, and continued through to Friday. While that technically makes it the first poll since the bill was passed, any seasoned political strategist will tell you that all but the most high-impact events take several days to filter through the public consciousness.

Given the previous Ipsos result of 54-46 dates all the way back to December, there may well be other explanations, perhaps no less worrying for Labor, to explain the shift.

That’s if the shift is indeed real rather than apparent, for which Ipsos offers only scant evidence.

The widespread media coverage of the poll belies the scepticism with which much of the press gallery views the Ipsos series, which is given an airing on journalists’ Twitter accounts with seemingly each new result (with the inevitable exception of those from Nine newspapers).

The latest result typifies the pollster’s idiosyncrasies in recording the Greens on a thumping 13%, while both major parties come in below their primary votes from the 2016 election. Even if it were otherwise, it would remain the case that individual poll results should always be treated with caution. The theoretical error margin on this occasion is nearly 3%, which covers possibilities including a much smaller movement away from Labor, or even no movement at all.

As it happens, there was another, less widely publicised poll over the weekend that gave strong cause to doubt that anything particularly radical was going on in voterland while Ipsos was in the field.

Conducted by YouGov Galaxy for The Courier-Mail, the Queensland-only poll recorded a swing of 6% to federal Labor in the state the worst result for the Coalition out of eight such polls conducted since 2016.

It remains open to conservative optimists to argue that last week’s events changed the game by moving the agenda to terrain favourable to the Coalition, but for now this is a hypothesis backed by little real evidence.

Indeed, the recent record of polling raises doubts about its central premise — as shown in the chart below, Essential Research’s twice-yearly questions on which party respondents most trust to deal with various issues have found the Coalition’s advantage on asylum seeker policy steadily disappearing since it came to power in 2013. 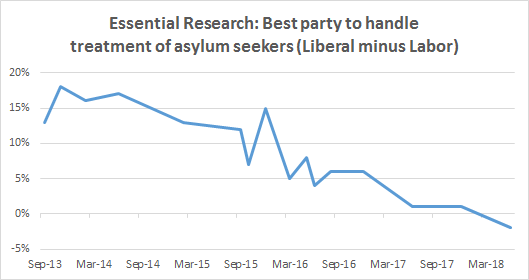 The same pollster also recorded an even balance of opinion in October as to whether families and children on Nauru should be transferred to Australia, never mind any qualifications about medical treatment. This is a pattern familiar from the Howard era, when the government’s hard line on treatment of detainees lost its appeal as the boats stopped arriving.

The lessons of history suggest that only a substantial reactivation of boat arrivals, rather than the goings-on within what the Prime Minister likes to call the “Canberra bubble”, would be forceful enough to so transform the situation as to justify talk of a “Tampa moment”.

Poll Bludger: are the Greens really polling at 16%?

After Trump’s self-aggrandisement, lies, policy failures, sheer lunacy and the international derision, incredulity and in the end laughter at the American people, you’d think the Libs would steer away from a similar type of scare policy over our boat people. A thousand violent criminals? Rapists? Morrison et al, we can see right through your scare mongering and it won’t work. About time you did some constructive nation building instead.

Some constructive nation building from the people that brought us fibre to the node ? Yeah,nah.

One wonders whether the Morrison govt is desperate enough to allow a couple of boats to ‘slip through’ to Australia soon. Or perhaps even fund some people smuggler operations from Indonesia with a guarantee of success! There are still plenty of doubt about Siev X that remains unresolved. Desperate polls call for desperate actions!

Roger, +10 from me. I was going to opine what you wrote. Well done on the cynicism.

The Curmudgeon
Reply to  Roger

Yes, time to set fire to the Reichstag.

Sportsbet et al have probably already posted odds on a date for the first one. Late April is my prediction.

I was thinking the same thing Roger. I believe this rotten government would almost pay someone to bring out some boat people. Morrison offers nothing to this country except divisiveness and hate. Where are the hopes and dreams for a better future for all.

Of course they will

Yep. Expect a few boats anytime. Heading for Christmas Island. After all, our Chief Muppet invited them. I heard him do it. That’s the kind of guy he is.

It’s their best bet,so we can be sure every effort will be made to let boats in,with a heads up to Murdoch’s trash media.Exciting times,and so predictable.

I’m sure Spudhead has already instructed border farce to let a dozen or so through.

Such is the sheer hatred being shown by Scott Morrison, Peyer Dutton and the Attorney General Christian Porter is enough to make one wonder how much of this hatred is manufactured? If this is so a slow look at history would reveal hundreds of cases where the disagreeing party has rigged up a convincing example of being right. Accordingly, no one should be surprised to see an asylum seeker’s boat lobbing into the nearest Australian port. Gratis the Liberal Party.

My personal belief is that the polls this year are going to skew slightly right of where they should be, because of the ‘Marriage Equality’ factor.

Back in 2017, in the lead-up to being forced to the polls for a referendum that most of us didn’t want, there was a massive push by pro-equality groups to get first time voters in their late teens and early twenties on the electoral roll. The result was a much bigger than usual enrolment by this age group, (as compared with a normal election year), and the political views of that age group tends to skew progressive. These people are now conveniently also on the roll for the 2019 election, but they overwhelmingly do not have (or answer) landline home phones, and/or are more likely to reject calls on their mobile from numbers they don’t recognise. The end result of these two factors is that they are often under-represented in phone poll results, a fact that the poll companies do recognise but try to downplay and spin their way out of. This would help explain how the pollsters completely missed the landslide that occurred in the Victorian state election.

It would be the ultimate irony if the ultra right wing’s absurd attempts to hold back marriage equality also resulted in more of their fellow travelers being turfed from office by the votes of those people, many of whom may not have bothered enrolling in the first place, if marriage equality had been legislated without a public vote.

I agree Evil Brian. Someone is desperately interested in our households voting intentions, federal and state. We must have had 20 calls in the last month, most to landline, and even us oldies refuse to respond.

I think their methodologies are losing relevance. Perhaps polling companies will be the next disruption.

DF
Reply to  Master Of Coin

Poll companies call mobiles. I’m in my 60s and have a landline but also get called on my mobile. Reachtel robo-polled me at dinner time last night.

Master Of Coin
Reply to  DF

They do DF, but landline phone numbers allowed the pollsters to accurately pinpoint the electorate in which the phone user lived, before they made the call. Mobile numbers can’t even tell them in which state the user resides. In the old days most people had their landline published in easily accessible directories. Very few people do that with their mobiles.

You hit the nail on the head when you talked about receiving robo-calls on your mobile. Random robocalls are almost the only way the companies can reach mobiles, but it also means that it’s much more difficult for them to get an accurate cross-section of the voting population, either generally or within specific regions, which is essential in reducing the polls margin of error.

If Labor falls for this weak attempt they deserve a hiding.

However, the fact that Labor are even heading down this compassionate path for the first time in years indicates that their expensive and extensive private polling has demonstrated that Australians understand that 2001 is a long time ago and things have changed.

Also it’s much easy to scare someone the first time around, the sequel is rarely as scary. Not to mention that the Liberal’s claims of a strong economy are grossly overstated no matter how they spin they numbers…