The University of Wollongong's Ramsay Centre degree has a novel approach to cultural appropriation.

Tip of the sombrero. After months of culture warring, the University of Wollongong released details of Australia’s first Ramsay Centre-sponsored degree in Western Civilisation. Select students who display the required (and of course, undefined) “Ramsay Attributes” will be given $27,000 per year for the privilege of studying a glorified high school English course.

Fortunately, UOW and the Ramsay Centre seem to have taken on board criticisms that the program is a Trojan horse for an uncritical and ahistorical glorification of Western civilisation, and will give students the opportunity to empathise with and understand non-Western cultures. And what better way to do that than a spot of cultural appropriation?

In a unit entitled “The Great Conversation”, an appreciation for other cultures will be “achieved through organised role-playing games and by getting students to enact rituals from cultures other than their own”. Ramsay Centre’s first blackface scandal in five, four, three…

Nialling their colours to the mast. Does anyone else find it weird that The Australia Financial Review is giving credence to the financial views of British historian Niall Ferguson, a man who thinks there was too much regulation of banks after the financial crisis? Or, for that matter, that he has a top slot at the AFR’s March “Business Summit”?

A quick precis of Ferguson’s work: he is a long-term spruiker of imperialism and denialist of British imperial atrocities; has argued India was better off under British colonial rule; famously humiliated himself in an attempt to attack Barack Obama; enthusiastically supported the Iraq invasion; wanted Iraq occupied for 40 years; wants Iran bombed; used a homophobic smear to criticise JM Keynes (then, all class, claimed some of his best friends were gay); and, just last year, was revealed to have urged right-wing students at Stanford to conduct “opposition research” on a progressive critic, prompting his resignation from a free speech group. Of course, to know that sort of detail about Ferguson’s behaviour in 2018, staff at the AFR would have had to have engaged in some serious research… like reading the AFR, which reported his resignation.

The (Twitter) beast is stirring! For those lucky enough to have no involvement with Twitter, getting “ratioed” on that platform occurs when you make a remark deemed offensive or ludicrous enough that the ratio of comments abusing/criticising/mocking you massively exceeds the numbers of people retweeting you. That was Sky News’ David Speers’ experience yesterday when he tweeted what appeared to be a talking point cooked up in Peter Dutton’s office as part of the government’s confected hysteria about the invasion of brown-skinned people that would follow refugee medivac legislation.

“I’m told Australia’s intelligence agencies believe “the beast is stirring” since the passage of medevac bill,” Speers warned. By this morning, the tweet had over 726 comments and just 174 retweets — a very definite ratio. Speers, along with Kieran Gilbert and Tom Connell, is about all the channel has left by way of journalistic credibility as the far-right frolics there grow ever loopier, but he might find himself unfortunately appended to what is likely to be a phrase heard over and over between now and the election. 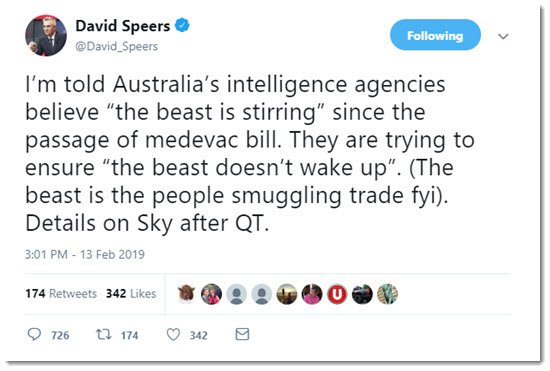 Dammit, Janet. You know that the right is getting really erratic when “Planet” Janet Albrechtsen gets a wobble in her orbit. Planet has been dull of late, eclipsed by wacky hard-right George Soros obsessive Jennifer Oriel. But she can still rage across the heavens, and this week’s column was a prime example. The topic is the usual: the Greens are anti-Semites, hooked this time to another right-wing anti-Semitic attack after swastikas were scrawled across murals at Bondi Beach, an area with a large Jewish community.

What’s remarkable is her direct accusation:

… last Friday, in Allawah in Sydney’s South, Jewish leaders arranged a regular Shabbat dinner … one of many … These are non-political. Yet Greens have, for years, refused to be part of these dinners … That is not tolerance. That is anti-Semitism.

Well, the speaker at the dinner in question was Vic Alhadeff, the fire-breathing ultra-zionist head of the NSW Jewish Board of Deputies, so how “non-political” they are is one question. But an even more intriguing one is the proposition that a non-act — not attending a dinner — is a positive act of anti-Semitism. This seems an unreasonable standard of conduct to build a defamatory accusation of anti-Semitism upon. It gets worse. In reference to the Bondi Beach defacement, Planet notes that neo-Nazi groups  were “likely” responsible, but “the organisational bigotry within the Greens is a slyer form of anti-Semitism”.

Wait, is Planet is saying that non-attendance at a dinner is the equivalent of graffitiing Bondi Beach with swastikas? How did such an outrageous accusation make it onto the page? Whatever the case, one wonders if NSW Greens office-bearers or MPs will consult a good no-win no-fee defamation lawyer.

I’ve seen a Catholic Church in Waverley have a swastika spray painted on it – quickly repainted the next day – and know of a Jewish household that had one scratched into their garage door, just off Bondi rd. Both in the past two years, and neither was reported anywhere, so could be more.
Hopefully it’s a nutter rather than organised neo-nazis, but someone keeps doing it in the Eastern suburbs.

However academia is also currently beset by dubious philosophies masquerading as serious fields of study which are often based on poorly evidenced and ahistorical critiques of western civilization.

Academia and the benefits of it to wider society are under siege from ideologues of all shades like never before. Let’s not get bogged down of Ramsay and lose sight of the bigger picture.