A small Tasmanian community newspaper is relaunching after News Corp sold it to a public relations agency last year, and it's not a unique case.

This week, a small local newspaper serving Tasmania’s Derwent Valley will publish its first edition under its new owner. The Derwent Valley Gazette, previously owned by News Corp, has been printed for the people living in and around New Norfolk since 1953 and was a member of the Australian Press Council.

Its new owner, though, isn’t another news company, but one of Tasmania’s most influential public relations firms, Font PR, which has been under scrutiny since it last year added two longtime Liberal staffers to its payroll as partners.

The Gazette was News Corp’s only free suburban newspaper in Tasmania, and its new editor will be Roger Hanson, a former rural reporter with News Corp’s The Mercury, Hobart’s daily newspaper.

Font PR last year appointed as partners Brad Stansfield, former chief of staff to Liberal Tasmanian Premier Will Hodgman, and Brad Nowland, former Liberal press secretary to the agency. Stansfield writes a regular column for The Mercury, and the agency is listed on the Tasmanian register of lobbyists as representing the Catholic and Anglican churches, Tasmanian Independent Retailers, Tasmanian Gas Pipeline and the Football Federation of Tasmania. Airbnb has recently been consulting with the state government on fines relating to short-stay accommodation, while the two churches were also last year consulting with the government on legislation.

Font also runs and produces the Tasmanian Business Reporter, a monthly newspaper, which is owned by the Tasmanian Chamber of Commerce and Industry.

Both agencies employ staff directly who write content for and produce the newspapers. At Corporate Communications, a “PR consultant” is the editorial manager for the three papers, while also working on projects for the consultancy’s clients.

The Mercury’s list of the state’s top political powers published in June last year featured Font PR’s managing director Becher Townshend at No. 3 and Corporate Communications’ managing director Nick Turner at No. 4. According to the list, Turner is “seldom — if ever — himself in the spotlight. But his deft touch always plays a role in influencing outcomes.”

Mercury commentator and columnist (and Crikey contributor) Greg Barns said the newspapers should be “as independent in their views and presentation of the news as possible”.

“Local newspapers are an important outlet for communities, particularly at the local and state government level,” he said. “This is not an attack on PR firms but they are inherently conflicted because they act for, and advocate on behalf of, clients. What happens for example if Font PR is acting for a client with business interests in the Derwent Valley that are attracting community opposition. How does it report that conflict in the Derwent Valley Gazette which it edits?”

University of Canberra assistant professor in journalism Caroline Fisher told Crikey that when PR agencies own newspapers, they still have to ensure there are clear declarations of any conflicts and to not present press releases as news.

“If it doesn’t say anywhere on an article that there is a conflict, or that something labelled as ‘news’ is actually a PR product, that implies that it’s got some kind of news element in it,” Fisher said. “Unless it’s clearly declared, people might think that it’s independently sourced rather than advertorial or a press release.”

She said that advertorials — or native advertising — were increasingly used by small and large publications. “There’s a blurring, even in the mainstream news services, between advertorial and news, but that should be labelled,” she said. “The challenge for [Gazette editor Roger Hanson] will be making sure he’s allowed that independence … There is nothing wrong with PR. It is an important part of the communication landscape and many former journalists adapt their skills to work in PR. The issue is making sure that the audience understands what is PR and what is independent journalism. That needs to be made clear to the reader.”

According to Fisher, all commercial news websites had conflicts of interest, but if they weren’t properly declared or readers thought they were only being fed the owners’ voice, they would turn to social media or something else for their local news.

“Hypothetically, if there’s a big issue in town that does affect the local community and it’s either being ignored or only covered in a way that supports the owner’s voices, then it isn’t reflecting the voice of the community, and there are ways for the community to respond,” she said. “People might start relying on social media and other websites … the advantage of social media and the accessibility of online publishing is there could be alternative voices that emerge to challenge the perspectives of other media.”

Font PR managing director Becher Townshend said they took on the newspapers because they see the region as one of Tasmania’s up and coming areas. “There are a number of successful regional, community-based papers in Tasmania and there is no reason why the Derwent Valley Gazette can’t continue to be one of them,” he said. “Our mission is clear: for the paper to be successful it must serve the community and that’s why we’ve appointed an independent editor with a strong background in regional reporting.”

Corporate Communications managing director Nick Turner said the company owned the community newspapers as a business decision, and it operated under the Public Relations Institute of Australia code of conduct. “The papers are profitable, and the feedback is good,” he said. “All of it was based on a commercial reality that we believed there was a dollar to make in that community news space, because there wasn’t anything like that in and around Hobart.”

Turner said they employed one journalist to write for the three newspapers, and they could use their own news judgement on what to run. He said they would not do PR work for any of the local councils their papers cover, as it would be a conflict. The Corporate Communications newspapers are not part of the Community News Association or the press council. But Turner said he would consider it, if there were some benefit to the company or readers.

Now that the Gazette has changed hands, it is no longer part of the press council. A press council spokeswoman said applications for membership would be considered “on the basis of all their circumstances”. 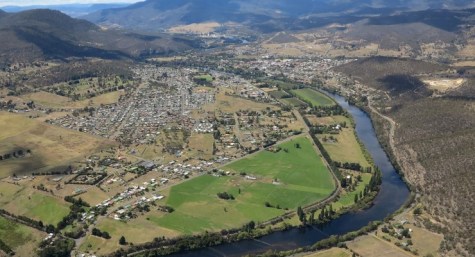 So every News Corpse political article should be caveated as ‘Presented in behalf of the Liberal Party and the IPA”?

How and why . . . has Tasmania come to this? Much the same reason that the mainland has . . . power, greed and politics.

Interesting story with a couple of factual errors.
The Derwent Valley Gazette is not and has never been a free suburban paper. It’s a regional, paid-circulation weekly.
There is at least one independently-owned free suburban paper in greater Hobart – the Kingborough Chronicle produced by the Huon Newspaper Co.