A wealthy Chinese developer with deep links to both sides of Australian politics wants his money back after being kicked out of the country. What happened?

Huang Xiangmo, a Chinese property developer with ties to the ruling Communist Party, poured millions into the coffers of Australia’s major parties and built deep connections with high profile politicians since his arrival in Australia in 2011.

But Australia quickly soured on Huang after several reports about his role as an influence-peddler for Beijing put him on ASIO’s radar. Recently, his application for citizenship was rejected and permanent residency cancelled over fears he was amenable to carrying out acts of foreign interference. He’s now stranded out of the country.

Incensed by what he calls a “grotesquely unfair” decision to cancel his citizenship, Huang wants his money back. It’s estimated that between 2012 and 2016, Huang, his businesses and associates gave dozens of donations totalling around $2.7 million to various branches of the ALP, the Liberals and the Nationals — and these are just the donations which have been disclosed.

On Monday, Huang lashed out further, claiming he was the victim of a media smear campaign, and comparing Australia’s attitude to that of a “giant baby”.

Boasting a rags to riches story emblematic of modern China, Huang made his billions on the back of Shenzhen’s property boom in the early 2000s. In 2011, Huang moved to Australia, reportedly enamoured with the “clean air”, just in time to avoid being caught up in President Xi Jinping’s sweeping anti-corruption drive, which would fell some of his closest associates. After promptly installing himself in a $12.8 million Mosman mansion, Huang got to work flooding huge sums of money into Australian politics and academia.

But the combination of Huang’s eye-watering political expenditure, and his extracurricular activities with pro-Beijing lobby groups, meant the spectre of foreign influence was never too far away.

In 2014, he became Chairman of the Australian Council for the Promotion of the Peaceful Reunification of China. The group acts as a kind of mouthpiece for Beijing’s foreign policy objectives, particularly with regard to independence movements in Taiwan, Tibet and Hong Kong, and territorial disputes in the South China Sea. But the Council is also closely linked to the United Front Work Department, a Chinese government agency dedicated to the art of persuasion, subtly expanding the party’s influence at home and abroad.

Huang also flexed his influence in the academic world, donating $1.8 million to the Australia-China Research Institute at the University of Technology in Sydney.

Huang’s relationships with these groups were crucial to ASIO’s recommendation to ban him. Like most decisions made by ASIO however, it remains shrouded in secrecy. Still, as early as 2015, the security agency was actively warning politicians to steer clear of Huang, claiming he had deep ties to the Communist Party. This clearly fell on deaf ears — nearly every high profile Australian politician of the time has a now-embarrassing photo with Huang.

Most infamously, Huang was embroiled in a series of scandals that toppled Labor’s Sam Dastyari. Huang, who once paid Dastyari’s legal bills, appeared with him at a press conference where Dastyari appeared to support Beijing’s stance on the South China Sea territorial dispute, contradicting his own party’s policy. At another meeting between the two, Dastyari warned Huang his phone was probably being tapped. Recently, former prime minister Tony Abbott ignored a warning to help secure a donation from Huang.

By the time ASIO was warning the major parties, Huang had already poured millions into Australian politics, an impulse he says is driven by “the Chinese habit of treating other people in a nice manner and not [being] accustomed to saying no. In 2012, he made his first donation of $150,000 to NSW Labor, under his alternative name Huang Changran.

Huang dramatically increased his spending the following year, particularly in the lead up to the 2013 federal election. Huang himself gave just $40,000 to the Liberals, but his companies, Yuhu Group and Yuhu Investment Trust, made four donations totalling $460,000 to NSW and federal Labor and 14 donations totalling $525,000 to Liberal branches in NSW, Victoria, Queensland, and Western Australia. Most of these donations came in the three months before the election. In 2014-15, Yuhu donated another $20,000 to the NSW division of the Liberal Party.

But not all Huang’s donations were made directly between Yuhu and the major parties, and in subsequent years money flowed from other businesses Huang was less obviously involved with. For example, in 2014, two donations of $50,000 were made to the Bayside Forum, a Liberal fundraising group for former Trade Minister Andrew Robb, who himself had close connections with China. One donation was from Chaoshan 1 Pty Ltd, of which Huang was a director, and the other from Fu Ocean, reportedly run by an employee of Yuhu.

That year, another Huang company, Mandarin International Investments, which is registered at the same location as Yuhu, gave $55,000 to Labor, $42,960 to NSW and South Australian Liberals, and $15,500 to the Nationals. Another company which shares an address with Yuhu, Jade Fisheries, gave $50,000 to the WA and Tasmanian Liberals that year.

Where the money went

Some light has also been shed on what specifically Huang’s money has been spent. A planning disclosure made to Sydney’s Ryde Council over a proposed shopping centre redevelopment revealed that Huang had paid $55,000 to the ALP for a boardroom lunch with Bill Shorten in 2015. The documents also outline specific local branches which received donations from Huang-affiliated businesses in the lead up to the 2016 federal election, including re-election campaigns for Finance Minister Matthias Cormann and Tasmanian Liberal Andrew Nikolic.

Many further donations were made during this period by friends and employees of Huang and his companies. The upshot is that Huang’s demand for his money to be returned is deeply impractical. The funds came through at least 40 donations, to different branches of parties. They were often given to specific campaigns in the lead up to elections, meaning the money has almost certainly been spent.

When Huang first moved to Australia, his friends and business associates scrambled to buy property on the same Mosman hillside, hoping to soak up some of the magnate’s “good fortune”. After being banished from Australia with a serious case of buyer’s remorse, it appears that fortune may have dimmed a little. 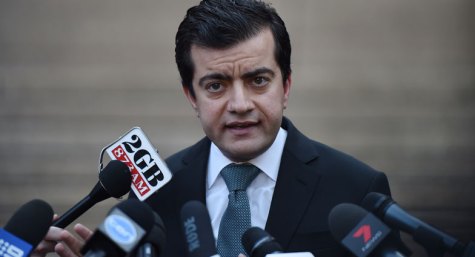 China — boldly doing what corporations have been doing for decades

Perhaps Huang Xiangmo failed to have translated for him the meaning of Caveat emptor.

“Pssst. Wanna buy a second-hand Poli-morals. You can still smell the leather. No miles on the clock. Only driven to church on Sundays.”

Donations are just that. If he’s wanting a refund it suggests his interpretation of “donation” is actually “fee for service”.

Sounds like cancelling his citizenship was the right move.

Kishor is wrong about “cancelling his citizenship.” Huang was not a citizen. His visa was cancelled and his application for citizenship was rejected.

No Rais, this is exactly what the article says:

“Recently, his application for citizenship was rejected and permanent residency cancelled “

Yes, thanks for pointing that out. I must have skated past that to where it says, “Incensed by what he calls a “grotesquely unfair” decision to cancel his citizenship, Huang wants his money back.”

It’s just another example of general poor grammar and lack of understanding of syntax in Crikey.
Simple parsing would help but that’s expecting too much of modern ‘writing’ – too easy to shift slabs of text about after writing rather than thinking it out in the fist instance.

Under Australian Consumer Law and especially after the Banking Royal Commission, where not getting service where a fee has been payed is considered bad form, surely he has a case.
Give the man his money back.

old greybearded one
Reply to  124C4U

Only if he was offering as a bribe. Otherwise he is not entitled to any result. That is a donation.

124C4U
Reply to  old greybearded one

I’m with Laughing Bubba on this one.
He seems to have expected something in return even if only friendship ( har har). He didn’t get it ,give him his ” donation ” back.

Let’s face facts, money talks. Whether it’s got Ben Franklin’s face on it or Mao Zedongs. While donations to political parties are permitted attempts to buy influence will continue. And the more money you have, the more influence you can buy. We either publicly fund politics or we allow the rich to do so. Unfortunately I cannot see a safe middle ground.

ALP, LIB or Greens MP’s do not represent their electorates or the citizens of Australia as they should be required too.
Potential solution- a independent crime and corruption investigative body with the ability to delve retrospectively and root out any deep, ongoing influence not in the interests of Australia and its citizens.
This is impossible to establish with the current parliament dominated by major parties who have made billions from selling influence and structuring legislation favorable to persons / entities other than Australia and its citizens as a whole.

A plebiscite proposing
i) Ban all political partys from contesting the next two elections.
ii) Political donations must be made to the AEC for distribution equitably after the expense of elections is covered.
iii) The formation of a politically independent Australian crime and corruption commission.

The Australian political structure is currently corrupt and non-representative of its citizens, change might be chaotic but the current situation is anyway, and also corrupt.

Excellent suggestion. You could either have a single AEC campaigning fund with a AEC to distribute the proceeds of donations according to a formula, or donors could specify which party or candidate their donation is for with the AEC to pass the money on to the intended recipients without identifying the donors. In that way donors not intending a “fee for service” would be able to support democracy while those seeking a return for their money, in other words offering a bribe, would be blocked.
I suspect there would be fewer donations.

Lower donations has a side benefit of leveling the playing field as pollies are less reliant on the wide reaching reality distortion field called the media and *gasp* might have to put forward policies and argue them logically.

Me four, excellent idea.
Add that to my constantly suggested fix – require accounting of ALL electioneering expenses (ie not just during campaigns) with valid receipts showing time & name of donor.
Any outlays without documented sources would be, ipso facto, corrupt.