Good morning, early birds. Labor is seeking an inquiry into the potential leaking of the banking royal commission report, and Home Affairs comes out swinging against Kerryn Phelps' medical evacuation bill. It's the news you need to know, with Chris Woods.

Labor has called for a parliamentary inquiry into the potential leaking of significant information about the royal commission’s final report, following news that bank stocks surged immediately prior to the public release on Monday.

The Guardian reports that Labor’s spokeswoman on financial services Clare O’Neil has cited “concerning allegations” about the Hayne report, which lead to an even greater spike in bank shares after it went public, in a probe request to the prime minister’s department. Labor has previously called to extend parliamentary sitting days to legislate for Kenneth Hayne’s 76 recommendations. Leader of the house Christopher Pyne has dismissed the proposal but it is already gathering steam with the crossbench.

A Home Affairs briefing based on ASIO and Australian Border Force advice has warned that Kerryn Phelps’ medivac proposal could undermine the “third pillar” of the federal government’s border control policy: the indefinite offshore detention of people seeking asylum.>

According to The Australian ($), the classified security briefing advises that Phelps’ bill could require onshore detention facilities re-opened for people who were unable to be subject to a timely threat assessment or are deemed unsafe to live in the community. >The briefing, reportedly prepared for government negotiations with crossbencher Rebekha Sharkie, comes after the second government leak in as many days, with The Daily Telegraph ($) reporting that almost 900 medical transferees have remained in Australia due to legal intervention.>

NAB (ALLEGEDLY) DOES IT AGAIN

A former chief of staff to embattled NAB chief executive Andrew Thorburn allegedly defrauded more than $500,000 of the bank’s money in order to fund a first-class, multi-destination family holiday; just one part of a suspected multi-million dollar rort.

With Thorburn already under pressure to resign post-Hayne grilling, The Age and SMH report that authorities are investigating whether the corporate and spending culture in NAB’s top office had anything to do with Rosemary Rogers’ alleged rort.

He had just booked out an entire restaurant to have dinner with me. I was vain. Arrogant. Thought I was special.

The former Labor senator goes for gusto in his Huang Xiangmo tell all ($).

“Financial services royal commissioner Kenneth Hayne has struggled with, but ultimately failed to address, the systemic problems of Australia’s financial industry. His recommendations for reform — common sense in many areas, timid and tepid in others — won’t address the deep-seated faults that drive the industry-wide misbehaviour he uncovered.”

“Labor’s plan to scrap cash refunds for franking credits is shaping up as a battleground election issue, with the Coalition desperate to win over older voters by raising the spectre of a ‘retirement tax’. The ALP’s policy, which Bill Shorten believes will save the government nearly $60 billion over a 10-year period, has been the subject of considerable media scrutiny, and more recently, an inquiry by a parliamentary committee. But while such inquiries are generally non-partisan, the Standing Committee on Economics’ probe into Labor’s policy seems to be anything but.”

Look to Spain to solve the Murray-Darling issue

“Fish are dying and South Australia is furious as Australia’s river management systems fail us yet again. How do we figure out how to manage the Murray Darling Basin?  There are three main schools of thought. One is market forces — let water be traded like a commodity. The second is to use the force of the law: ban cotton farming, some say; ban water trading, say others. The third school of thought is to learn from systems that have worked elsewhere, however theoretically impure they may be.”

Recovery starts as fires continue to rage in Tasmania ($)

$50 million JM Kelly collapse: What the Government knew before it all fell apart ($)

For the sake of trust in politics Tim Wilson must go – the problem is he can’t see that — Katharine Murphy (The Guardian): “It’s that mindset that leads you to a place where you can establish an ‘inquiry’ into a ‘retirement tax’ (that isn’t a tax), funded by the taxpayer (thanks for that guys), and think it’s fine for the chairman of the relevant parliamentary committee (in this case Tim Wilson) to authorise what is clearly an accompanying, partisan campaign website (endorsed by him in his committee capacity) in order to better funnel outrage to the main event.”

Recession-free era could turn into something quite unpleasant — Stephen Bartholomeusz (Sydney Morning Herald): “Philip Lowe’s address to the National Press Club underscores how finely-balanced our current economic circumstances appear to be. So finely-balanced, in fact, that the Reserve Bank governor assesses the probabilities of either an increase or decrease in the cash rate as evenly balanced. Previously the central bank had considered it more likely the next move would be an increase.” 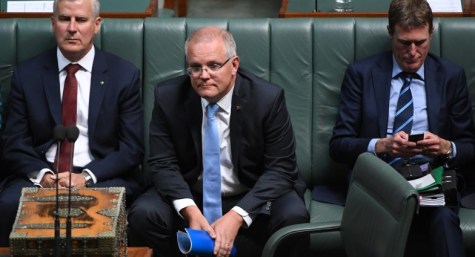 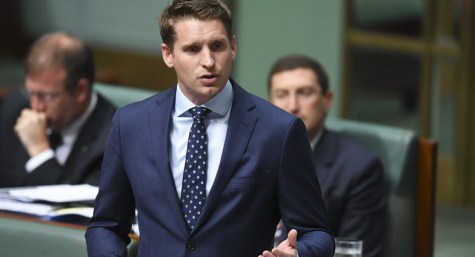