With the latest moves on Brexit in the House of Commons, absurdity and governance have fused completely.

‘When I use a word,’ Humpty Dumpty said, in a rather scornful tone, ‘it means just what I choose it to mean.’

Lewis Carroll, Through the Looking-Glass

Of the many arguments for the meaning of Alice’s Adventures in Wonderland — aside from a bit of early pill-testing by Lewis Carroll — is that it marked a reaction to the gradual bureaucratisation and rationalisation of Britain, as it became an industrial empire. The more rational it tried to be, the sillier things got.

With the latest moves on Brexit in the House of Commons, absurdity and governance have fused completely. Humpty has the upper hand now. The house has just risen after many hours considering a series of largely meaningless amendments to the European Union (Withdrawal) Act. All of them sought in some way to make a “no-deal” crash-out on March 29 impossible. None of them had the real power to do so. But it didn’t matter because parliament rejected them all, save for the final one, the Brady amendment, which in its fusion of arrogance, blitheness and futility, would appear to be the distilled essence, the “drink me” shrinking potion of this whole amazing story.

The greatest hopes were placed on the Cooper-Boles amendment, piloted by Labour’s Yvette Cooper (a Gordon Brown-ista from years back) and Tory Nick Boles. This sought to block the prime minister from executing the article 50 withdrawal from the EU on March 29, if parliament had been unable to ratify a deal with the EU. The parliament has no absolute power to thus bind the PM in her executive role, but the theory was that it would make it very difficult for the PM to override an expression of parliamentary will.

But even were this to have been effective — the rare subjunctive mood gets a big workout in discussing Brexit (ironically this all would be a lot easier to talk about in French) — there would will have been* no compulsion that the EU were would to have** agreed to such an extension. The extenders simply hope that the EU sees a chance that, given an extension, the UK can be diverted from leaving.

The problem for such amendment proponents — and the voting-down of Cooper-Boles appears to have come as a surprise — is that both hardcore Leavers and Remainers have no incentive to vote for modified Leave arrangements, so a centre majority can’t be found. Aside from Cooper-Boles, there was Spelman-Dromey, and Reeves; all different versions of expression of a house will that the UK not execute a “no-deal” leave on March 29.

What got up was the booby prize at the coconut shy: the Brady amendment, by a Tory grandee, “rejecting” the “backstop” arrangements. The “backstop” is the specific agreement that, post-Leave, should no UK-EU free trade agreement be negotiated in good time, Northern Ireland will continue to be treated as part of the EU for customs purposes, thus avoiding a “hard border” on the island of Ireland.

The “backstop” thus runs a border through the “U”K, and you can see why it drives Leavers wild: having voted to “regain” control — sorry, but the quotes are necessary; all these words have long since slipped any relationship to things — they find they have managed to shatter their own sovereignty.

The Brady amendment got through on a coalition of delusional Great Britainists who think they can dictate terms to “arrogant” jabbering foreigners, and those who know it makes no difference at all. It attracted widespread ridicule as soon as it went through, with folk on Twitter naming themselves King of Portugal, captain of Chelsea, etc.

The vote that took down Cooper-Boles was narrow; a mere dozen votes or so, with Labour voting it up — with 16 rebels — and the Leave Tories voting it down. But this simply shows that the functional split between executive and parliament is now total. The May government simply does not have control of parliament any longer.

Despite that, shell-shattered, running in all directions at once, May gave upbeat remarks: the Brady amendment vote signified that a majority of MPs support a deal, with a changed backstop; the EU promptly said there would be no change to the backstop.

Words mean what we want them to mean. Until March 29, unless they can pull a white rabbit out of a hat.

O has thou slain the cruel Backstop?

Come to my arms, my EEAmish*** bouy

O hapless May! Queues at Calais!

He chortled in his joy

*yes this is correct; it so happens that I may not care to get letters about this

**that one is my own innovation 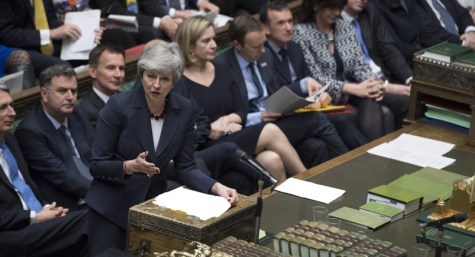 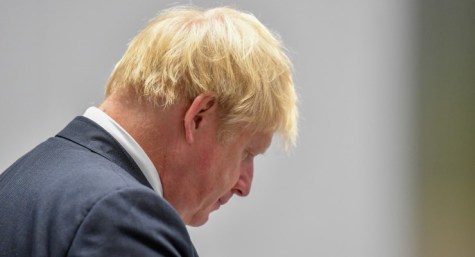 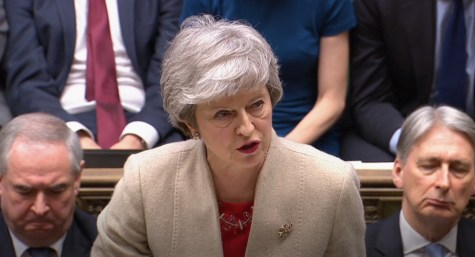 “a lot easier to talk about in French”
Far easier, and it should have been compulsory.
(Oh would that it had been.)

Surely by now the Brits are asking themselves what the question was if Brexit is the answer. New referendum? New parliament at the least.

Meantime David Cameron noses his cognac & reaches for a Romeo y Julieta. There is no justice.

Maybe the god’s have cleaved his tongue to the roof of his mouth and stolen his ability to whistle as a small punishment.

“The problem for such amendment proponents … is that both hardcore Leavers and Remainers have no incentive to vote for modified Leave arrangements, so a centre majority can’t be found.” That is a problem, but I don’t think that’s really the problem for Cooper-Boles. As far as I can see the strong Remainers all voted for it; the problem is that party discipline is still pretty strong, and the Tories whipped against it. I think there is a centre majority of sorts, it’s just that most of the Tory component of it is sticking with May for the time being. Things might look different in the second half of March.

They wont pull a rabbit out of a hat as they would be flat chat pulling a hair out of their arse.

Still fascinating, and Brexit gets more fascinating every day in a morbid, distant, kind of way.

What I love about the English is that they are spluttering on as if they hold all these smashing bargaining chips hidden away that nobody but them can discern. They may be keeping them ready for the big reveal to the 27 Member countries on the 29th March like some Wes Anderson movie moment. Or, possibly M. Night Shyamalan – whichever is more apt?

Everybody else in the world has known for at least two years now that this is going to end very badly. That is, except for the Tories who have convinced themselves that having no plan is actually a very cunning plan.