"While the marches are sometimes referred to as 'change the date' rallies, this is not accurate. These rallies are about changing the discourse."

The blistering heat of Friday meant the air was still warm when we rose and met at 5am in the pre-dawn darkness of Melbourne. Feeling anxious about the day ahead, I joined with others and we made our way through the dark and into the city. It was Saturday January 26, 2019 and the first formal dawn service for the First Nations men, women, and children killed in the Frontier Wars and massacres was about to take place. 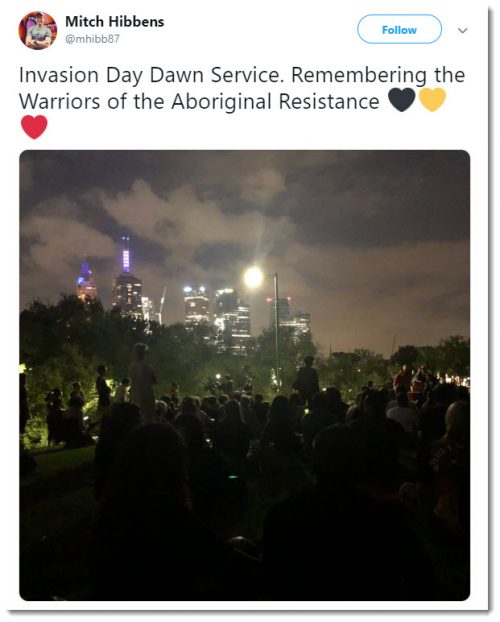 Organised by proud Gunnai-Gunditjmara woman and former politician Lidia Thorpe, the service was held at a known massacre burial site in the city of Melbourne. It was the same place where, later that day, the city would be celebrating Australia Day; a nation built both literally and metaphorically upon those very massacres. Organisers of the dawn service had worked tirelessly, including attending the site ahead of the event, cleaning smashed bottles off of the memorial stone. The symbolism of Indigenous peoples being the ones to clean the mess of those who party on our graves was not lost on the crowd.

In the pre-dawn darkness an estimated 1000 people came together and as the sun rose we were led to quietly engage in ceremony; cleansing our hands in ochre, our spirits in the smoke, joining with intention, and eventually burying the fire as those we honoured had been buried. As we did so, First Peoples rose to read out the documented Victorian massacres, and it was acknowledged that these were merely the many massacres that were formally recorded. There were undoubtedly more.

This event was led by strong Aboriginal women, women who stand as leaders of families, and communities. As an Aboriginal woman myself it was a deep privilege to attend and have the opportunity to stand and honour the warriors of the Aboriginal resistance, whose lives were taken while they fought to defend their land, families, and people. It was a sombre and deeply moving event, and one I hope will not be the last of its kind.

With the rising of the sun and conclusion of the service the day began to heat up. The crowd dispersed, and we made our way out of the park and to Parliament House for the Invasion Day rally, an event primarily organised by the Warriors of Aboriginal Resistance.

January 26 has been a formal day of mourning and protest for First People since 1938. Rallies now take place in all capital cities, and have grown with each passing year. In Melbourne I joined a crowd which exceeded 80,000 and was proud to hear that back home an estimated 50,000 were rallying in Sydney, with many more around the continent at various sites. These numbers only reflect those who are able-bodied, and not restricted by carer responsibilities, scheduling, health issues and so on.

In Melbourne, police restricted us from gathering on the steps of Parliament House and, at times, progressing. Instead we congregated on the footpath until the crowd swelled, eventually filling out across the road and tram tracks. The crowd grew despite the increasing temperatures, spreading far beyond my line of sight.

While the marches are sometimes referred to as “change the date” rallies, this is not accurate. These rallies are about changing the discourse, influencing the structural violence and oppression our people live under daily, and pushing for truth telling, self-determination, and acknowledgement of sovereignty through acts such as treaty. A collective of people joining together around the country are seeking to change the nation, not merely a date on which it is celebrated.

We chanted, with powerful placards and banners held and shared among the crowd, holding signs with the faces of Aboriginal and Torres Strait Islander men and women who have had their lives taken while in police presence or custody.

Speakers, including Lidia Thorpe, addressed the growing crowd of thousands, denouncing the structural and physical violence against First People, and calling upon the crowd to remember the power of turning up not just at rallies, but each and every day in this battle for rights and truth telling. Kurnai/Gunai, Gunditjmara, Wiradjuri and Yorta Yorta writer Nayuka Gorrie opened their message with “unlike colonisation, I will keep this short and sweet” and in many ways this kind of humour imbued with so much truth captured the energy of the rallies. People are angry, but there is hope; oppression is active, so the response is to collectively be pro-active. 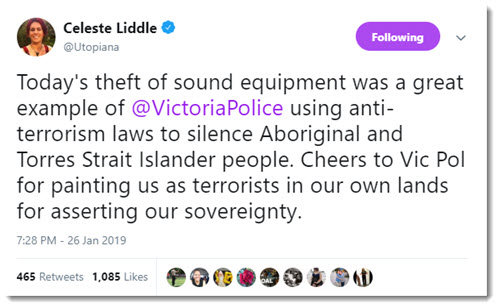 Microphones were confiscated by Victoria Police around 1pm, leaving organisers’ ability to address the crowds limited, but the energy of the large crowd continued to be one of empowerment and hope. Marching from Parliament House down to Flinders Street Station, the crowd was a mass of Indigenous people, allies, and supporters who were turning up to make it clear that being heard on these critical issues is no longer optional. Together, we are making history, and working together to create a stronger future for all of us who call this land home.

To me I think the answer is fairly straightforward. Make Australia a republic and have Australia day as remembrance of this day (but not 26th Jan). Have in the Australian Constitution recognition that Aboriginal peoples were first inhabitants. Change the flag to the Eureka stockade flag with the Aboriginal flag in the top right corner instead of the union jack.

Why not use the Aboriginal flag?
If it has been chosen by the First People to represent the country then stick with it.
There is no need to try and represent every nationality that has arrived in Australia since the “First Fleet’.
The flag as it stands is representative of Australia in its colours, is simple to manufacture ( complicated flags cost a lot to make), and distinct in appearance.

If Aboriginal people themselves are properly consulted and agreed to gift, or lend, the flag to the whole nation it could be done. A condition for that would need to be proper Constitutional recognition of the First Nations.

Agree with Rais. It is a beautiful flag, if allowed to use it as the only national flag. To coincide with the Makarata Declaration being honoured.

I think that a flag that combines the Aboriginal Flag with the pre-existing Southern Cross could potentially look very beautiful.

Thank you for this, though gratitude is not the point- respect is. A massacre site! Horror. it is like having fun in a Polish forest, on a site where hundreds of Jews and/or partisans were shot dead.
What can a person do other than stay away ? I was not near a protest.

There is no need to call for Changing the Day. If you can’t change the date, seize the day and make it mean what it really means. If Invasion Day or Survival Day observances continue to develop like this the “conservatives” will change it themselves to remove the day of protest.

I would like to know under what law the Victoria Police took away the microphones.
Does anyone know? Until we sort out these little things, nothing will change.