Ever wondered what happened to neighbourhood-wide hard rubbish collection? We did some sleuthing.

One man’s trash is another man’s treasure, so the saying goes. But, really, it depends on the suburb.

I’ve had an amazing strike-rate of finding gold — among soiled mattresses and cracked hoses begging to be fashioned into bongs by teens — while fossicking through my neighbours’ discarded hard rubbish. I have vivid childhood memories of racing with mates on our bikes to beat dilapidated Commodores towing illegal trailers to rummage through freshly-laid piles of kerbside crud.

According to urban legend, the ritzy area of Burnside was Adelaide’s holy grail for discovering unwanted gems like gaming consoles, expensive bikes and designer furniture ahead of its annual neighbourhood-wide hard rubbish collection. But in 2015, the council voted to scrap the scheduled service in favour of an on-demand collection system.

The move was designed to improve recycling rates, protect the environment by reducing illegal dumping, and generally avoid having entire suburbs resemble the trash compactor scene from Star Wars. But Burnside wasn’t the only council laying waste to the old system.

Confused by the fact I hadn’t seen an entire neighbourhood in the joyous throes of hard rubbish collection for ages, I did some sleuthing. It turns out no metropolitan Adelaide councils schedule hard rubbish collection anymore; it has instead been replaced by the more efficient on-demand service residents can access up to three times a year. I must’ve missed the obituary.

And a scan of interstate council websites hints that scheduled neighbourhood-wide collection might be a threatened species nationwide.

When Victoria’s Knox Council made the switch in 2014 there was fury from some in the community who said the new system was filling kerbs with junk year-round. A Facebook page documenting the council area’s trash piles sprang up and the local paper had a field day charting the on-demand system’s teething issues, which included one absolute unit’s impressive 35-metre junk pile. But since late 2016 the news stories have dried up.

The council’s review of the new service, a year after it commenced, conceded there may be small piles of junk in neighbourhoods at any time, compared with the mother lodes seen only around its previous biannual collections. But it also noted there was a “significant reduction in disposal costs for at-call service due to less material being placed out for collection and improved collection methodology resulting in more being recycled”.

The benefits — that it saves money and results in more stuff being recycled — are echoed in council reports and reviews around the country.

Other councils’ residents have also complained about the hazards scheduled collections pose to the visually-impaired and elderly, when footpaths can become completely blocked off with trash for weeks.

As much as I pine for the treasure-filled days of my youth, the scheduled collections have become impossible to defend. But still, debate rages on. Victoria’s Brimbank Council is one of the latest making the switch. Late last year a councillor told the local paper the decision was “highly divisive”, with the community split 50:50 on who prefers on-demand versus annual collection.

In a country that has made an art form of going absolutely apeshit over even the most trivial of issues (think supermarket plastic bags), there’ll be plenty more community newspaper ink spilled over hard rubbish around Australia, as more councils junk their scheduled collections.

One story I haven’t seen, however, is a tribute to a national (trash and) treasure, celebrating the glory days when you could fill your shelves with admittedly mostly useless paraphernalia you’d inevitably end up returning to the kerb the following year.

So, this summer I’m pouring one out (of a secondhand Looney Tunes KFC mug) for our fallen annual kerbside hard rubbish collections. And if you’ve still got it in your ‘hood, Godspeed. Enjoy it while it lasts. 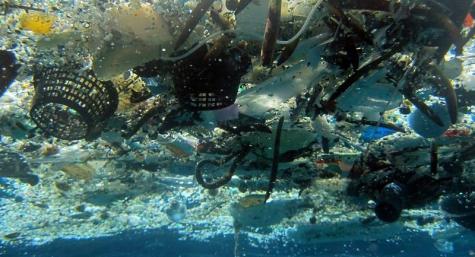 Call for action on plastics in waterways

On demand all well and good. Not so good in high density/high rental suburbs.

On demand all well and good. Not so good in high density/high rental suburbs.

At Mum and dad’s in Melbourne, householders are now obliged to put a notice with their (on-demand) hard rubbish stating that is illegal to take things from the pile. This, to me, is more egregious than changed to the scheduling of the collection. Why can’t I let anybody take the stuff I don’t want any more? Aren’t we trying to encourage re-use? If someone grabs something they like, then surely it’s a win-win, including for the council which has less rubbish to deal with?

As a long term Bondi resident, our household – and several others – was entirely furnished by the hard dumps from nearby Vaucluse.
We realised fings was a’changing when in the early 90s the quality began to decline, with chipboard furniture & chinese electronics replacing the real olde gold.
Happy daze, as were.