Josh Frydenberg thinks lauding the cause of neoliberalism will resonate with voters — despite his own government turning its back on free markets.

This year, with an election around the corner, there’s been none of the traditional late January official commencements to the political year. Instead, both sides are straight into campaign mode and unlikely to deviate from that until 6pm on polling night. That’s perhaps the reason why what was billed as a “major speech” by Treasurer Josh Frydenberg yesterday got little attention beyond what was dropped to newspaper journalists ahead of time. Or it could be that people are so convinced of a Labor win that Frydenberg could announce the nationalisation of the banks and still struggle to get a headline.

Frydenberg has the makings of a good treasurer and is rightly touted as a potential future leader, but has failed to make the portfolio his own in the limited time he’s been there, and yesterday’s “major speech” showed that there is little awareness in his office, or in senior Treasury ranks, of just how radically the political environment for economic thinking has shifted in the last three years. The speech would have been a workmanlike effort if delivered by Joe Hockey in 2014. Early in 2019, it was remarkably out of sync with political reality.

In summary, Frydenberg argued the Coalition and Labor had both created Australia’s long economic boom with economic reform but now Labor had lost its way in favour of trying to tax its way to prosperity, class warfare and “false prophets” whereas the Coalition “has continued to carry the baton of economic reform” and would keep the faith with the “invisible hand of capitalism”.

The usual furphies were there. Contra Frydenberg, the Coalition is the party of high taxes; missing from the statistics he reeled off is that tax has grown from 22% of GDP when Labor left office to a whopping 23.6% now and is forecast to get worse. The “free” trade agreements he touted have been demonstrated to have minimal benefits for Australia, and may even harm the economy. And in any event, courtesy of our anti-dumping tariffs and multibillion-dollar defence protectionism, Australia is an increasingly closeted economy, not the open free trader we claim.

But those are mere facts. The rhetoric is what’s important. Given the Turnbull/Morrison governments has embraced radical interventionism, including a proposal for a divestment power wielded by the executive, funding power stations, dictating banking remuneration and telling gas exporters what to do with their products, the penny might have dropped in Frydenberg’s office that continuing to talk as though the age of neoliberalism was in full swing was at odds even with the government’s own policies, let alone broader political reality. Sure, the speech was to the Sydney Institute, where unalloyed neoliberalism might still find favour; perhaps Frydenberg sticks to the party line in such fora, knowing full well it will be a very different story when making decisions in government — neoliberal in the sheets, interventionist on the streets, as it were.

But in the lead up to an election in which much of the electorate is looking for politicians who will commit to making the economy work for them, not elites, it was extraordinarily tone deaf. Expect that “invisible hand of capitalism” line to find its way into Labor advertising. For millions of Australians, the hand of capitalism has indeed been pretty bloody invisible in recent years, and given them nothing.

And on the most prominent example of that, Frydenberg was silent. Wages are virtually absent from the speech, receiving a solitary passing mention that “the pick-up in wages growth remains gradual.” Well, gradual if you’re a public servant or health professional. Many private sector workers are going backwards in real terms. Despite downgrading budget wage forecasts five out of the last six years (and the year they didn’t, 2015-16, the forecast was badly wrong), the government still seems to think there’s no need to address wage stagnation. Not even after the head of the Reserve Bank explicitly identified the issue as an impediment to support for economic reform of the kind that Frydenberg “carries a baton” for.

Only on financial regulation did Frydenberg betray an awareness it was 2019, although diehard interventionists would have been disappointed he appeared (probably correctly) to lean toward better enforcement of existing regulation rather than a suite of new laws to curb the banks. Otherwise, on the economy, it seems the Liberals will enter the coming campaign all set to fight the 2013 election. 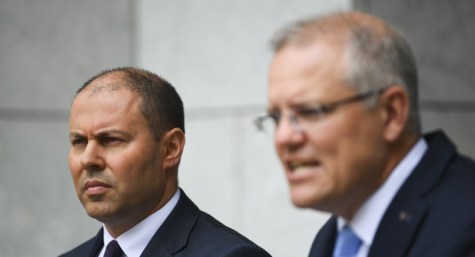 Roosevelt in the streets, Trump in the sheets? Frydenberg lauds multilateralism

Frydenberg’s economic strategy: you’re on your own 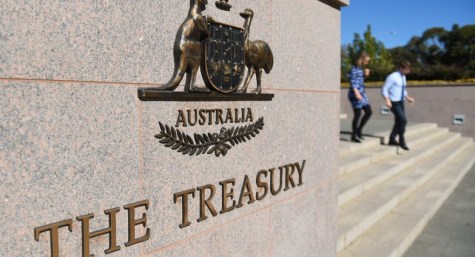 Oh yawn, more of Bernie’s tiresome Hagiography in relation to Fraudenberg. The bloke is just another total lightweight who is far too reliant on external forces to “repair the economy”. Heck, he even manages to make Costello look like a hard working Treasurer.

“Fraudberg Another Rising Star”?
Joshed us over how a storm that brought down the delivery system of SA power was really down to the SA Labor government’s “over-reliance on renewables”, how we’re going to meet our Paris committments in a canter, our a coal-powered future, how great the NEG was, then wasn’t …… now this?

He spend his time in the sheets with an invisible hand? Chilling.

Thomas Piketty, in his massively successful book published in 2012, ‘Capital in the 21st Century’ articulated the best researched analysis of the effects of Capitalism since Marx; ie without effective wealth transfers effected by good government policy, the rich get richer and the poor poorer. Piketty completely destroys idiot neo-liberal ideology. The mainstream economics media has been recently reporting that 90% of the growth in wealth and income has gone to the top 1% over that last decade.

Why then have we never heard a politician refer to Piketty? Because ideology, even the now utterly confused ideology of the Liberal Party, is the only currency of politics and erudite analysis is simply inconvenient commentary on ideology that must not be mentioned lest it be revealed that all ideology is bunk.

Labor has a golden opportunity to dive itself of neo-liberal legacy, adopted entusastically by Labor during the Hawke-Keating period and never repudiated, and embark on a bold new direction of fairness and equity. But Labor has chosen to not rock the boat too much, when we need radical change.

But I do recognise that democracy is, in essence, a political process to ensure sub-optimal outcomes.

Ng GJB
Reply to  Been Around

It seems unlikely that either major political party could ever divorce themselves from the neo-liberal agenda, they simply are not capable of any creativity in thought or action. Besides it is much easier to keep your career trajectory on track if you comply to what your future corporate employers might wish of you.

heavylambs
Reply to  Been Around

Frydenburg is a glove-puppet.
Piketty’s work is for real people with some independence of thought.

Presumably “…Labor has a golden opportunity to dive itself of neo-liberal legacy…” was meant to be DIVEST the idiocies of PJK being B/S bombed by Treasury wonks?

If he has the makings of a good treasurer one would expect he would be aware of just how radically the political environment for economic thinking has shifted in the last three years.

You’ve blown up your own argument.

Sydney or the Bush
Reply to  lloydois

“But those are mere facts. The rhetoric is what’s important.”