From sex scandals and in-fighting to accusations of environmental mismanagement, the Nationals have more than a few crises to sort out.

It’s an indictment of the state Australian politics when limiting our “Crisis Watch” format to just the major parties seems totally unfair. This is particularly true of the Liberals’ Coalition partner, the National Party, which punches so routinely above its weight in terms of minor-party scandal-generation that we felt it deserved a special look.

The Nats are plagued by scandal, vested with bullies and riddled with incompetence. The one thing they were supposed to be good at were looking after farmers and they have failed at that.

Who delivered that scorching assessment? A senior Labor figure, or one of the more bellicose Greens? Nope, that was Wagga Liberal branch president Colin Taggart, who has “declared war” on the National Party in the state seat of Wagga — which, incidentally, overlaps a great deal with Nationals leader Michael McCormack’s own federal seat. Taggart is organising with a new anti-Nationals campaigning group, Anyone But Nats, to help defeat the Coalition partner at the NSW election. The seeming impunity of Nationals members is clearly starting to grate within the Liberal Party.

Anyone But Nats are not leaving it there — they are planing to support candidates in several Nationals-held seats and will hold a series of community forums at regional centres in key electorates.

A focus of Anyone but Nats and Taggart has been the colossal mismanagement of the Murray-Darling Basin Plan. This mismanagement stretches back years, but has hit a horror show peak in recent weeks. One million native fish have died in the basin, and the stomach-churning sight of scores of dead and rotting fish floating to the banks of the Darling river system provide a potent and haunting visual metaphor for this rank policy failure.

Last year, having been engulfed by his “sugar daddy/James Bond” sex scandal — the second such scandal to afflict a Nationals MP that year — Andrew Broad announced he would not contest the next election, leaving the Nats, who have no obvious replacement, nervous about retaining his safe seat of Mallee. Peta Credlin has been touted as a possible candidate for the seat, and given the circumstances, a high-profile conservative woman would be a fraught prospect for the Nats.

Oakeshott to the heart

Another high-profile candidate that could cause the Nats strife in 2019 is Rob Oakeshott. Six years after his retirement from politics, the former independent is running again in the safe nationals seat of Cowper. Quite apart from his experience and name recognition, in 2016 he ran what he called a “crazy three-week campaign”, gained 45.4% of the two-party preferred vote and inflicted an 8.1% swing away from Nat Luke Hartsuyker.

Sickening footage of sheep dying on an Emanuel Exports ship emerged last year, calling attention to yet another area that the Nationals have responsibility for, and have unforgivably screwed up. Even stories that paint animal activists in a negative light, like this morning’s report that money was allegedly offered to whistleblowers for incriminating footage, keeps the original cruelty and suffering in people’s minds.

The Barnaby Joyce of it all

All of these issues — disastrous mismanagement of the agricultural portfolio, fights with the Liberal Party, fights with high profile independents, and insensible horniness — have one common thread: Barnaby Joyce, the man who more or less necessitated Crikey’s Crisis Watch specials in the first place.

His demotion to the backbench after a sex scandal early last year has not stopped him causing trouble. Earlier this month, it was revealed he’d charged taxpayers $6000 to attend — with new partner Vikki Campion — a forum supporting live sheep exports in Western Australia, and he’s recently been forced to deny allegations that it’s corruption as much as drought that has led to the current Murray-Darling crisis.

But it’s also failed to stop speculation about his return to a position of leadership in the party. And as long as that remains even a faint possibility, the sense of calamity surrounding the Nats is unlikely to dissipate. 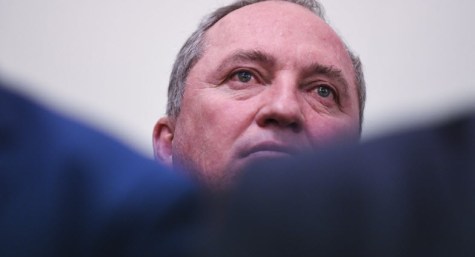 Mungo: We are witnessing the last days of the Nationals 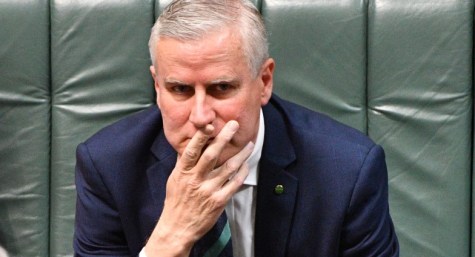 the thuggery of the national party is a national disgrace, although the liberal party is pretty handy when it comes to bully boy tactics at the polling booths on election day the nats go even further, and intimidation of party whistle blowers or anybody that dares complain of dirty tactics or corrupt behaviour is quickly bought to heel and silenced and thats why a federal ICAC is a must for an incoming labor government, to weed out the corruption and thugs from Australian politics before we become another corrupt and dysfunctional copy of the rotten U.S political scene.

The outback churchies will still vote for them; Labor and The Greens are anarchic atheists, hell bent on submitting to the ‘yellow peril’. But still, without National numbers, the Liberals are very much a minor party – it should be interesting.

Yes that is so, but most of the outback folks I know don’t fit that mould. Their scontinued existence baffles me and I live in a safe Nats seat.

The Nats like to describe Barnaby as good retail politician. Retailing what?, might be a good question to ask them. They seem to have switched from being the party representing farmers to one who pushes coal mines, big business & are total climate change sceptics. Barnaby was asked to help Liverpool Plains farmers with the Shenhuwa Mt Watermark coal mine near Gunnedah NSW., a couple of years ago, but Barnaby ran a mile away saying it was all a NSW state matter.

Now they have Michael McCormack as leader & to be be quite frank he is about as useful as a thimble full of lukewarm water & he needs to be dumped as well. The Nats some up with truck loads of excuses when the proverbial hits the fan, but seem to offer absolutely no solutions to any problems.

The Nats like to describe Barnaby as good retail politician. Retailing what? Anything from the Reject Shop.

I heard Michael McCormack on ABC News Radio today responding to the Murray-Darling tragedy. What a complete load of disingenuous, weasel word, bullshit blame-shifting crap that was. You can probably find it on the website if you wish to be as offended and angry as I was.
And please, the Nats and Libs, at both federal and NSW level, have “mismanaged” nothing. The outcomes we are now seeing are exactly as planned, in favour of the party’s big donors.

Actually it was the Abbottocity who bestowed that appellation on the Rootbeater coz he sells the dimwits shit by telling them it’s sugar and they go “yummy!”.

oh goody, my first ModBot of the new year.

The only way the voters of the bush and the regions are going to get real and active representatives is to vote “Anyone but the Nationals “. It is no wonder that the Nats represent some of the most disadvantaged electorates in the Nation as their mates the Liberals spend billions tearing down Stadiums and building new ones so that they can entertain their friends in style at the Grand finals while the people of the bush die from lack of basic health care. Wake up country people you have nothing to lose by lack of services. Vote Anyone but the Nats

You are absolutely correct and I have been saying it for decades. Bit somehow the cat comes back. I have voted anyone but Nats for some time, ever since a crook named Wal Murray was involved in some dirty work for a feedlot company in the 1980s. HE was also the minister responsible for the massive overallocation of water in the Barwon and its tributaries.

The National Party is rotten to the core. The fellow travellers and their nincompoop supporters will keep voting for them to protect what they see as their rights and prerogatives. Joyce has been very good at servicing and shoring up this base. His best seller, Weatherboard and Iron, his pitch to them that he’s really on their side sums up his cynicism and hypocrisy. Watch him get reelected.