A guide to the constant hot button issue of ecstasy, outside the culture wars.

If the headlines are anything to go by, Australia is in the grips of a drug epidemic, with pill overdoses killing off our kids at an alarming rate. You could set your watch based on reactions to the latest suspected overdose: police double down on “say no to drugs” messaging while NSW Premier Gladys Berejiklian buries her head even further in the sand and continues to rule out pill testing, even as the young victims’ family, the majority of voters, her own MPs and Sunrise’s David Koch turn against her.

But while the endless debate about MDMA overdoses inflames passions, and drives newspaper headlines, it tells a far from complete story about drug deaths in Australia. Crikey breaks down the facts and figures on which drugs are the most dangerous.

What drugs are we taking?

Which drugs are actually killing us? 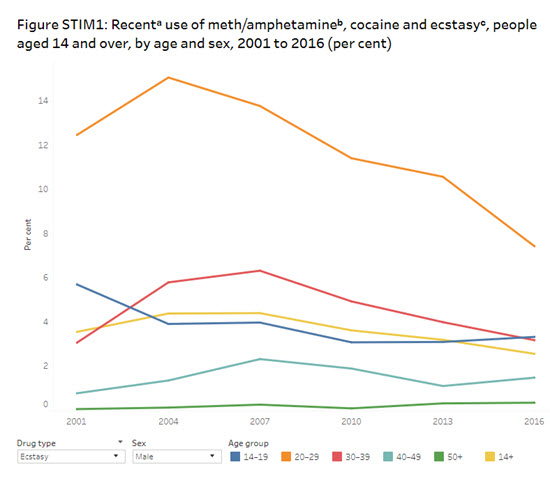 How could the media be better reporting on drug deaths? Send your thoughts to [email protected]

At last, some facts to put the current panic into context. Thanks.

I think it unlikely that MDMA overdose is lethal – unless some one freaked by a drug dog approaching swallows a commercial consignment.
Much more likely is that the so-called E tab was something else.
Good to see the over 60s are still toking.

Meanwhile if any of these unfortunate youngsters had died in a car accident on the way to these festivals (a higher probability event) there wouldn’t have been this hysterical reporting on their deaths ditto for drowning versus shark attacks! The media definitely has a role to play in getting balance and sense back into the discussion around drug taking!

Harm minimisation is the only effective objective.. at the moment thats pill testing..

No, legalisation & regulation is the only sane & safe option.
Which is why it will not be contemplated by the authorities as they have too much ‘sunk political capital’ in the current idiocy of prohibition and too much money is made from illegality, from the suppliers to the law enforcement cartel, not to mention dodgy rehab and supply of the truly dangerous, highly addictive and artificially expensive – extortionate – piece of Methadone.

… as well as “the price of Methadone”.