The news outlet's focus on "African" Australians hasn't let up, even after an editorial calling for an end racial division.

Just one week after The Australian published an editorial calling for Australians “to be vigilant about those who seek to divide their fellow Australians on racial lines”, the paper has been reported to the Australian Press Council for placing unnecessary emphasis on race in a news story.

In the news article, the first sentence described the victims of a serious car crash as “six youths of African appearance” — a detail not expanded on or relevant to the otherwise straight police report that described the crash and the injuries, ages and condition of those involved. The driver of the other car was described only as “a Parkdale man in his 40s”; no reference was made to his skin colour, race, ethnicity or physical characteristics.

The story was also tweeted (where it is still published) out to The Australian’s followers, with that first paragraph in the main body of the tweet. 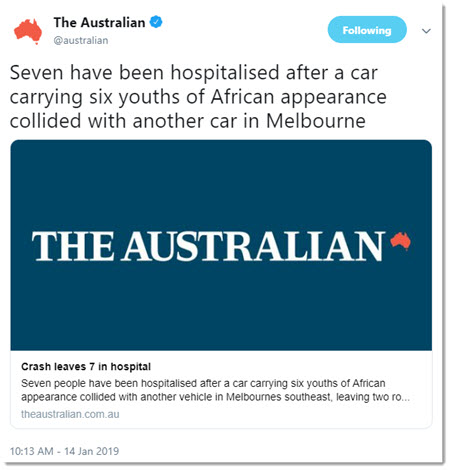 The Australian Press Council has received at least one complaint about the article, and there has also been significant backlash on social media. The second standard of the MEAA journalist code of ethics is to “not place unnecessary emphasis on personal characteristics”, which includes race and ethnicity.

The Australian‘s editorial from January 7, in response to far-right protests in Melbourne, was concerned with similar themes. The paper warned about the dangers of “those who preach fear and hate”, and was apparently most perturbed with racist rhetoric that had moved on from anti-Islam to anti-Semitism.

It called on all Australians to stand against white supremacist groups and racial hatred:

Australia is, as Scott Morrison says, the most successful migrant country in the world. We have achieved this by showing respect for each other, and for our laws and values. Australians must not allow those who preach fear and hate, and use violence, to become in any way acceptable. Our relative social cohesion and unity as a nation is underscored by tolerance and understanding. It is incumbent upon all Australians to ensure that we keep it this way.

The Australian’s tabloid stablemate the Herald Sun has been one of the strongest media outlets in pushing a law and order agenda in relation to “African gangs” in Melbourne — something Victoria Police has said do not exist. The Oz last year also ran a series of stories about the “crisis” with a special graphic tag in the print editions.

The Australian’s editor-in-chief Chris Dore did not respond to Crikey’s request for comment before deadline.

It’s part of News Corpse-where good journalism goes to die-so why are any of us even remotely surprised?

The irony is that The Oz does contain some good journalism, unlike the rest of the Newscorpse rabble. Unfortunately the good stuff is so compromised by the poison that for many of us it’s not worth buying. I could be a potential reader of the paper and probably several hundred thousand others could be but I’m not prepared to subsidise the poison.

I gave up on The Australian about 10 years ago.

You’re right Rais. It’s the Murdoch agenda that he won’t let go of, even though it’s costing him the viability of his newspapers.

Every issue of “The Australian” indicates the brazen opportunism, vicious aggression, and open, casual lies with which Citizen Murdoch is thus helping to drive our impoverishment. Driving bigotry and social division greatly helps our ruling clique’s success in their looting of us. Not surprisingly, that bloc blocked regulation of a viciously aggressive and deeply anti-social Hard Right media with equal success.

Note in this context that “The Australian” had no 2017 nor 2018 Christmas Message whatever of goodwill to all (or to any), nor was there the slightest retraction of the customary Morning Hate. As for all the rest of the year the message was aggressive bullying, casual smears, indiscriminate hate, snide and smearing remarks, and casual contempt for non-rabid-Right authority figures.

Contrast in any particular matter the servile mainstream media reporting (primarily Murdoch’s duplicity of ideologues at The Australian plus its mainstream media stooges at Their ABC and Fairfax) of the abbott Misgovernment’s most appalling acts – and omissions – with the vilification that Prime Minister Julia Gillard would have suffered had she displayed exactly that behaviour.

Victorian Supreme Court Judge David Harper said in 2011 that sensationalist media reports can encourage criminal behaviour, and that some media outlets used tabloid exaggeration both to make money and ratings and to impose on the courts a fundamentally bad sentencing regime. People are very badly served by sensationalised, exaggerated and extreme media reports and laws that encourage tension, division and distrust.

Although the Victorian election was lost, the theme is too pleasant to be willingly changed.

Is there an advertorial conflict here? ….. I mean “fellow Australians” : as defined by the “Who’s In : Who’s Out” Dog-Whistler’s Gazette that is The Oz?

I’ve often wondered who the targets for the Oz are – it can’t be anyone with half a brain because they would be appalled by the thing.
Is it aspirant arseholes, aping what they imagine to be the betters?