A credit squeeze following the royal commission and wage stagnation are two big risks to the economy. Both ultimately derive from the same source.

The Australian Prudential Regulation Authority’s removal yesterday of its cap on interest-only mortgage lending confirms just how concerned financial regulators are about the big banks’ new-found conservatism in lending, courtesy of the royal commission — especially given reports the Reserve Bank has been urging the banks not to tighten lending too much. Tighter lending when residential construction and investment forecasts are being written down and the global economy is weakening poses a significant threat to the local economy. And all the more so when household consumption forecasts have also been written down due to continuing wage stagnation, into its sixth year without any policy response from the government.

That leaves the economy, which appeared to be gathering strength mid-year, ending the year facing challenges from post-royal commission tighter lending and wage stagnation.

Both are derived from the same source. And the reason why nothing is being done about wage stagnation is the same reason why we ended up having to have a royal commission: large corporations have too much power, and are regulated too poorly.

The banking royal commission could have been avoided if governments had regulated banks and big insurers more aggressively. As late as 2014, the Abbott government was given a clear warning by Mark Bishop and John Williams’ inquiry into the Australian Securities and Investments Commission (ASIC): the banks were out of control, ASIC was utterly under-resourced and captured by the banks. If they’d acted, they could have prevented the need for a royal commission four years later. Instead, Abbott and the Liberals doubled down, ripping even more money out of ASIC and trying to repeal financial advice laws.

That, after all, was how the Liberals operated — take big donations from the banks, accept the politically useful support of financial planners, and work to protect the status quo that was seeing millions of Australians ripped off. In the end, the banks got so greedy and so out of touch with community standards that the Liberals — even some bankers themselves — accepted it was all too much and a royal commission was needed. It’s the story of neoliberalism in a nutshell: the process of deregulation morphs into an ongoing process of handing ever greater power to ever bigger companies who engage in evermore gouging of customers, workers and other businesses, eventually provoking a backlash

If you want to complain about a credit squeeze, go do it to the Liberals, whose mantra was to focus on what they could do for the banks.

A very similar dynamic is playing out on wage stagnation, but we’re at an earlier stage. Wages are stagnant because the power balance between workers and companies has shifted significantly in favour of the latter, and they’re abusing it. It’s not just in limited pay rises that, in many cases, condemn workers to real income falls, but in the epidemic of wages theft that the industrial relations regulator only woke up to 12 months ago, and in the Fair Work Commission that bought the lie that penalty rates should be cut for weekend workers.

As with the banks, the Liberals refuse to even see a problem with wage stagnation. Business, after all, is its support and financial base. It is in the Liberals’ financial interest to overlook wage stagnation — indeed, to cheer it along by demonising unions, encouraging penalty rate cuts and opposing minimum wage rises.

As with the banks, a backlash is coming. The ACTU has been pushing for a return to industry-wide bargaining for a while, to give unions greater leverage in negotiations. At its conference this week, the ALP significantly did not reject it, sparking alarm within business and froth-mouthed editorials from The Australian and the Financial Review. Like the Bourbons, the out-of-touch reactionaries of those outlets have learned nothing and forgotten nothing. They’re the the same writers who railed against a banking royal commission two years ago.

Business is equally out of touch. They continue to publicly fret about how to re-earn the trust of the community, not realising that their incessant war on wages growth serves not merely to undermine consumer demand but to provoke alienation and disaffection in the electorate at large. As even the head of the Reserve Bank has noted, workers won’t be queueing up to support the “economic reform” big business endlessly demands when their incomes are stagnant. 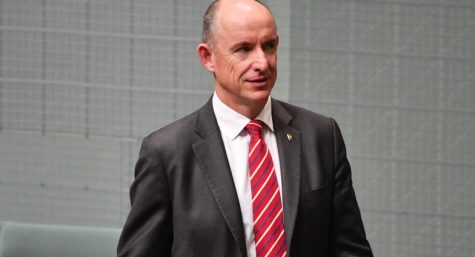 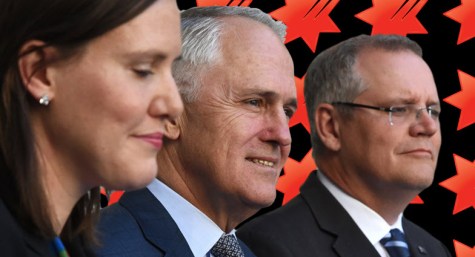 And to save employer/donors the inconvenience of having to dig into those profits to provide workers with higher (‘liveable’ to those most dependent and on the borderline) wages, penalty rates and conditions, this government wants to take that burden and give tax-cuts instead – so that in the future, when times get tougher, and tax revenue is too low, our social services will be cut to meet that “means”? Because which government is going to raise taxes to meet our needs? We’ll be left paying the “compounded interest rate on their political self-interest”?
Just like that diabolical economic duo of Howard & Costello – racing around their Gotham City pissing the mining boom up the wall of political, vote-buying/bribery expediency, with the short-falls we’ve had to put up with since – in areas such as health, care, education, transport, energy, environment and R&D.
If “The best form of welfare is a job” – perhaps this government could try turning their hand to the job of governing in the interests of the welfare of the majority : rather than the interests of such a minority (in turn as “liberal” as they might be in their donations to such a minority, as the party in government)?

This mob are trying to do the same thing against a wall with their latest new found wealth, will they ever learn?
Innes Willox had a bleat today re shorten’s plans for changes to the Fair Work Act, miserable bugger.

any government or political party that does not understand the link between wage fairness and recession is asking for a repeat of 1929 and a financial collapse, why give everything to an extremely greedy small group that already has everything at the expense of the majority that lives from pay day to payday, the rich don`t have to spend, the the rest have to , this trickle down economic rat baggery has been the cause of economic disasters from time immemorial and time and time again shows that those that do not learn from history are condemned to repeat i.t

The cunning reptilian gaze behind Morrison’s fair dinkum, Aussie bloke, one of youse persona emerges intermittently, especially when the unemployed or homeless are mentioned. This faux christian chancer couldn’t give a fuck about wage stagnation, except to the extent that it affects his re-election chances. Unions were formed as the only counter to rapacious bastards like many of those in the Liberal party. Liberals prefer forelock tuggers to grafters.