And the Gold Wankley for 2018 goes to… Seven

In a year of dodgy journalism, Seven stood head and shoulders above the rest

Here at Crikey we like to take the time to acknowledge the very worst reporting our profession has to offer: the cock-ups, beat-ups, spin and plain old junk journalism. Reviewing the seven Wankley Awards handed out this year, there was one very clear winner for the 2018 Gold Wankley.

Of the Wankleys awarded this year, three were awarded to programs on Seven (plus one special mention in a collective award). That list doesn’t even include Seven’s increasing tendency to go for the most racist content possible. We didn’t award Wankleys to the network for having neo-Nazi Blair Cottrell as a guest on the news last summer, or for that Sunrise panel about Indigenous children’s welfare (which was found by the regulator to incite contempt based on race), or apparently providing talking points for Pauline Hanson.

The stories Seven received Wankleys this year for in chronological order are:

Following up a Queensland Courier Mail article in January, Seven News Sydney took out the first Wankley of the year by trying to localise a reported move by the Queensland government to remove gender from its driver’s licences. Using a grab from NSW Roads Minister Melissa Pavey saying it would not happen in her state, Seven neglected entirely to mention that, as in most Australian states, gender hasn’t appeared on licences for many years.

Reporter Alex Cullen sat down to conduct a paid interview with the second-most recent Nationals MP caught up in a news story about his private life, Barnaby Joyce, in June. With questions including whether Joyce’s new partner Vikki Campion was “sassy” and who of the two made the first move, Cullen managed to make one of the biggest news stories of the year into a soft-as-butter puff piece.

Running with the “African gangs” narrative on its flagship current affairs program, Sunday Night, in July, the two program segments were a sensational beat-up, incorrectly reporting that “barely a week goes by” without another crime apparently carried out by the “gangs” (which police have said don’t exist).

The dangers of Fortnite

Seven’s Sunrise also got a shout-out in a rare collective Wankley handed out in June to all the news outlets participating in the grand beat-up of video games following the popularity of Fortnite. The breakfast program got onto the topic twice — once about the dangers of children talking to strangers online through the game, and another about teenagers’ obsession with it.

So congratulations, Seven, and thank you from all of us at Crikey for your contribution to the public’s incredibly low trust in the media. We’re sure your continued cost-cutting and attempts to get rid of your staff enterprise bargaining agreement won’t affect your commitment to journalism in the new year. 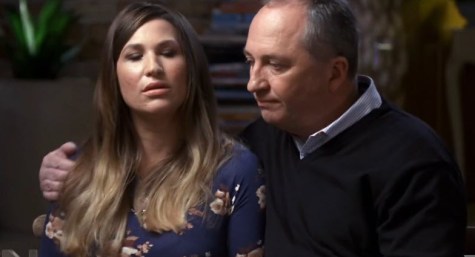 And the Wankley goes to … ACA and The Hun

And the Wankley goes to … Fashion Week coverage, belittling the big

We’re sure your continued cost-cutting and attempts to get rid of your staff enterprise bargaining agreement won’t effect your commitment to journalism… k And I’m sure it won’t affect their commitment either. Long live Muphry’s Law.

Muphry put that stray ‘k’ in there. See?

Good old Muphry. Not half the fame of Murphy but much better at typos.

Also it’d be a bit difficult to affect something that doesn’t exist.
‘Seven journalism’ would be a moronic ox.

Seven and the after dark, witching hours on Fox share the gong I reckon. Honorable mention to all those reporters and newsreaders, including, gasp, some on Aunty, who talk through their nasal passages; oh for a voice coach to help with diaphragm breathing and projection. Also, excellent stretching of vowels to infinity. Ow-er for hour is a favourite. The list is extensive.