Sorry to Bother You lacks subtlety, but that’s not a bad thing

This is a positive film review. So please, don’t expect too much. Not only am I unaccustomed to the labour of positive expression, I am hardly in the habit of reading any sort of film review at all.

This is the fault of film reviewers, a group made so miserable by the century’s greatest cinematic atrocity The Shape of Water, they sadistically organised for us all to share their pain. If you have not seen this drunk child’s drawing of copulating fish, do not correct your mistake.

Even in the time before director Guillermo del Toro lost a bet and was coerced into the cruel joke of accepting an Oscar for The Shape of Water, film reviewers omitted the detail our golden era of unlawful downloads demands: is this worth putting on pants for?

Comrades, you can pop on your strides for the unfeasibly funny Boots Riley. Sorry To Bother You is worth at least as much as one bus-replacement service, endurance of the gentrified artsy cinema in which it shall be playing and the swift end to late capitalism for which its director and writer very clearly longs.

Lakeith Stanfield, whom you may have seen in the violently good horror comedy feature Get Out, plays the young Cash Green, a millennial so crushed by life in a near-feudal US city of the near future. He sells nothing and makes no money until Danny “Lethal Weapon” Glover instructs him to use his “white voice”.

“I’m not talking Will Smith white, I’m talking about the real deal.”

The white voice is not Eddie Murphy’s castrated white voice from the 1980s stand-up specials Delirious and Raw, which is very funny, but a bit too often reprised by the Wayans brothers and others. It’s a new white voice, provided to a perfect pitch by the very white-voiced David Cross. (You may know Cross as Tobias from Arrested Development or you may wish to know him also with Bob Odenkirk on W/ Bob & David, an inappropriately funny sketch thing on your Netflix.)

Cash speaks like a golfer, or perhaps a breakfast announcer on Christian FM, but with pain. Everybody in this universe is in pain, even the falsely conscious white ruling class, who come to reward Cash for his magically white voice. In the least pain, though, is Detroit, played by Tessa Thompson, hitherto known to me only as the mean c-suite lady from Westworld. It’s not PC Gone Mad or anything that it is a woman of colour who has found a way to laugh at this near-future, which bypasses feudalism into a slave economy and next into a division I won’t ruin for you. It just makes sense; for her, the world has always been worse than any man or white woman can possibly conceive.

A number of those evil film reviewers make the claim that Sorry to Bother You lacks subtlety. Like that’s a bad thing, or an unexpected thing in a comedy about an impoverished millennial whose sociopathic “white voice” turns out to be a commodity. Other evil film reviewers make the claim that it’s like sitting through Marxism 101. Speaking as a graduate of Marxism 102, I can say that this is untrue. Riley has done his reading and his doubting. These are good gags uttered from within a stable theoretical framework and any reviewer that says otherwise is using too much of their white voice.

Look. Honestly. The whole thing was just an entire delight. If you don’t mind a spot of class analysis, you do enjoy a spot of obscenity and you’re a bit jolly bored by “diverse” characters being written only in terms of their pain, a la Nanette, you’ll jolly love it.

It’s not naive, this flick. But it is about as subtle as a brick. Like that’s a bad thing.

Dear AACTA: vote for Gary Waddell or I will burn your houses to the ground

‘You guys have got a thumb up your ass’: interview with Marlon Wayans 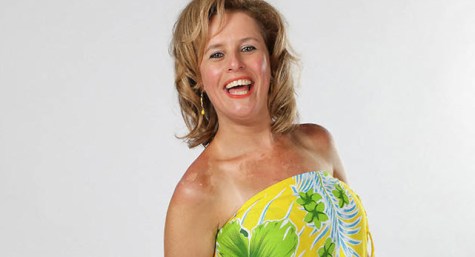 Anne Edmonds’ comedy is truly, madly, deeply Australian – and that’s why it works

Good God Raz…you like something!
This just will not do.