How Scott Morrison made at least seven blunders in one sentence

It's been two weeks since Scott Morrison told off the school kids of Australia, but its effects will be felt for a long time yet.

Perhaps he wasn’t thinking. Perhaps as the policy differences between the two major parties diminish down to nothing, nothing can be thought. Either way, on November 26, 2018, Hansard reads like the most moralising bits of The Swiss Family Robinson, but without the fun of animal husbandry: “We do not support our schools being turned into parliaments”; “Kids should go to school”; “We think kids should be in school learning”.

I tried to identify a purpose for this Get Off My Parliamentary Lawn fit. I failed. Instead, I identify some of the ways in which Morrison failed himself and the nation’s institutions and youngest, most ardent citizens.

7. A failure of strategy

In 2017, Scott Morrison warned his Liberal Party fellows they could no longer, “slavishly follow past political orthodoxies” post-GFC. He acknowledged that earnings among the many had declined, anomie had accelerated and that the class who sought to do “politics-as-usual” would be doomed to irrelevance. A year later, Morrison has forgotten his own advice and become irrelevant in offering politics-as-usual, albeit those of a Menzies-era vintage.

That 2017 “ScoMo’ script was despicable but savvy. It urged for anti-authoritarian messaging and might have come directly from former Trump Whisperer, Steve Bannon. The 2018 script is more Nancy Reagan.

6. A failure of liberal democracy

Those who lead Western nations must appear to honour rights, even if they intend to legislate them away. Freedom of assembly and expression ought to be a favourite for a party otherwise committed to enslaving the nation to corporate tax cuts, which are more likely to increase dividends for the few than grow jobs for the many.

What with their degenerate capitalism, surveillance, homophobia and The Woman Thing, Scott’s lot would do well to remember the “forgotten freedom” of free speech, per Tim Wilson. Get out the Voltaire, “ScoMo” and, if not to the death, then at least to the end of question time, pretend to defend the rights of those who despise you.

5. A failure to butt out

Haven’t you seen The Slap, Scott? One simply doesn’t go about disciplining other people’s kids. It’s okay for me to tell my kids to Stay In School, Eat Your Veg, Just Say No etc., but when anybody else does so, this is — what’s the word?—an imposition.

It was not Morrison’s revulsion for Safe Schools that was reassuring to certain voters as much as his revulsion for imposition itself. “I don’t want the values of others being imposed on my children,” he said, then clean forgot that every other parent feels the same way.

4. A failure of branding

Those deluded few who saw Scotty as a fair dinkum Aussie wont to “smash” a brekkie beer etc, now think now of him as a slavishly orthodox informer. What sort of “bloke” dobs on kids for wagging? A head prefect technocratic bloody un-Australian wowser elite who’d be more at bloody home with the Greens is bloody who.

Perhaps when performing in church hall musicals as a lad, Morrison became used to rebukes from adults. Most other kids do not. To outright tell a group of teens what they must not do is to guarantee that a greater number of them will do it. Just as abstinence education creates pregnancy, the instruction to abstain from protest will create a generation of dissenters.

2. A failure to build customer loyalty

For a bloke who’s been in the cheesecake business of marketing since childhood, you’d think Scotto would understand his target teen a little better. This was his greatest marketing misstep since signing off on the Where The Bloody Hell Are You campaign.

Advertisers spend billions dazzling, flattering and acquiring young consumers. A positive formative memory of a brand can create a lifelong affinity, a negative memory can destroy the possibility and you’d think, wouldn’t you, that a bloke once paid $350k a year to market Australia could stop his paternalistic gob up for the sake of future custom.

Until November 26, I always supposed that the Morrison of today would appear in the books of tomorrow as placeholder text. Instead, old Lorem Ipsum has inserted himself in the memories of an entire generation with his absurd tut-tutting. This will be to the short reign of Morrison as knights and dames were to Tony Abbott. 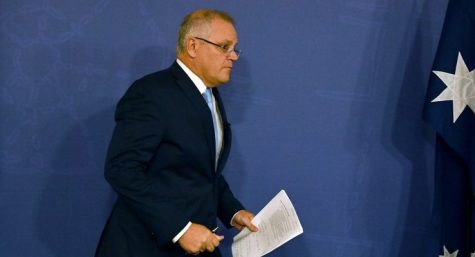 So in summary, he’s a prick?

True, and I’m reminded of the good sheepfarming manor lord who once decreed that life wasn’t meant to be easy.

I didn’t know the compositor use of Lorem Ipsum – I thought MzRaz had overimbibed the eggnog and it was a Paradise Lost reference to Satan’s address to the Fallen in Pandemonium “whose portion is so small Of present pain, that with ambitious mind Will covet more.”
Loathing Mr Shouty as I do, I wouldn’t deem him Satan – Mammon, the least erected spirit perhaps.

How does he wrong me, let me count the ways!

Nice work HR, although counting how many errors in a Morrison thought bubble may be akin to counting angels on the head of a pin.

You may be right, this may be Morrison’s dames and knights moment, God knows it’s worthy, but so many contenders plus we have 5 more months of this idiot and an election campaign based on fear and loathing. You may have gone off prematurely.