The Reserve Bank has flagged it is already thinking about cutting, rather than raising, interest rates — a key observation in the wake of a significant reappraisal of our current economic performance.

A few more quarters will give us a better perspective, but this week may prove to be a key inflection point for the economy and monetary policy.

In a speech to the Australian Business Economists group last night, Reserve Bank deputy governor Guy Debelle made it clear that while the central bank still saw the next move in interest rates as up, a cut was also being considered. “The Reserve Bank has repeatedly said that our expectation is that the next move in monetary policy is more likely up than down, though it is some way off. But should that turn out not to be the case, there is still scope for further reductions in the policy rate. It is the level of interest rates that matters and they can still move lower.”

The last time the RBA cut rates was in August 2016. Since then, the universal assumption has been that rates would start climbing again at some point — although the expected date for that has been pushed further and further back in the minds of economists, first into 2019 and, this year, increasingly into 2020. As we’ve regularly pointed out, there are some galahs at the Financial Review who, from the safety of academia or the wealth of former bank executive positions, have been insisting the RBA should have been lifting rates already, regardless of what damage it inflicts on the economy.

Stubbornly low inflation, wage stagnation — the causes of which the RBA has visibly fretted about — and the refusal of the government (or business) to consider doing anything about it, have all served to extend the pause in rate movements, despite a stronger global economy.

Debelle’s speech was reflecting on the financial crisis of a decade ago. “The crisis very much demonstrated the critical importance of keeping the lending flowing,” he said. “The lesson is that countries that did that fared better than countries that didn’t. That lesson is relevant to the situation today in Australia, where there is a risk that a reduced appetite to lend will overly curtail borrowing with consequent effects for the Australian economy.”

That comment shows the slowdown in home lending by the banks is also starting to concern the RBA and add to that list of downward pressure on growth. Wednesday’s September quarter GDP numbers, and the extent to which annual growth seems likely to undershoot the RBA’s forecasts, will add to this concern, though more as a symptom confirming problems it already knew about. The fact that the peak of global and US growth now appears to be behind us will only reinforce the bank’s watchfulness.

AMP’s Shane Oliver gets the kudos for spotting where the RBA might head — he has been ahead of the pack in pushing back the timing of a likely rate rise into 2020 and switched to suggesting the next move was a rate cut in the wake of Wednesday’s numbers. “With the RBA still seeing the next move as being up it will take them a while to change their thinking so we don’t see rates being cut until second half next year,” Oliver wrote on Wednesday. But Debelle’s speech suggests the RBA is already adjusting its thinking and will do some more reflecting over the summer break. 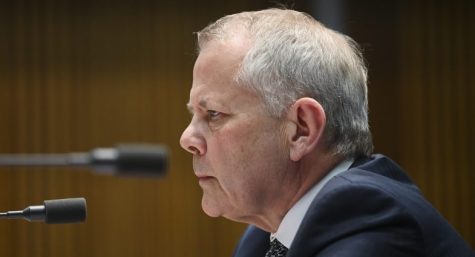 What if the lending is for housing at vastly inflated prices?

The RBA which seems to have seen itself as the department of making sure the housing bubble was fueled now has a full crash landing of Hindenburg proportions staring it in the face. Now it’s going to lower rates and engineer some quantitive easing.. All that soft landing shite and all the fundamentals are sound crap that these pretenders have been sprouting for years is about to be shown for what it was … Spivery.

Cheap stuff is rarely well regarded so it’s hard
Here’s a wild thought – it’s just occurred to me so not fully thought out but what about a government backed mortgage tied, in reverse ratio, to an idividual’s PAYE?
It would get rid of the hot-money wastrels, help the lowest paid get a home (not a house, pace Polly Adler, who seems to be the role model of the current shysters) and generally reduce the ludicrous inflation of something that should be a basic human right.

This shows the weakness in our current economic data. The stats are saying record low unemployment and strong GDP – well no these are simply not true measures of the economy any more.