Would an end to the Berejiklian government be a bad thing?

Crikey readers discuss the legacy of the NSW Liberal government, and the necessity of student protesters.

Crikey readers in NSW have long taken exception to the “good” light the Berejiklian government is cast in when compared to their shambolic federal cousins — they feel it betrays the state government’s own significant shortcomings. Yesterday they showed as much when responding to Bernard Keane on the threat of Scott Morrison bringing down the NSW Liberal government. Elsewhere, readers continued to discuss the necessity of student rallies to combat climate change, and the absurd conservative responses to them.

On the fate of the Berejiklian government

John Quiggan writes: NSW Labor is certainly plagued with scandal, but the NSW Libs have lost a string of MPs in similar circumstances, most recently in Wagga. As for competence, what about the massive waste of public money on demolishing and rebuilding stadiums? And the continued farce of private-public hospitals. In what way is this government better than those in Victoria and Queensland which have delivered public services and whose scandals (red shirts and hospital renaming) are trivial by comparison with NSW?

Malcolm Grant writes: They’ve sold off almost every single public asset left, entered into a string of dodgy hospital deals, starved the TAFE system of funding, destroyed the nightlife of the CBD (and the thousands of associated jobs), introduced some of the worst planning laws in the country and ripped up the bulk of the roads in the city to build a light rail system they can’t complete and that won’t ever work. On top of that they’ve facilitated the construction of the WestConnex freeway, that is now worth 20% of what they’ve paid for it.

Robert Smith: My view of the NSW govt is mixed. Baird started some needed reforms, managed them badly and jumped ship when the going got rough. The current Premier has backtracked on several issues (e.g planning and development), trying to avoid fights with everyone to be a smaller target & throwing money at greyhounds. Go figure.

On the student rallies (and the right-wing response to them)

Roger Clifton writes: Bernard says that effective action on climate change would cost no more than a carbon price. But let’s not kid ourselves that global extermination of fossil carbon release will be easy. It will be disruptive, expensive, even revolutionary and possibly bloody. Fossil carbon emission should be unforgivable at any price.

Hoojakafoopy writes: “We’ll be less Activist if you’ll be less Shit” sums things up beautifully. It should be a rallying cry.

Ng GJB writes: Economics is a false measure, a fabricated construct that the small minded and greedy cling to as if it is a factual science; it’s not. Economics alone is not any valid reason for action to safeguard the environment, and attempting to combat human causes of climate variation. Money won’t buy anyone’s way out of global catastrophe so stop regarding it as important.

Sean Arthur writes: I find it utterly unremarkable that the generation most affected by the government’s devotion to burning carbon is more than a little cranky about it.

thelorikeet writes: At the heart of this protest was the deep ignorance and impenetrable and arrogant self-righteousness of Andrew Bolt, Craig Kelly, the PM and the idiot-children overpaid pseudo-journalists at The Australian, meaning the school students’ best (and maybe only) option being that they speak for themselves, and in doing so, speak for the rest of us. 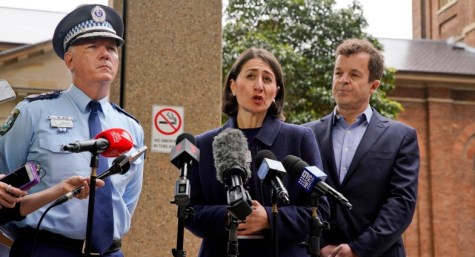