The Morrison government has been overwhelmed by so many catastrophes already -- and yet, somehow, there's more in the tank.

Alfred Hitchcock famously delineated the difference between suspense and surprise in filmmaking. Put simply, surprise is a sudden explosion interrupting a conversation, while suspense is letting the audience know the bomb is there a minute earlier.

The Morrison government manages both states simultaneously. While it has been hit with so many explosions it’s a wonder it has any limbs left, there are still many bombs sitting under the table. Here’s a rundown of them as we enter the last week of parliament for the year.

The sound of invisible hands clapping

Soon after he was ousted, former PM Malcolm Turnbull famously described fellow knifees Kevin Rudd and Tony Abbott as “embittered … miserable ghosts” and promised he’d never hang around that way. While he left parliament immediately, he’s not exactly gone quietly into the night. There was the Q&A appearance, that anti-Abbott Instagram account, the various swipes at Peter Dutton and the hard right that did him.

Of course, it could be argued that some of this wasn’t meant to be heard by reporters. Also, the same people who saw his malign influence behind the personnel issues afflicting the government (see below) condemned him for keeping silent during the Wentworth campaign.

He took it up a notch over the weekend, making two very explicit and direct interventions. First, advising Scott Morrison that he should go to the polls early, so as to spare the Liberal government in NSW, which goes to the polls in March next year and is currently being “poisoned” by the federal chaos. The second was an attempt to counter Morrison’s own intervention to save the member for Hughes, Craig Kelly, from preselection defeat.

If there was a perfect symbol for the current parliament’s combination of surrealism and blinding incompetence, it would have to be this: the government is currently quaking to rubble over the preselection of a backbencher that no one has heard of (although we here at Crikey have done our best to make his contribution to Australian public life better known).

The Sydney Morning Herald reported this morning that Turnbull contacted senior NSW Liberals, trying to kill off a mooted move to protect sitting MPs from preselection battles across NSW with state emergency powers, aimed specifically at saving Kelly, who has more or less promised to quit the party and join the crossbench if he loses preselection.

As a synecdoche of the whole situation, on Sunday night, Kelly shouted the following at Liberal mayor Carmelo Pesce, after he refused to shake Kelly’s hand:

You’re a fucking prick! Are you fucking kidding me? You’re not going to fucking shake my hand?

They were, incidentally, at a gymnastics club to hand out awards to kids. Because no one reads a room like our boy Craig Kelly.

In other news from the unappeasable right of the Liberal party, Senator Jim Molan — a man who only has his job because TWO other people were found to be ineligible under Section 44 of the constitution — called for a similar intervention from Morrison, saying he wouldn’t be “taken for granted”.  And, perhaps even more ominously, Tony Abbott, who was temporarily sated by the end of Turnbull, has mentioned that he thinks he could be prime minister again.

The resignation of Julia Banks was certainly an explosion. It blew up Scott Morrison and Treasurer Josh Frydenberg’s budget announcement. It provided a lot of damaging optics — the image of the men of the Liberal party scarpering as she gave her resignation speech contrasted unflatteringly with Banks surrounded by female crossbenchers, or sharing a moment with Labor’s Anne Aly.

But beneath the smoke is another potential time bomb. With the government holding less than half the seats in the lower house, it’s more and more vulnerable to losing damaging votes (to the extent it’s even planning on sitting). While Banks has promised to provide the government with supply and confidence, there is one area she is not going to help them out…

Section 44 is still a thing

Banks’ current dissatisfaction with the Liberal party can be traced fairly directly to the leadership spill that failed to install the hard right’s preferred candidate Peter Dutton. During the spill it became public that Dutton might himself fall victim to the constitutional section that had wiped out 17 members of parliament and implicated countless others. Dutton’s potential breach surrounds a child care centre that benefits from government subsidies. Having been coy while she was still a member, Banks has declared that Dutton has a “very clear” case to answer and ought to refer himself.

Given that the majority of her fellow crossbenchers support the referral, it will be interesting to see if Labor risks Morrison’s promised retaliation — to refer three Labor MPs if Dutton is sent to the high court — by backing a motion to oust Dutton. 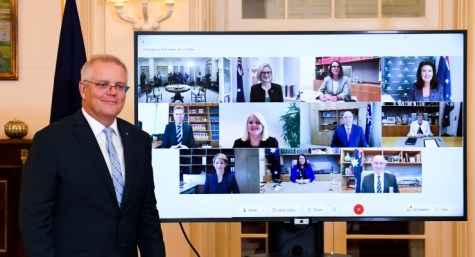 As a minority government, can it refer other MPs to the High Court if it doesn’t have the support of the crossbench, which isn’t a given?

I’m bemused by the use of the word ‘synecdoche,’ referring to Kelly’s rant. I can’t see anything collective representing a part, in the way that ‘crossbench’ or ‘government’ refers to individual MPs or Morrison respectively.

It can’t, but the crossbenchers might quite reasonably find it hard to justify referring Dutton but not other MPs with similar Section 44 questions. It seems that Wilkie and McGowan are leaning towards referring everyone in one go, which is fair enough (I loathe Dutton as much as anybody and would be delighted to see him lose his job, but even I can see that this is an edge case at best).

I personally take the view that at this point in the government’s term, nobody will appreciate the highly expensive pantomime of High Court cases (which may not even be heard before the next Federal Election is called) and then byelections (which would almost definitely not be able to occur before the next Federal Election is called). If Dutton and any other remaining questionable cases take no steps to put themselves beyond a shadow of a doubt before nominating for the 2019 election, refer them after that.

The media and pollies have always been far more impressed with s44 cases than the general public, who have I think returned every single one of the lower house MPs caught up in these byelections.

“Legal Disputes under Section 44
There are at least three ways the High Court (sitting either as the High Court, or as the Court of Disputed Returns under the Commonwealth Electoral Act 1918) might come to hear a case concerning the qualification or disqualification of a candidate for federal parliament. See Sarah O Brien, Dual citizenship, foreign allegiance and s. 44(i) of the Australian Constitution Background Papers, no. 29, Parliamentary Library, 1992. A case can be initiated by a candidate or voter, through a petition under the Commonwealth Electoral Act, disputing the result”

Anyone who is an voter or candidate of politicians can, assuming funding – who pays for cases n the Court of Disputed Returns – can dispute their eligibility post election (within 40 days)

Crisis watch- there is nothing but crisis in Australian politics, its inescapable and the alternative governments are always much the same.

Career politicians are not ideal people to be elected representatives of the voters, they represent their parties first and foremost.
Some how Australia needs to rid itself of these damaging parasites who contribute nothing to the citizens, environment, society or culture of this country.

RANDOMLY CENSORED COMMENT ABOVE, NO EXPLANATION FORTHCOMING FROM PUBLISHERS

RANDOMLY CENSORED COMMENT ABOVE, NO EXPLANATION FORTHCOMING FROM PUBLISHERS

Judging for your all caps scream, above, perhaps you just explained the event perfectly?

No the caps are in response to the random censorship, which is, on average every third comment is moderated and not posted for 48hrs +
The content is not abusive or derogatory at all, so I find it very frustrating and not worth the bother of renewing my subscription.

Ng GJB
December 3, 2018 at 2:41 pm
Crisis watch- there is nothing but crisis in Australian politics, its inescapable and the alternative governments are always much the same.

Career politicians are not ideal people to be elected representatives of the voters, they represent their parties first and foremost.
Some how Australia needs to rid itself of these damaging parasites who contribute nothing to the citizens, environment, society or culture of this country.

It says a lot about the severe disfunction within the Liberal Party that Malcolm has been more effective in his opposition to idiot hard right ideology and personalities since he resigned from parliament. And why does he have any duty to stay silent?