Defence Minister Christopher Pyne has allegedly threatened in secret to refer crossbench MP Kerryn Phelps and at least two Labor MPs to the High Court if parliament does the same to Home Affairs Minister Peter Dutton.

The New Daily reports that Pyne communicated the threat to crossbenchers last night following Julia Banks’ shock resignation from the Liberal Party, which has increased Labor’s chances of referring Dutton over government payments to his family’s childcare centre. Pyne, who had earlier said Banks needed to “face the consequences of her actions”, allegedly named other potential victims of section 44 as SA Labor MP Tony Zappia, who has questions relating to a fitness centre he founded in the 1970s ($), and WA Labor MP Mike Freelander for, like Phelps, his work as a doctor.

Both The Sydney Morning Herald and The Australian ($) report similar threats. Neither Pyne nor Phelps have commented on the direct allegations.

Former NSW Labor leader Luke Foley has reportedly informed colleagues he will abandon threats to sue journalist Ashleigh Raper and the ABC for defamation, after allegations he sexually assaulted Raper at a 2016 Christmas event led to his resignation earlier this month.

The Australian ($) reports that Foley, who will leave parliament in March, is expected to announce the decision by the end of the year, weeks after a group of senior ALP figures ($) began calling on him to drop the potential lawsuit. While a link to the alleged decision is unconfirmed, Labor focus groups have unsurprisingly detected voter disgust over Foley’s handling of the allegations.

Western Australian Premier Mark McGowan has lifted a statewide moratorium on gas fracking in the Kimberley, Pilbara and midwest regions. McGowan promised that the temporary ban will only be lifted on current petroleum titles, that landowners and traditional owners will get veto rights, and royalties will help fund renewable energy projects.

According to WAToday, McGowan’s decision came with the results of a year-long inquiry into fracking that recommends new practices and technologies to manage environmental risks.

The US President alleges men, women and children seeking asylum at the US-Mexico border were only hit with a good type of tear gas, a claim almost immediately disproved by the commissioner of U.S. Customs and Border Protection.

“Scott Morrison’s claim yesterday that a national integrity body is a ‘fringe issue’ should haunt him all the way to his political grave. The Prime Minister likes to deride issues he’s not comfortable with as emanating from the ‘Canberra bubble’, but dismissing Australians’ growing belief that the political system doesn’t work for them but for special interests is the ultimate example of a politician trapped inside a bubble, disconnected from reality.”

“Latham, recently appointed NSW leader of One Nation, had accused Faruqi of “anti-white racism” in his online commentary show Mark Latham’s Outsiders. Latham suggested this contributed to Islamist terrorism. Faruqi sued in October last year, saying the comments portrayed him as knowingly assisting terrorists who want to kill Australians. Faruqi’s lawyers Maurice Blackburn put out a statement saying Latham’s bill, including costs and damages, could be in excess of $100,000.”

“For years, the so-called ‘most progressive government in Australia’ has presided over the steady decline of these areas of Melbourne, with unemployment heading towards 25% and beyond in areas such as Broadmeadows and Craigieburn. Local members are largely useless — Broadmeadows MLA Frank McGuire commuted from Brighton for a while, before being shamed into moving… to Fitzroy. And there’s no public industry policy plan in place to compensate for factory closures. Almost nothing has been done after fires at ‘recycling’ plants — waste dumps — bathed the area in toxic fumes.”

Jimmy Barnes calls for children to be removed from Nauru: ‘It’s not the Australian way’

Liberals need to give up on the merit myth — Shivani Gopal (Sydney Morning Herald): “Julia Banks announced her decision to quit the Australian Liberal Party yesterday. While unfortunate, it is hardly surprising. It’s the result of what happens when parliament and politicians fail to represent the people they serve and cling to the myth of meritocracy. Banks is not buying it anymore and neither should the Australian people.”

Rethink negative-gearing scare campaign — Peter van Onselen (PerthNow): “The housing market here in WA has been weak for some time, but the Eastern States are only now starting to also feel the pinch. The new Treasurer Josh Frydenberg is leading the attacks. Based in Melbourne he sees first-hand the property jitters all around him. I recall being surprised that the last election didn’t see more focus on the Labor policy.”

In crime reporting, we should ask better questions about the relevance of religion and ethnicity — Denis Muller (The Conversation): “It is unfair to blame the media for reporting what the authorities say in the immediate aftermath of big breaking news stories. At that point, who knows what is relevant and what is not? At the same time, the media have an ethical obligation to at least question the authorities about the relevance of statements about ethnicity, religion or other personal attributes.” 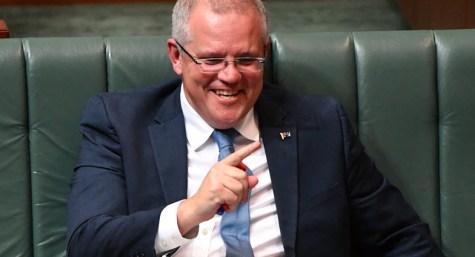 Pyne’s now Dutton’s bitch. Who would have thought!

Correction. Mike Freelander is a NSW MP, not a WA one.

Hollow threats from Pyne. The crossbench could easily vote to refer Dutton, but not any other MPs. Seems he hasn’t quite got used to not having the numbers.