Victorian Liberal MP Julia Banks has quit the government backbench and will spend her remaining time in parliament as an independent, after a stunning announcement at midday in the House of Representatives.

Banks — the only Liberal MP to win a seat off Labor in the 2016 election — announced in the wake of the ousting of Malcolm Turnbull that she would not be recontesting her seat of Chisholm, and complained of bullying behaviour by supporters of Peter Dutton during the leadership crisis. She signally failed to receive any backing from Victorian state Liberal president Michael Kroger, who dismissed her on the basis that “politics is a rough business.”

In the aftermath of the Victorian Liberals’ drubbing in Saturday’s state election, Banks has shown just how rough it can be by shifting to the crossbench, leaving the Morrison government now two votes short of a majority, albeit while guaranteeing confidence and supply. Banks also indicated she was considering her future options, meaning she could stand as an independent in Chisholm — and given the poor state of the Victorian Liberal party currently, she would be be a strong candidate.

Banks’ announcement came hot on the heels of the government trying to shift the political narrative to the economy with Morrison and Treasurer Josh Frydenberg announcing the 2019 budget would be in April and would be a surplus budget. While they were conducting their press conference, however, Banks was rising to her feet in the Reps chamber, and any hope that this might generate some momentum for a beleaguered government was wrecked.

In the statement announcing the move, Banks cited the “regressive right wing” of the party and gender inequality.

My sensible centrist values, belief in economic responsibility and focus on always putting the people first and acting in the nation’s interest have not changed. The Liberal Party has changed, largely due to the actions of the reactionary and regressive right wing who talk about and to themselves rather than listening to the people. To continue to put the people before the party and act in the nation’s interest constructively, effective immediately, I will serve as a member of this House of Representatives as an independent representative.

Equal representation of men and women in this parliament is an urgent imperative, which will create a culture change. There is a blinkered rejection of quotas and support of the merit myth, that this is more than a numbers game. Across both major parties, the level of regard and respect for women in politics is years behind the business world. There is also a clear need for an independent and whistleblower system, as found in many workplaces, to enable reporting of misconduct of those in power, without fear of reprisal or retribution. Often, when good women call-out or are subjected to bad behaviour, the reprisals, backlash and commentary portrays them as the bad ones. The liar, the troublemaker, the emotionally unstable or weak, or someone who should be silenced. To those who say politics is not for the fainthearted and that women have to toughen up, I say this: the hallmark characteristics of the Australian woman, and I’ve met thousands of them, be they in my local community, in politics, business, media or sport, are resilience and a strong, authentic, independent spirit. 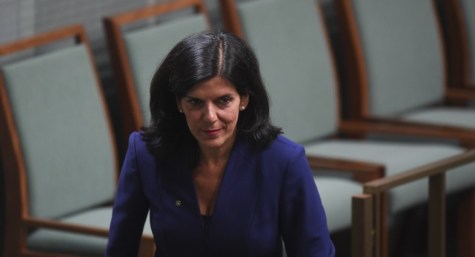 So I wonder what sleight of hand they’ll perpetrate to make the budget appear to be in surplus?

Time for the Governor General to act to end this miserable, lame duck government.

Given that it could not have a Supply Bill passed by the Senate, this is a precedent for the G/G to do so.
Admittedly wayyy back in ancient times so I forget who did what to whom but it was a Big Deal, apparently.
Reboot the Rage.

All is going to plan for Abbott, the wrecking continues unabated.