With so much emissions reduction talk focused on renewables, are we overlooking other areas for improvement?

Electricity generation accounted for 181.5 million tonnes of Australia’s greenhouse gas emissions last year, or 34% of the latest record-breaking round of figures. It’s easily the country’s most carbon polluting sector, and the only one we can claim to have at least made a (small) dent in. But what of the remaining 66% of emissions?

While a 100% renewable grid should absolutely be the priority, and could at least theoretically be done by the early 2030s, the fact that emissions jumped 1.4% last year begs the question: what other sectors could Australia be looking at for improvement? 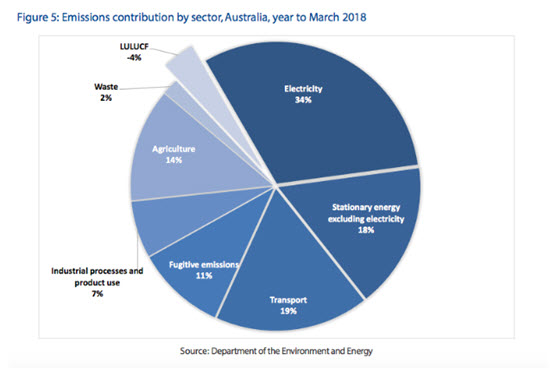 Transport is Australia’s second-highest polluter and its emissions jumped 2.1% last year. So how far off are those electric cars everyone’s always going on about?

What about commercially viable electric planes? They’re trickier, but coming. But even outside of electric vehicles, Australia is one of the only OECD countries to not have greenhouse gas emissions standards for existing options. As the Climate Council reported in September, the Coalition has sat on a perfectly good light vehicle emissions standard for four years now that, in terms of fuel efficiency, could save $8500 over a vehicle’s lifetime.

Finally, the Climate Council recommends shifting money from roads to public transport, and points to a Houston case study for how bus networks can be transformed from limited inner-city routes to a more practical, web-like grid network.

Coming in at number three, emissions from fuels burnt directly for manufacturing, mining, residential and commercial purposes rose 4.6% last year. The main source here is gas, and the overall increase was largely due to mining emissions from a 25.4% jump in LNG exports.

However, according to the Australian Renewable Energy Agency, 24/7 renewables such as biogas, geothermal and solar thermal could power industrial processes at less than a quarter of the current price of gas if made commercially available. They might not be cost-competitive with existing sources, but neither was large-scale solar before ARENA got involved.

In a report from June, the Alternative Technology Agency also found that, with advances in heat pump hot water systems, split-system air-conditioners and LED lighting, new home owners are currently $9000-$16,000 better off over 10 years by replacing gas with a 5KW solar system. Work is also being done (again, at a state level) to expand solar hot water rebates.

Our fourth largest sector, emissions from enteric fermentation (livestock burps and farts), manure management, rice cultivation and other agricultural processes rose 2.1% last year, largely because of an increase in cattle.

Of all the sectors, agriculture appears to be the most difficult to decarbonise, especially considering farmers are already facing historic droughts. The otherwise controversial Emissions Reduction Fund does however list carbon farming strategies such as cattle herd management, methane destruction from piggeries, and feed changes. If you’re looking for small-scale solutions, a recent Science article found that rejecting meat and dairy products is the most effective lifestyle change a person can take in reducing environmental impacts.

The obvious answer here is to leave fossil fuels in the ground, with the also obvious counter being Australia’s economic reliance on exports (including incredibly detrimental gas contracts). It’s why most of the states are, for once, just as culpable as the federal government.

But Australia’s status as the world’s number one coal exporter, and fourth largest for LNG, is partially why were just voted the worst performing country on climate action. It also increases the economic risk of stranded assets, and underscores our need for new exports (g’day hydrogen).

Industrial processes and product use

This was partially due to an increase in iron and steel production, which British billionaire Sanjeev Gupta’s company GFG already demonstrates can be processed with renewable-powered furnaces and recycled minerals. Ditto for cement: the largest global industrial polluter.

Secondly, the sector saw an increase in hydrofluorocarbons products, primarily used in refrigeration and air conditioning. These were implemented as substitutes for ozone-destroying substances. Australia is now part of a global effort to phase out HFCs.

Land use, land use change and forestry

Forests and agricultural lands used a net-sink of greenhouse gasses and, at -4% of the Australian inventory, “grew” 5.2% last year. While caring for land is obviously important and offers some agricultural strategies, using LULUCF as a negative for total emissions is also seen as kind of a cop-out.

With thanks to the Climate Council’s senior energy and climate solutions analyst Petra Stock for explaining some of the bigger, scarier scientific concepts.

Not being an expert, I’m a bit surprised that agriculture (not counting transport, stationary energy use or electricity) and in particular “enteric fermentation” even score a listing on this pie chart. Every single carbon atom burped, breathed or farted by livestock came from some feed that fixed it from the atmosphere some short while earlier. Cows don’t eat coal. It’s about as direct an example you could find of “renewable” carbon flows, surely? It has to be carbon-neutral.

Switch the humans from meat to vegetarianism and you have exactly the same flow, from photosynthesis to exhalation, just in humans, rather than cows.

The problem is methane which over its life in the atmosphere is 23 times the warming of carbon dioxide. Burning that methane does make it carbon neutral as it moves it back to that short cycle carbon that you were referring to.

It is good that we are at last talking about 100% elimination of emissions. However, we will still need to be vigilant that advisers don’t trick us into tokenism, making token reductions while fossil power continues to make up the remainder.

Full electric cars are heavy, expensive and of limited range but plug-in hybrids which store, say, 60km of battery power, augmented by a petrol engine which takes over when the battery is low would mean that many commuters could get by with little or no petrol for day to day use yet could drive their cars for long journeys using the petrol engine. Not ideal but a good compromise on current technology.

Conversely, an internal combustion engine and drive train is an awful lot of redundant weight to carry around, reducing efficiency, while you are doing all that electric weekday driving. Most of the contemporary electric vehicles already have greater range than my old Subaru. Quick charging is critical infrastructure for long Australian journeys, to be sure.

Recharging is the current killer on mass uptake of electric vehicles – which is irrational in the main as most cars rarely make journeys of more than 300kms in one go.
I do recall someone (in Victoria?) about ten years ago having a major go at establishing battery change stations throughout the state – mimicking an Israeli venture possibly – but it foundered ont he refusal of manufacturers to agree on a common battery configuration.
Roll on the hydrogen power cell.