One month after becoming Vietnam's second joint president and party secretary, "hardliner" Trong is presiding over a country rapidly outpacing its neighbours.

Trong is first to hold the positions of party chief and president concurrently since Ho Chi Minh, the father of modern Vietnam.

This has marked an unprecedented (although perhaps overdue) change in a system where four different leaders hold the country’s top posts. These are, in order of importance: party secretary, prime minister, president, and president of the national assembly (Vietnam’s rubber stamp parliament). Collectively, they’re known as the “Four Pillars”.

But there is more to this apparent consolidation than meets the eye, in a system where power at the top, unlike its northern communist neighbour China, has been balanced across a number of senior cadres.

The biggest change will be for Vietnam’s external relations. Diplomatically, the president — a more ceremonial role — has had to meet foreign counterparts, rather than the party secretary with whom the most power lies.

“Now Vietnam’s party leader can meet with other heads of state on an equal basis in terms of diplomatic protocol. Vietnam’s president will now be able to make international commitments with foreign leaders in an official joint statement,” reported Professor Carlyle Thayer, one of Vietnam’s keenest international observers.

The change at the top, as well as those that may cascade through the Vietnamese system as a result of it — such as possibly more powers for the country’s five vice presidents and other Politburo members — come as Vietnam’s importance in the region increases. The country’s economy continues to outpace most of Asia, with its GDP growing at 6.8% in 2017, faster than any of the big six south-east Asian nations except the Philippines. It is capturing much of the electronics manufacturing that is leaving China in search of both cheaper labour and and political certainty.

It continues to leverage its strategic significance, especially with the growing concern over China’s encroachment in the South China Sea, and with whom Vietnam has a territorial dispute. Vietnam has been adept at playing off China and Russia and has now included the United States in that mix.

Australia has tapped into the Vietnam opportunity better than it has with many other Southeast Asian countries, inking a Strategic Partnership in March 2018. Australian tourist numbers to Vietnam are rising fast (20% from 2015 to 2017) with student numbers coming the other way. Vietnamese was the fourth most common language spoken at home in Australia (1.2% of the total population), according to the 2016 Census.

The question now being asked is to what degree Trong will use his bolstered position to continue his signature anti-corruption campaign, and particularly whether he will venture into the uncharted territory of taking on former senior leader. One such leader is Nguyen Tan Dung, with whom Trong had been locked in a power struggle ahead of the the 2016 quinquennial party congress, where Dung failed to get the numbers to take the party secretary job following two terms as prime minister.

Originally rising as a reformer, fingers are now pointing at Trong as a linchpin of party corruption.

The campaign, like that of Xi Jinping in China, has been a method of power consolidation and had previously netted the scalps a number of Trong’s former allies: Politburo member Dinh La Thang, a number of senior executives from state run firms in the energy and communications sectors, the minister of information and communications and at least two senior army officers. There is a proposed cyber security law which may see the party institute more control over the internet in the same way that China has.

Trong, at 72 the oldest in the Politburo is now firmly in the driver’s seat, at least for the next three years when his term is up. 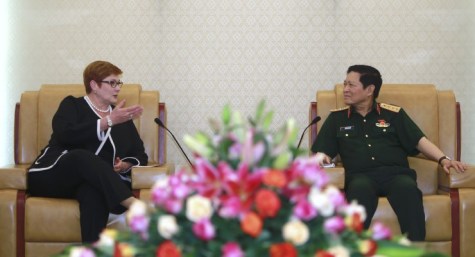 Good read about a country that was on everyone’s mind a generation ago and doesn’t exist these days as far as the msm is concerned.

Gotta lurve “Australian defense cooperation with Vietnam, worth $2.7 million annually…“.
I wonder when the rapprochement with the Taliban or Khmer Rouge will set in?