Welcome to the asphalt jungle

Welcome to Side View — a curated guide to new and overlooked content on politics, policy, and public affairs. This week: designing right-wing populism, loneliness, quantum stupidity and a certain zither.

Side View is partial to a bit of commuting but it’s not clear if this correlation is particularly meaningful: men commute further than women — and that may contribute to the gender pay gap — while pro-transit urban planning may contribute to right-wing populism (really?). And how big cities drive and sustain high-paying jobs. Meanwhile, it’s slogan-y oop north: a history of Queensland’s self-conception.

WHERE THE SIDEWALK ENDS

America’s physical and social infrastructure (not to mention voting system) is awful and it’s a deliberate policy choice. Plus, how a tax loophole is enabling US corporations to avoid property taxes, wrecking urban government budgets. And American Conservative explores how Eisenhower’s “military-industrial complex” (often cited, rarely explored in detail) has evolved since the 1990s.

Some like it shit hot: meet Euphorbia resinifera, a cactus that’s a little spicy… specifically, 10,000 times hotter than the hottest known pepper. So hot that it kills nerves… specifically, nerves that carry pain. A new era of spicy pain relief beckons (and no, you don’t eat it).

A physicist calls bullshit on the hype about quantum computing. In this week’s We’re All Going To Die Aren’t We, people don’t care about superbugs and are happy to keep overusing antibiotics, and a new GOP response on shooting massacres: guns don’t kill, zombies do.

IN A LONELY PLACE

An Australian writer faces old age and a new life in an aged-care facility, and gives us the compelling image of old men waiting to die. “It’s their endgame and they don’t wish to be distracted.”

Is the suddenly high-profile policy issue of loneliness caused by neoliberalism? I’m sceptical, but see if you think this makes the case. Some see the medicalisation of a “loneliness epidemic” as an attempt to invent a cure for our failure to properly engage with ourselves; others suggest we read a book. Crikey looked at the issue recently too.

If you were around in the 1980s you’ll remember Eve Van Grafhorst and, hopefully, feel deep deep shame about how this little girl treated by an Australia drunk on ignorance. If not, read this.

As much as I dislike the eating of mammals, it’s dairy I found easiest to give up when I made my cliched middle-class switch to ethical and sustainable eating — soy milk is a perfectly good replacement — and I have no qualms about free range or home-laid eggs. Thus I had a mixed response to an ABC journalist going vegan for a month. But read this on the last hours of cows and what happens to bobby calves in Australia, and you’ll never look at a glass of milk the same way again.

Without meaning to, Side View has become utterly obsessed, or at least faintly interested, in population and fertility issues. At the IMF, a new chart shows how the 2008 financial crisis significantly affected fertility. 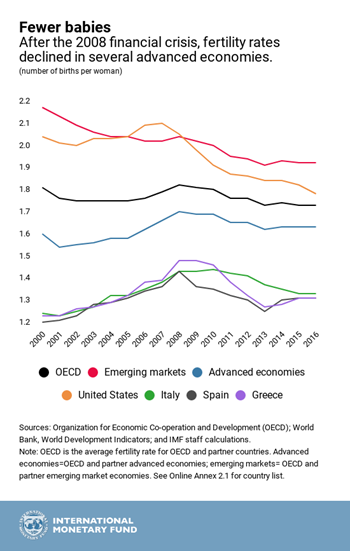 So I looked at the same numbers for Australia from the ABS, and we went through the same peak and fall: 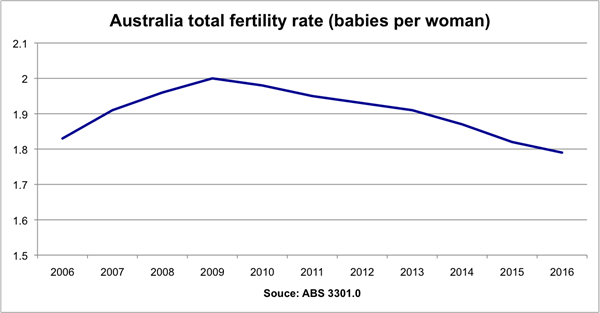 So… that we went through the same decline doesn’t sit well with the economic explanation which is the most prevalent explanation for the decline in fertility after the financial crisis. Australia never experienced a recession and has performed strongly in the last decade, albeit with stagnant wages for the last five years (when, admittedly, the decline accelerates). The end of the baby bonus, which was curbed in 2013 and axed in 2014, doesn’t seem to be to blame either, because it comes too late. Over to you, readers.

It’s 70 years since The Third Man was filmed in Vienna. Michael Wood takes a look at Greene’s original story (with the inferior ending) and the film it became. And if you’ve only ever seen it on late-night TV, check out the restored version.

Surely the graph on population growth isn’t suggesting that every woman in Australia, on average, had two babies in 2009? What exactly does the “fertility rate” measure and how is it calculated?