Why is it illegal to call the PM a cunt?

We like to think we're a nation of hard-living larrikins. So why can we be fined for naughty language?

A Tasmanian man named Allan Maccaul copped a $500 fine this week after he shouted “you’re a fucking muppet, you’re a fucking muppet” at Prime Minister Scott Morrison, at the Bathurst 1000 in early October. But wait, in the land where we apparently laud the larrikin, calling the PM a fucking muppet (hell, 50% of that description comes from Morrison himself) gets you set upon by the Protection Operations Unit?

The first laws against offensive language emerged in New South Wales in the early 1800s. They were penal ordinances which applied only to convicts, and could be used to punish them with brutal lashings for talking out of turn to their superiors. By 1849, comprehensive obscene and indecent language laws were enacted in NSW, and soon they spread across the colonies.

The law around “offensive behaviour”

Now, “offensive conduct” is a criminal offence in all Australian states and territories, although the exact definition varies between jurisdictions, and only the Australian Capital Territory doesn’t explicitly contain a language offence. Generally, the laws will prohibit “offensive, obscene, indecent, riotous, disorderly, violent, threatening and/or abusive language and behaviour”.

Further complicating the matter is the level of interpretation at play. A judge has to decide whether the behaviour is “calculated to wound the feelings and arouse anger, disgust or outrage in the mind of a reasonable person”.

Didn’t that guy get away with calling Tony Abbott a “cunt” that one time?

Yep. Well, kind of. Anti-corruption campaigner, former councillor and bright-eyed eccentric Danny Lim had his charge of offensive behaviour eventually overturned. Lim had been charged for wearing a sign which read: “PEOPLE CAN CHANGE/TONY YOU CⱯN’T/LIAR, HEARTLESS, CRUEL/PEACE BE WITH YOU”. In addition to being upside down, the “A” was rounded to make it look more like a “U”.

As it turns out, partly because of the “A” and the apostrophe, the judge ruled that Lim hadn’t “unequivocally” used the word “cunt”. But he also made a broader point about Australia’s generally robust use of language, freedom of speech and what a politician can expect as opposed to an average citizen.

This is an essential and accepted part of any democracy. That criticism can often extend to personal denigration or perhaps even ridicule, but still maintain its essential character as political comment.

There is no reason to conclude that the prime minister, as the leader of the federal government, should be treated any differently to any other person who holds or seeks political office.

A trio of Community Action Against Homophobia activists who chanted that Fred Nile should “fuck off” at a protest were cleared under similar reasoning in 2016.

So why then is Morrison being treated any differently?

There is a huge amount of discretion afforded to police about who they charge with offensive language — an officer can decide to simply ignore public bad language, issue a caution or issue an on-the-spot fine. It has been noted time and time again that Indigenous Australians are grossly over-represented among those charged with offensive language; indeed the Australian Law Reform Commission report on Indigenous incarceration recommended narrowing the laws, or repealing them altogether.

Further, as Elyse Methven pointed out in The Conversation, getting such a charge overturned requires resources and nerve. According to reports of Maccaul’s case, Maccaul — who referred to Morrison as “the premier” during the incident and had a small amount of cannabis and LSD in his backpack at the time, for which he was fined a further $800 — “did not appear to answer the charges against him”.

What’s a guy gotta do to get suspended from Twitter around here? 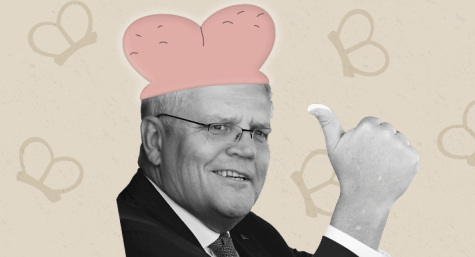 Sorry , but that is still offensive. The female genitalia shold not be insulted by comparison to politicians of the calibre of Morrison and Abbott (and quite a few others in the LNP government).

In fact it’s insulting to women to use the word for their genitalia as a synonym for a nasty person.

So, what about “dickhead, cockhead, dickwit, cocksucker, knobhead, bellend, prick….” etc etc.. you get the idea.
It may be insulting but it’s meant to be. I don’t know why expletives have to describe our generative equipment.. maybe it was the Christians….

What a thin-skinned little baby.

Some twat disappeared my contribution: why waste words on an inept politician of whom we will, please heaven, soon be rid?

If he had said “you’re a muppet” he’d have been OK?

Careful – I was disappeared from the Grauniad’s comments on the most recent FDotM cartoon for comparing various LNP members, past & present to our velour friends – apparently Miss Piggy is now porcina no grata.

I’m reminded here of the awesome Tony Robinson on Trump:

“Cursing rather than choosing the right word for the occasion is a little ignorant. Nevertheless following his behaviour over the WW1 memorial ceremony in France it has to be said- President Trump is a cunt, isn’t he.”