Chloe Hooper goes inside the beast of Black Saturday

The latest account of the Churchill fire complex and the man who started it is lyrical, assiduous and ultimately elusive.

We all heard a noise start, and it was getting louder. It was like a jet engine. I’d never heard a noise like it, and then the penny dropped — it was the fire coming.

Testimony of a CFA volounteer

In the terminology of those who track them, a fire has a head, a tongue, fingers, a rear and a tail. So Chloe Hooper notes in The Arsonist, her lyrical and arresting account of the aftermath of Black Saturday. The scientists recreating a fire’s path will, without meaning to, describe a “beast”, she writes. “This monster, which grew a tongue, a head, flanks and claw-like fingers, and stretched for mile after mile, taking whatever it wanted.”

Of course, the truth is somewhat worse. A fire — even this fire — is not malign, nor capricious nor vengeful. It can’t be bargained with or appeased. The terror of a spreading wall of flame is its blank, depthless indifference. It simply consumes as long there is fuel to consume. And the Latrobe Valley, in February 2009, was practically built from fuel.

Hooper has compiled years of interviews and research into The Arsonist, and divides her focus between the investigation that identifies the criminal of the title, the court case that follows, and then, an attempt to understand the man convicted of deliberately lighting the Churchill fire complex, which killed 10 of Black Saturday’s 180 victims. This assiduousness allows her to delve in and out of the actions and feelings of those involved like the narrator of a novel. 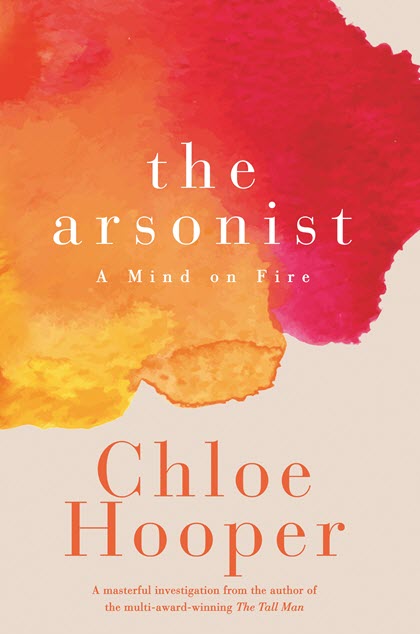 Hooper’s eye for vivid detail (she describes the first bulbs of flame the firefighters pass on the way to the conflagration as “newborn furies”) is fully taxed in her accounts (all relayed through hours of wrenching testimony from survivors and responders) of the fire. The words for what she is describing have been dulled by overuse, but it’s, well, it’s hell — or at least the tunnel that takes you there.

Survivors described the alien worlds created when one is walled in on all sides by flames and smoke, complete with their own time zones and weather patterns; plunging into midnight black and then a grizzly blood-red sun rise, looming pyrocumulus (a fire cloud), giant embers raining down like flaming arrows. Buildings scream as they’re engulfed, the windows crack and the curtains ignite. Flocks of birds fall dead from the sky.

For something approaching the scale of the Black Saturday fires, look again at the image at the top of this article — that choking Everest cloud coating an evil orange glow — and see if you can pick out the fire truck, a single, dark red mote of dust, floating past a bonfire.

And then there is Brendan Sokaluk, the autistic, semi-literate man who was only diagnosed after his arrest, and had spent his entire life bullied and bullying, menaced and menacing. There are two conclusions about Sokaluk that the book explores, depending on who is asked.

One telling is Sokaluk has a child’s grasp of the world and a profound inability to navigate interactions with the people in it, a man who simply could not produce the coherent malice it would take to deliberately and methodically bring about the horror of Black Saturday, and further, a man incapable of maintaining a lie. The other is that he is cunning, manipulative, able to tell people what they want to hear, to play up his impairments when it may shield him from the consequences of his actions. His history of making threats to, say, coworkers, are either the empty retaliation of a bullied man who doesn’t understand the content of what he says, or the sign of a simmering, destructive anger.

We believe both sides have come to their conclusions honestly. But the reader is afforded no such certainty — wherever these conclusions direct us, we are swiftly directed somewhere else.

Hooper ultimately knows that the question she and her subjects — the police, the lawyers, the victims — can’t avoid (“why?”) is, of course, unanswerable. What possible answer would do? This is why we can divine the conclusion Hooper herself has reached, but she avoids elaboration.

In The Arsonist, in the face of events that force us to reckon with pure animal horror, we may reach for neat conclusions and clear explanations, but again and again, they curl around our fingers and continue to billow toward the sky.

Five years on from Black Saturday, Victoria drags its feet on bushfire protection

It seems the problem is more for the insurance companies, less for us who love the Australian bush and build our homes in pleasurable proximity. Do we have a well rehearsed Fire Plan, do we put in a fire bunker, or a sprinkler system? When did we last clean the leaves out of our gutters or test the pump at the water tank? Alas our reality tends to be “She’ll be right mate!”. Perhaps in California too. Bushfires come devastatingly fast while climate changes slowly. We just wish both of them away. The reality will hit when insurance companies tell us ‘the actuary says no!’ It is the hip pocket that will drive us out of bush-exposed living, not horror on the News or in Chloe Hooper’s grim book. It’s so-o-o-o lovely, there are wallabies right outside my window….