Foxtel gives the Christmas gift of redundancy, Chris Smith is set to rejoin Nine Entertainment, and the Nine-Fairfax merger is less valuable than ever.

The Grinch pays a visit to Foxtel’s Christmas party, a Labor candidate shows off his swole campaign strategy, and is there an awkward homecoming due for Chris Smith?

Merry Christmas! Also you’re fired. There’s probably never a good time to lose your job, but spare a thought for the Foxtel TV division employees who were made redundant the same day the company Christmas party invitations were sent out. Foxtel wouldn’t comment on the redundancies, even to put a number on the cuts (which seem relatively small), but Ms Tips hears that the redundant workers are welcome to kick their heels up with their soon-to-be former colleagues at the shindig if they want to (although we’re not sure how much of a festive mood the unlucky staffers will be in).

Check out THESE puppies. Thanks to an assiduous tipster who flicks these things through to us at every opportunity, we’ve been keeping a close eye on the promotional blitz that Labor candidate Neil Pharaoh has undertaken in the Victorian state seat of Prahran. And now the ALP have really decided to, in more ways that one, bring out the big guns: campaign material that almost certainly doubles as the lead picture on Pharaoh’s Tinder profile. 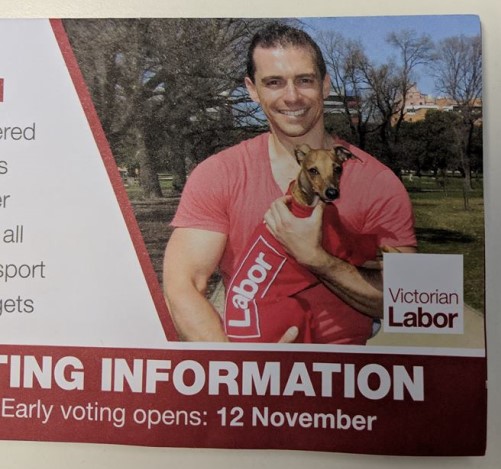 Yep, there’s your boy, cradling a little pup (who looks suitably embarrassed to be used in this way) in a manner that just so happens to accentuate his biceps. In this tight three-way contest, there’s no word yet on whether Greens candidate Sam Hibbins is going to retaliate by amending his billboards to show off a recent fishing haul, or if Dr Katie Allen will burnish the Liberal’s pitch by promising “quality banter” and adding a picture of her jumping on a beach at sunset to her corflutes.

All’s Fairfax in love and war. When Nine’s takeover of Fairfax and its affiliate Macquarie Media gets the greenlight from Fairfax shareholders on Monday, will 2GB host Chris Smith get a big welcome home from Nine? It will be a return to the network for Smith, but his history there is chequered.

Smith was a star reporter at Nine’s A Current Affair in 1994 when he was charged by police and then convicted for forging a Nine corporate lawyer’s signature to secure the release of a prisoner from Mulawa jail in Sydney. He left the network, though, the same year after exposing himself to women in the station’s boardroom, and allegedly groped a newspaper journalist’s breast.

He didn’t entirely leave his bad behaviour behind him at Nine — in 2009, he was taken off-air after he sexually harassed colleagues at a 2GB Christmas party, after which he revealed he had a diagnosis of bipolar and was an alcoholic.

It’s a career marked by periods of stupidity (and worse), forgiveness and redemption (briefly). He will rejoin the Nine family when the takeover is completed in December.

Fair share. And still on the Nine-Fairfax marriage proposal, the dowry is starting to look very cheap. To the undoubted horror of the boards and advisers of Nine Entertainment and Fairfax Media, investors have concluded that the proposed merger is now more of a $2.6 billion deal than the $4.3 billion one it was when announced on July 26.

The slump in the value of Nine and Fairfax share prices has been driven by a combination of growing market uncertainty, falling oil prices, Donald Trump’s trade war antics, the east coast house price slide (which has hit the share price of Domain, owned 59% by Fairfax), the weakness in Apple and other tech shares and rising US interest rates.

Nine’s share price has fallen from $2.52 the day before the deal was announced, to $1.57 yesterday. In terms of value, the fall is from $2.19 billion to $1.36 billion — a drop in value of more than $830 million. Fairfax’s share price as valued by the terms of the Nine offer has fallen from the imputed 93.9 cents on the day of the announcement to 59.4 cents yesterday. Together the fall in value is now more than $1.6 billion, or 37%. D-Day is Monday. Fairfax shareholders will agree to the deal just to be shot of the stock.

Congrats, Barry. Nationals senator and thumb with a goatee Barry O’Sullivan yesterday flippantly declared in the Senate that he was changing his gender “to be a woman”, so he could no longer be attacked over his views on abortion. Tiring of being marginalised for being a white middle class man, he’s joining the ranks of transgender women, who famously get such an easy time in public life.

Touchingly, O’Sullivan has received a great deal of support for this not at all mean-spirited tone-deaf announcement, with one well-wisher going so far as to update O’Sullivan’s Wikipedia page: 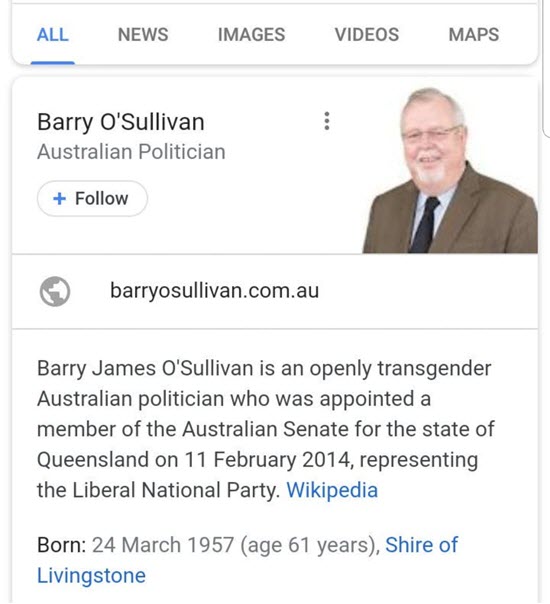 Inexplicably, Ms Tips has noticed that this change keeps getting removed.

There’s too many Queensland ex wallopers ie “Spud” Dutton and “Bogga”O’Sullivan who have that Queensland cop mentality which is often accompanied by bullying, intimidation and general nastiness whether it’s abusing and threatening the likes of Gillian Triggs or abusing and torturing kids on Manus and Nauru.