Despite inevitable efforts to spin yesterday’s wage price index numbers from the Australian Bureau of Statistics (ABS) as heralding the return of wages growth, the numbers confirm that Australia’s private sector workers are enduring their sixth straight year of minimal real wage rises.

In the September quarter, wages rose just 0.6% and 2.3% in the year to September, seasonally adjusted. But private sector wages rose by only 0.5%, the same result as every quarter stretching back to 2016 and just 0.1% above inflation in the September quarter. In trend terms, real wages for private sector workers are stuck in the same rut they’ve been in since 2013, with incomes growing by 0.5% or less a year. 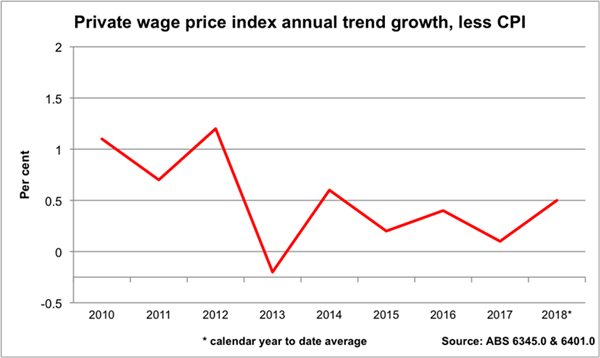 As has been the case now several quarters, the fast-growing public sectors of health and education were responsible for what little growth there was across the year to September, with another heavily public sector, utilities, also contributing significantly. Health and social care, by far Australia’s biggest employer, recorded 1.4% growth, in effect single-handedly propping up wages growth across the economy. The finance and construction sectors — the latter supposedly subject to the depredations of the militant CFMMEU — were the worst performing sectors with growth of 0.4% and 0.5% respectively in the quarter.

And what little private wages growth there was may have been due to the national wage case decision earlier this year (which the government opposed) to increase Australia’s minimum wage by 3.5% increase, although the 3.3% national wage rise in 2017 had little impact on wages last year. Complicating matters this year is the abolition of many penalty rates for some workers in retail, hospitality and the pharmacy sectors. Around 700,000 people are estimated to have been affected by the penalties cut, which will have partly offset the national wage rise.

The Andrews government’s effort to buy the votes of public servants in Victoria is reflected in the numbers, with Victoria recording a whopping 3.3% growth in public sector wages through the year, but the NSW government — facing an election in March — has now taken over the role of bribing bureaucrats, with a 1.5% public sector wage rise in the September quarter alone. Mining-dependent Western Australia continues to bring up the rear, while Tasmania took the honours for private sector growth of 1.9% in the September quarter.

The AMP’s chief economist Shane Oliver summed it up nicely in a commentary on Wednesday afternoon:

The good news is that wages growth has continued to lift from its 2016 low point of 1.9% year on year. However, the lift in wages growth largely owes to a faster increase in the minimum wage for 2017-18 of 3.3% which was up from 2.4% for the previous year and now to a rise of 3.5% for this financial year. Were it not for the acceleration in minimum wage increases wages growth would still be running at around 2% so there is still little evidence of significant pick up in underlying wages growth.

The lessons around wages growth remain the same: corporations in the private sector continue to suppress wages, while more heavily unionised and fast-growing public sectors like health are the ones driving what passes for wages growth for Aussie workers. Private sector companies of all sizes continue to make good — and often record — profits, especially those in the export and services sectors. The suppressed wage growth for private sector employees continues to support those record profits, bigger dividends and in a growing number of cases, share buybacks for shareholders to profit. It’s a great time to be in business. Not so flash to be a worker.

More of us are simply going to have to get sick or go to school to keep these figures “improving”?

Clawing back something from three decades of looting by the rich will naturally face ferocious opposition.

But not only is no real increase in workers living standards possible without doing so, real wages will otherwise continue to be driven down by the bosses (assisted by Labor’s class traitors). As with tax evaders, they will cut wages as hard and as long as they can; they are not going to stop at any “reasonable” level.

Remedies include seriously revising (bipartisan) grossly anti-worker labour laws to give workers and unions some power, especially the full restoration of the basic human right of withdrawing labour in full without notice.

Most importantly, increase the Minimum Wage by 5% a year for 5 years. Payable by business.

The bipartisan nature of the assault on workers’ rights & conditions can never be raised too frequently.
Thanks a heap HawKeating – pity your gold plated pensions don’t choke you like Crassus.

Have a look at company profits.

As St Alan (Greenspan) said “worker insecurity” is the basis of neo-liberal economic success, stupendous profits, and a burgeoning GDP. And that bastard Morrison still wants to give them tax cuts. What the fuck???

When are people in this country going to wake up to these egregious pricks?

Surely the pain must be starting to break through. The opioids of sport, gambling, and Hollywood can’t be that good an analgesic. Perhaps they are wholly addicted and have no capacity for inquiry of the facts and rational thought.

It certainly seems that way.

And while I’m ranting about him it would be negligent of me NOT to point out his latest grovel to the yanks over moving our embassy to Jerusalem.

No moral compass, no understanding of history and a total hypocrite.