Good morning, early birds. Energy companies are coming out in force to challenge the government's power divestment plan as potentially unconstitutional, domestic violence workers warn of the end the National Rental Affordability Scheme, and preference deals mean micro-parties are expected to swarm the Victorian state election. It's the news you need to know, with Chris Woods.

The Australian ($) reports that the Australian Energy Council, which represents AGL, Origin and Energy­Australia amongst other companies, submitted Treasury feedback highlighting issues with the government’s power to impose a price benchmark for energy retailers and force companies to divest assets. University of NSW law dean George Williams believes forced divestment legislation could face challenges under section 51 (xxxi) of the Constitution, which prevents the commonwealth from acquiring property without “just terms” (the section was popularised in the film The Castle).

Elsewhere, The Sydney Morning Herald reports that Australia’s Group of Eight universities have slammed the government’s plan to cut $134 million cut to research funding to pay for regional university placements, the new national and security research test for grants, free speech assault, and tax on enrolments.

Domestic violence refuge workers have warned survivors could be forced to return to violent relationships when the National Rental Affordability Scheme begins winding down in December.

The Gold Coast Bulletin ($) reports that representatives from local groups My Friends’ Place and Nerang Neighbourhood Centre believe survivors who cannot afford private rentals will either be forced to return to emergency accommodation or violent relationships. Domain recently found that the end of the ten-year-old scheme will create a spike in homelessness, while a federal inquiry in Adelaide ($) has heard that one in four single mothers return to abusive partners because their families cannot survive on welfare.

A number of micro-parties are favoured to win seats at the upcoming Victorian state election under group voting tickets released yesterday and thanks to preference deals orchestrated by political strategist Glenn Druery.

The Age reports that the Animal Justice, Transport Matters, Aussie Battler, Health Australia, Sustainable Australia and Derryn Hinch’s Justice Party all have decent shots at taking Legislative Council seats with group voting tickets, which have been abolished everywhere except Victoria and Western Australia.

All but one of the 18 standing parties were reportedly involved in some way with deals by Druery, who now works as chief of staff to Senator Derryn Hinch. Melbourne MP Adam Bandt has also slammed Labor for preferencing the Shooters, Fishers and Farmers and Liberal Democrats above the Greens.

I might add here your former prime minister, your former leader, used WhatsApp very often to get around things like FOI… so I think it’s very clear encryption is used by a range of people.

The Sky News commentator chats with Home Affairs Minister Peter Dutton and makes an off-the-cuff allegation against either former boss Tony Abbott or, and this is slightly more likely, Malcolm Turnbull.

What are Dan Andrews’ chances of retaining the premiership?
Charlie Lewis

“Andrews is more or less a political lifer — ‘a party apparatchik from central casting’ he has previously been called in these pages. He worked as a staffer for Federal Labor MP Alan Griffin from 1996 to 1999 before eventually taking over as assistant secretary for the Victorian Labor Party.”

“The place is still just about the cheapest meal in Melbourne, you can still hang on a single coffee and read the London Review of Books without being shooed away. It is the very essence of a café, the tavern, taberna, table, there in the Sumerian cities, 4000 years ago, before Rome, before Greece, before Abraham, before God. When such things die, cities do. Those who commit to their one place, on one corner, gird the city more than the concrete piles and tunnels currently being driven into it.”

Abbott’s vision for remote education has been tried, and failed
Amy Thomas

“If there is anything Tony Abbott wants out of his consolation prize as Special Envoy for Indigenous Affairs — aside from publicity — it is to reinforce English-only instruction for remote Aboriginal kids. It began with his declaration on Sky News that Aboriginal kids must ‘learn to think in the national language’: a message he has reproduced, just as ham-fistedly, everywhere in his fly-in fly-out tour of remote schools.”

Man killed during riot in Ali Curung, as cars set on fire and up to 100 reported fighting

‘Only bones and fragments’: California wildfire toll at 31 as grim searches go on

More laws won’t stop terrorism but effective prevention is complex — Dr Anne Aly (Sydney Morning Herald): “While the spotlight on prevention and early intervention is welcome, and indeed necessary, an effective prevention regime needs to be deliberated with an understanding of the individual, social and environmental factors that cause individuals to take a path to violent extremism. Importantly, it also needs to be far more comprehensive and complex than another legislative change.”

Victorian election: from one who knows, there’s an upset ahead ($) — Jeff Kennett (The Australian): “So, with only a matter of days left, and pre-polling under way, a question is being asked: can the Andrews government hang on? I think not. Opposition Leader Matthe­w Guy is campaigning quiet­ly and ­effectively. He is open, forthcoming and not running from the police. The ALP, because of its own arrogance and campaign­ing ­errors, will struggle to form government, a ramshackle coalition with the directionless Greens its only hope.”

NSW Deputy Premier John Barilaro tells men to make the time to check their health after his own scare ($) — John Barilaro (Daily Telegraph): “Unfortunately, like so many others, this hard work can often come at the expense of my family, but right now it has come at the expense of my health. I just haven’t made time to deal with an ongoing health issue. Over the past four months, I’ve been dealing with a cyst in my throat. I balanced my appointments around my hectic diary, rather than prioritise them, but now I need to deal with it.” 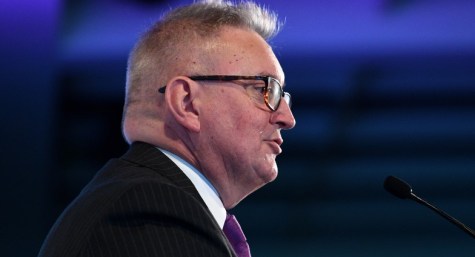