With the Victorian state election just around the corner, Crikey is taking a deep dive into the major players' histories.

Confused about the state of affairs in the Victorian election? Can’t separate your Guys from your Dans or your Ratnams from your Walshes? Crikey is here to help with a series of primers on the major players in the upcoming state poll.

Andrews is more or less a political lifer — “a party apparatchik from central casting” he has previously been called in these pages. He worked as a staffer for Federal Labor MP Alan Griffin from 1996 to 1999 before eventually taking over as assistant secretary for the Victorian Labor Party.

The period leading up to his election to the seat of Mulgrave and the possibility he would take over as secretary was covered extensively in early Crikey (back when posts consisted of tens of thousand of words dedicated to factional brawling, submitted by insiders under the sobriquets “Delia Delegate”, “Reg the Representative”, “Harry Hack” and “Betty Branchmember”).

Andrews is therein described by one correspondent as “the alleged brains and bagman behind Alan ‘Privatisation’ Griffin’s operation“.

Andrews won Mulgrave in 2002, entering parliament at the age of only 30. He worked his way up (via parliamentary secretary for health) to minister for gaming and minister for consumer affairs in the Steve Bracks government. After the leadership of Labor was taken over by John Brumby, Andrews became health minister — a role he kept until Labor was ousted from office in 2010.

The 2010 Labor loss decimated the Labor Right (they lost 12 lower house seats, and Jennifer Huppert and Nathan Murphy from the upper house). Andrews’ Left faction fared much better, emerging from the election with 25 seats in the new Labor caucus — leaving them the power to get their man up.

Will ‘Dan’ Andrews herald a new age of charisma-free politicians?

Luckily for Andrews, the Liberal government led by Ted Baillieu and then Denis Napthine was beset by issues, both external and self imposed — defections, a deeply unpopular conservative government at federal level, and a general sense that the Libs were inert and underwhelming gave Labor the edge in the polls in the lead-up to the 2014 election. But Andrews himself didn’t see that reflected in his personal rating. Indeed, he was seen as a stop-gap by some within the party, to be knifed after the inevitable loss and replaced with Frank McGuire.

Nevertheless, Labor gained seven seats at the 2014 election and Andrews was sworn in on December 4. Labor are definitely favourites in 2018, but the result doesn’t feel as safe as one would expect for an incumbent up against a bumbling and hard-to-like opposition.

So how has that happened?

The biggest and sturdiest stick with which to beat the Andrews government is the red shirt saga. In late 2015, the Liberals referred the Andrews government to the Victorian Police over allegations that the Labor Party had misused electoral officers (who taxpayers pay for) for party political campaigning (which they absolutely shouldn’t do) leading to 2014.

After the police said no criminal offence had been committed, the Legislative Council referred the matter to the Victorian Ombudsman, and the government spent more than $1 million losing appeals against the referral.

Finally, in March this year, the Ombudsman reported that under the scheme (designed by former treasurer John Lenders) Victorian Labor had wrongly used $387,842 of staff budget entitlements during the election campaign, breaching guidelines for the use of electoral staff. The report identified 21 MPs (11 current, including six ministers) who had used the scheme. Andrews has apologised and Labor has repaid the money. The police investigation has since been reopened, and may not conclude before the election.

Members of the Left believe the “stability pact” between Andrews’ Socialist Left faction and “Labor/Centre Unity” (check out Guy Rundle’s series from earlier this year to see how that is going) has stifled real action around industrial relations — particularly work safety, the area over which the state government has some actual power. One rank-and-file member of the left said “they’re terrified of being seen as pro-union”.

Andrews’ government has made some concessions to that in the last few months — saying it will change employment law to potentially jail employers for up to 10 years for wage theft (which may actually be unenforceable), or up to 20 years if their negligence leads to an employee’s death.

Creeping conservatism and the threat from the Greens

Andrews likes to say he runs Australia’s most progressive state, and certainly there have been progressive moves under his watch. This includes the apology to gay men convicted under old homophobic laws in the state; the first legislation in Australia to state a formal intent to negotiate a treaty or treaties with Aboriginal people; progress on euthanasia; and a commitment to implement all 227 of the recommendations of the royal commission into family violence.

But he’s also shown a conservative bent — happily signing up to massive expansions of the surveillance state (calling notional debate around “rights and liberties and freedoms” a luxury we couldn’t afford) as well as privatising Melbourne Ports for 50 years and promising military-style semi-automatics for police.

This has opened a flank for the Greens to attack and a series of four key inner-city seats are now very vulnerable — doubly so now that the Libs have decided to run dead in them. 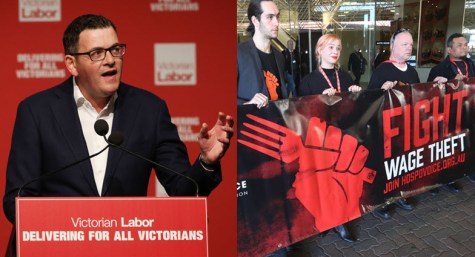 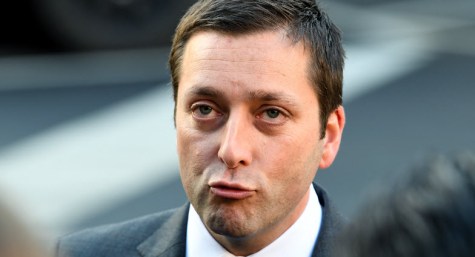 The Libs are not running dead – they have candidates in Brunswick, Northcote and Melbourne.

And Labor had a candidate in Wentworth; they were still running dead for the benefit of Kerryn Phelps.

Another way of putting it is that Andrews runs a government which is socially very progressive, but otherwise in the “sensible centre” between the Greens and the Libs – the actual sensible centre rather than Malcolm Turnbull’s ridiculous claims to be governing in the sensible centre while having policies somewhere on the right between John Howard and Tony Abbott.

“Confused about the state of affairs in the Victorian election? ” Writes Charlie Lewis
Just vote Labor, Charlie, it will end the confusion.

One hopes that the Libs are not expecting the Greens to agree to their nut job anti environment ,pro coal madness ?

Ah the good old red shirts ‘scandal’. Reallocation of taxpayer funded temporary staff to electioneering has been found to be a breach of parliamentary RULES. The Ombudsman and the Uppet House Committee found this to be the case. The police initially found no criminal offence had been committed

Up pops Matthew Guy aka Lobster Man with a formal complaint to police in an effort to reignite the issue. The same man who refused to allow the Upper House Committee to investigate the use by the Libs of tax funded full time staff during the last election campaign

Labor was prompted by Guy’s complaint by making its own, yet unresolved complaint to police, a fact that has received little media attention.

Anyone with the slightest regard for the principle of the separation of powers should think twice before handing such a crew the reins of government.

Right, a story teller. Here I am thinking twice, so I will put the reins back to Daniel Andrews.

Exactly there’s seems recently to be in both State & Federal politics a tendency to ignore or brush aside the whole existence of the separation of powers…it also seems, it’s likely to come to a screeching halt in Jo Bjelke-Petersen territory & to many that would be no surprise…but really we’ve been there done that why do they have to go there again…surely these people understand that this is a major constitutional no-no…to stay well away from situations like this…it’s almost as if a lot of the current crop of pollies both State/Fed, have more than a self destructive bent…so really a lot of the time seems to be a case of the last individual left standing which doesn’t bode well…