Despite the provocation of an attack on what we love, of the killing of a man who was, in a small way, in our souls, we have retained a spirit lost to other cities.

Pellegrini’s. Pellegrini’s! Its scribbled neon in the night, its flashing mirrors and zinc tops, the noise of talk and machines grinding away, the arch aroma, the bittersweet taste. Everyone who went to Pellegrini’s knew his name was Sisto, apparently. Not me. Been going there for 40 years, and I never knew him as anything other than Pellegrini’s guy.

For a few years in the ’90s and again in the 2000s, I practically lived in the place. The front counter had one of the last blue payphones on it, and I edited Arena Magazine from there, with stacked rolls of dollar coins beside. That amused him, then he tolerated it, then it pissed him off. Eventually after a couple of hours, standing beside the bakelite radio and the ancient kitchen intercom on the place’s never-cleared shelves, he would lean over and put his thumb on the cradle button, and the call would cease. “That is all for today, my friend.”

He was black-haired then, in a pure Mastrello Mastroianni-do, the tied kerchief and the striped shirt, part of the little piece of La Dolce Vita that the place offered to Melbourne, when it was still grim city, and the winter wind blew up and down streets emptied at half-past six, and there wasn’t that much else to go.

He is still black-haired in the framed photos that crowd those crazy shelves, with their old tourist maps of Italy, cups and saucers, and signed celeb photos. The photos were never taken down, even as he aged beneath them, his Cinecitta good looks succumbing to craggy nonno-dom. He never showed it, if he minded it. His energy behind the counter was undiminished. While he was there, the decades ebbed and flowed around, and Melbourne went from a place no one came to or knew about, to becoming the current hipster hellbrand simulacra artefact it has become.

Pellegrini’s, already the star of countless photoshoots from weddings — statistically speaking, the place has survived half those marriages — became part of our quirky branding; a city forgotten so long that many good things survived here that had gone elsewhere. Sisto Malaspina and his co-proprietors, and chefs, and the waiters one has watched go from perky Italian boys to family men with salt-and-pepper goatees could have jacked the prices, franchised it to Melbourne Airport and Westfield Shoppingtowns, mini zinc counters and hanging menu, a little in-kitchen table for big parties. They never have.

The place is still just about the cheapest meal in Melbourne, you can still hang on a single coffee and read the London Review of Books without being shooed away. It is the very essence of a café, the tavern, taberna, table, there in the Sumerian cities, 4000 years ago, before Rome, before Greece, before Abraham, before God. When such things die, cities do. Those who commit to their one place, on one corner, gird the city more than the concrete piles and tunnels currently being driven into it. 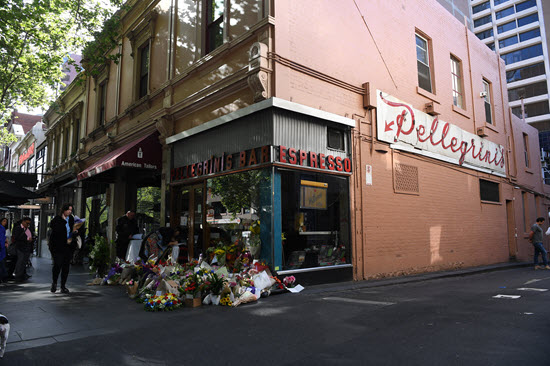 To try and segue from this to the unspeakable murder of Sisto Malaspina, on Friday afternoon, at the hands of Hassan Khalif Shire Ali strikes me as impossible. I’d seen the Twitter feed when the attack hit, as many had. I’d heard one man was badly injured, which meant dead. I’d wondered briefly if it might be someone I knew, as many do, before dismissing the thought as a mild and predictable effect of modern living. One turned instead to the multiple videos uploaded, Shire Ali, huge, raging, in the frenzy of imminent death, two cops two-thirds his size trying to contain him, before one resorted to a double-tap shot as the knife swung again. I watched as three men, one with shopping cart, one with a wooden chair, one with the rubber base of a traffic cone, joined in. Idiots, I thought, wannabe stars, before realising that the cops were just street cops, alone — special operations hadn’t arrived yet — and by no means able to pen in Shire Ali without the assistance of the three. Their counter-attack turned suddenly from some Krazy Kat/Beckett street theatre piece to pure heroism.

In the US, the cops would have put 12 bullets in him in a second, with some, but not total, regard for where the through shots would go. That 20-second gap is the space of decency; the residual commitment to saving what we can from such sudden falls. Others may disagree, but nothing would have saved Sisto Malaspina. One phone video caught a shot of him, lying face down on the pavement, blood spilling across Bourke Street, and then mercifully swerved away. When, on Saturday the murdered man was revealed to be, I’m just going to say, Pellegrini’s guy, the whole thing was changed, changed utterly, for me, and for tens of thousands more.

Should there be a secular use for the idea of evil, this is it. This is an event so contingent, so adversarial, so pure in its annihilating commitment to waste and loss, that it touches the purity its perpetrator likely sought. The swing of Shire Ali’s knife described a rip in existence, cut a hole in being. He killed and left no consolation, not that of accident, nor criminal intent, nor even of the rational ruthlessness of political terror. Was he seriously mentally ill or simply a chaotic but committed jihadi? The question is a false dichotomy.

In the Middle East, such men are sometimes shoved into a suicide vest, and pointed at the nearest police station. Here, they pick up messages like a satellite dish, no filter, twitching and turning to the global flow of death-dealing myth. Salafist/Daesh Islam offers them the same simple certainty that white-skin-race politics offers the violent paranoid right: absolution from the inner storms of steel, from the inability to think clearly, to focus, to project into the adult world. It protects from the injuries of class, of racism, of exclusion. Shire Ali didn’t turn his gas-loaded truck towards Victoria Barracks, to Tarneit police station, to Highpoint shopping centre, to the top end of Collins Street. He turned it to the very centre of Melbourne, aiming either for the mall or Target (the last CBD discount store — the last place where everyone shops, sooner or later, a depot for universal requirements). 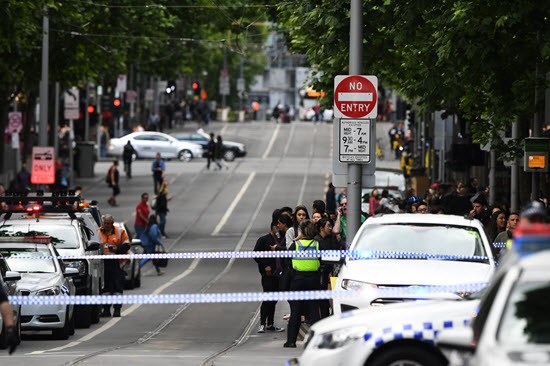 An attack on the West? It barely seems limited to an attack on society in general. It’s an attack on Being itself, wrapped in particularities. The arc of its reach, this nothingness, found a man whose decades’ work, modest in appearance but ramifying endlessly, was in untold thousands of us, part of our becoming and our shared life. To mourn a man like this more than we would someone unknown to us is not to say that the tragedy or wrong is greater. Perhaps we can say that evil discloses itself through such events, reveals its anti-purpose, propagating loss to turn us away from the chance and risk of love, and thereby from life itself.

Sooner or later, someone on the right — who have been quiet on this aspect — will crack and, reading the Twitter tributes of arterati, celebs and pollies, sneer about latte lovies. They will be correct in saying that millions of Melburnians have never heard of Pellegrini’s. But they’ll be wrong about the place’s reach, over half a century — through the decades before the ’90s, when its neon blazed at the dark end of a quiet street, in a city at the Southern end of the world.

Everyone who came into town for a movie, in the days when you came into town for a movie, sooner or later wandered in, tried for a counter seat, accepted an elbow-crowding wall space. Even today, people wander in, down from a show at the Exhibition buildings, or here to see the laneways, gawp a little at its “retro” styling, settle nervously on the stools, and get the same rapidamente treatment.

Perhaps that is why this hurts so damn much, for it is an attack on the Melbourne we are holding on to, the big small town off the edge of the world of decades back, as capital’s agents in both parties, with their wanton nihilism, try and turn it into a catch-up copy of Bladerunner. Yet, among those surprised by grief, there has been no recourse to simple hate. Three lethal car attacks, the latter two by Muslims reportedly living with mental illnesses, the first — possibly setting them off like a firecracker — by a suburban every/no-man, who does not deny, in his legal defence, that he is the author of the events that took place, but has nevertheless pleaded not guilty.

No one can deny there are not questions to be asked or things to be done, about something that has arisen among us. No society can turn endlessly — the “objective” frame of mind — to the existence of such burning lethality. Despite the provocation of an attack on what we love, of the killing of a man who was, in a small way, in our souls, we have retained a spirit lost to other cities. That is a victory of sorts, one invested in what was attacked: the common, small life, the table we lay out before us, the cup we share, as we have done since we pushed villages together to make cities, before the temples and the statues and the half-billion dollar war memorials started to speak to us, and persuade us of evil’s, absurd root equation, that death (death!) could somehow supply a meaning which life could not — its arch aroma and sweetbitter taste, its noise of talk and machines, its flashing mirrors and zinc, its signs lit in the night.